The other night I saw this in a bar, and could not figure out what it was a commercial for (especially since I couldn’t hear the sound!) It seemed kinda fishy and it turned out it was:

It’s from a 2007 PSA campaign put together by the Ad Council and the U.S. Department of Justice and National Center for Missing & Exploited Children to Prevent Online Sexual Exploitation (mouthful!) I know I’ve seen at least a couple more and they all leave a bad taste in my mouth… Here’s another one:

okay, obviously there is some sick stuff on the internet and some horrendous things have happened due to the ease of sharing information quasi-anonymously.Crazy stuff like this.

But I think what bugs me about these PSAs is that they place the blame entirely on the girl (and only young, nymphal girls are exploited on the internet!), and implies she deserves whatever retribution comes from the photos (or whatever your dirty mind conjures up, since the first ad doesn’t specify what exactly is circulating). “Think Before You Post,” while sound advice, locates the origin of internet soliciting solely in the young girls instead of pointing out other issues, like the prevalence/accessibility of social networking, non-sexualized internet abuse and bullying, the “predators” themselves, or why young girls are sexualized in the first place. In addition, the videos also don’t offer up any means of coping with the problem or how these girls might deal with the aftermath or even if they can stand up for themselves. It just instills feelings of shame and fear.

It’s contentious, for sure. Bitch touched on it in a point/counterpoint on To Catch a Predator in the “Wired” Issue (No. 39, p 20). I feel these PSAs do what Lindsay Paige Hoffman said about the Dateline special: “It perpetuates a near-mythical stereotype of powerless young women and animalistic men—a stereotype that is fundamentally disempowering to young women.” Anybody else seen similar ads? Feel similar or am I super wrong/totally creepy? Weigh on in….

The "Crazy Stuff Like This" link took me to a "page not found."

The "crazy stuff like this" link is truly crazy. I think all parties involved need to be on Jerry Springer!

I've always hated PSA's in general because none of them ever really get to the heart of the issue. It's only snapshots that only tell half the story. Plus, most PSA's are corny; and this is coming from an adult, so I would realy hate to think what teens feel about these ads.

They might as well say "Think before you leave the house without wearing a burkha".

I've never liked the scare 'em straight tactics that are often popular around a lot of this stuff; the vast majority of people you'll meet online are just regular people, and aren't scary predators-in-waiting. When you imply that a wolf is lurking behind every IM, and kids don't experience that, then it can lead to a false sense of total security. That said, learning how to make sure you're not opening yourself up overmuch is a skill that all kids (boys AND girls) need to learn.

I used to work with a lot of young girls, some of whom really didn't get the ways in which it might be problematic to have a bunch of 45-year old male 'friends' on social networking sites. A # of them would put up pictures that they *really* didn't want parents, etc. seeing, but they didn't really understand the ways in which those pictures would never really disappear once they'd been posted.

Over time, kids learn to understand about google cache, the wayback machine, reposting and the like, and they hear about the horror stories of the (comparatively few) dangerous incidents that have been sparked by online 'relationships'. But just as I *knew* that the 20-year olds who showed an interest in me as a 13-year old were 'different', they 'knew' that their online friends were 'different'. I don't think that these PSAs are going to make much of a difference, but even when kids are mocking their cheesiness, they're thinking about things, and that's better than not thinking about them.

It's inherent that a PSA is somewhat cheesey, but I liked these a little better:

But again, they focus on girls. I wonder how many boys tune this stuff out b/c it's not 'their' problem?

do they assume that just because boys generally have fist-fights that they don't bully online or post pictures of themselves online? why isn't a male posting a shirtless picture of himself deemed provocative and a girl in a cute shirt is? guys can say just as many mean things. and saying things online makes people braver...

Yeah, boys can definitely be victums of online preditors just like the case rocking Wisconsin - http://www.nytimes.com/2009/02/11/us/11wisconsin.html

The first PSA is especially creepy to me. I mean, I guess they are right. Once you post something online (like provocative photos), it's there forever. You never know who saved it or passed it on.

But, it is a shame that they do not feel the need to address this to boys/men. I hate that women are always at fault. It's just like, "Well maybe if you had not dressed that way, you would not have been raped." Hmm..

Hmm...yeah, I don't like these either. Why was 'Sarah' automatically assumed to be posting details about her underwear and tattoos...is it so far fetched that a female blogger could be recognized in the real world for some actually good blog posts that have nothing to do with her super personal details like that? And you're right--shouldn't we be focusing on why all the males in the video were creepy and stalkerish--and that being displayed as normal behavior? Yeah, I totally agree that there is a point at which you can over expose yourself on the internet, but these PSAs just piss me off. 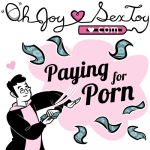