The challenge: Sell craft projects on the street to earn money to buy fabric to create a fall/outwear line in teams of three. Complicated much?

The winner: Sonjia! With a jacket I (Kelsey) am willing to kill for.

The auf’d: Alicia. Just a pant too far. These photos perfectly capture the mood of each team, don’t you think?

Not buying it.
For as often as the judges evoke the fashion industry and its many challenges, they clearly didn’t screen for salespeople when picking this season’s contestants. These designers couldn’t sell a gingham shirt to Tim Gunn! After creating their crappy “craft project” t-shirts and hitting the streets to raise cash for fabric, they proceeded to stand on the corner and creep out Manhattan’s pedestrians. I was shocked that they got any Mood money at all, given their anti-sales tactics and complete lack of charm and/or confidence. Where was Austin Scarlett and his drawers-dropping charisma when we needed him?!

Sure, the teams were a little out of their element, and they didn’t have a ton to work with since they didn’t know what the final challenge would be. HOWEVER. We’re constantly hearing on Project Runway that working in fashion is tough, and that clothes need to be commercial, and that designers need to be able to work in teams, and one day you’re in and the next day you’re out, and so on. What about the ability to sell themselves? Isn’t that just as important? Given the attention whorishness of Gunnar, Christopher, Elena, and pretty much everyone else on this show, I was totally underwhelmed by their marketing skills. If you can style your hair just so every morning and spew confessional-worthy quips, you should be able sell a dang shirt. Get after it!

Assorted thoughts:
Annalee may be under Elena’s spell, but when it comes to Team Boris and Natasha I am firmly on Team Boris. Dmitry is getting so funny! I laughed out loud when he said Elena’s clothes were like “coffins” (accurate). His zings were bested only by Sonjia, whose “Ven Effect” exaggerated yawning was pure perfection (as was that jacket!).

Project Runway gossip alert! The folks at “Blogging Project Runway” leaked the name of the finale guest judge. Hint: This “dream girl” is a fashion Idol whose name may or may not rhyme with Shmennifer Shmudson.

Next week: My girl Sonjia’s got this pattern challenge in the bag. Plus you know she and Mondo are going to be BFFs because that’s how I’ve drawn it on the cover of my Trapper Keeper. They’re all wondering how they can buy Sonjia’s jacket too.

Anna and the Coat of Many Angers
This had all the makings of a meaty episode: designers bitching and moaning at the thought of having to work in teams, reluctant interaction with the public, Ven being thwarted in his desire to make YET ANOTHER rose-inspired garment, and Elena’s increasingly nonsensical drama. (Seriously, girl, if you’re going to inveigh against “glitter and sparkle,” best not to do so while sporting an acid-green manicure and neon lips.) It also had Sonjia’s astute observation that Elena, Dmitry, and Alicia created for the street-shilling challenge “the most homeless-looking t-shirts I’ve ever seen,” and Gunnar trying and failing to use the word “pugnacious” in a sentence.

So it was a little surprising that there was so little drama when it came to the runway judging. Michael Kors, of course, can always be counted on for a series of stinkfaces, a reference to an “insane crotch,” and a weirdly descriptive putdown (in this case, that Elena’s coat looked like it “was sewn with her feet”), but Nina seemed to be phoning it in. And guest judge Anna Sui—whom I love with all the passion of a former teenage wannabe boho—seemed to not know exactly what was expected of her, zinger-wise. She, like everyone else, hated Elena’s cocoon coat, deeming it “angry” and appealing to the designers to put love into their designs, not discord, because you have to love what you do to win. Five minutes later, she suggested that Ven, Melissa, and Fabio were being too nice and respectful of one another because none of them wanted to send the others home. So wait: Throw each other under the bus, but do it with love? Because that sounds obnoxious as hell. Get your story straight, Anna!

Assorted thoughts: How fast did Gunnar and Christopher turn their frenemy vibe into something that almost seemed, well, sincerely friendly? My guess is that their mutual love of expensive wool cashmere proved to be a powerful bonding agent. Either that or they succumbed to a hate-sex session in the bathroom at Mood. (No wonder Swatch looked like he was trying to ignore everyone as they left.)

Next week: Ooooh, it’s the HP Something-Something Digital-Print Challenge! Predictions: Ven will create a patten involving geometric rose petals, which he will then pleat into rose petals, and the judges will be like, “Really, Ven, again with this?” Dmitry will be perplexed, but then whip out a black-on-black pattern that somehow works. Elena will attempt to shoot lighting bolts from her eyes. Gunnar will attempt to use the word “perspicacious” to describe something that is not that. Mondo will be awesome. I don’t know, maybe if the two of you dressed wacky you’d be more successful? Oh, wait.

“All you make are coffins!”
Given this season’s previous episodes, it’s unsurprising that a team challenge brought about Elena drama. No one wanted to be on her team. Dmitry rolled his eyes at the very mention of her. She became a stand-in for dysfunction on the runway. Maybe it’s all this Elena hate, but this week’s episode might have made me love her more?

Let’s break it down: She is HILARIOUS. Her one-on-ones to the camera are consistently great (with her Snuggie rant topping the charts this week). She’s outspoken and frequently voices the same opinions I’m screaming at my TV. Remember in the working women challenge when she battled with Melissa about the props at the photo shoot? Her team’s lack of set clutter made them look more editorial than catalogue. And Dmitry’s shawl?! My roommate has that fleece blanket balled up in the trunk of her car for impromptu reading in the park. Girl’s got a point! All of that plus the fact that her designs are ambitious and, contrary to popular Dmitry-spewed belief, extend beyond coffin-like coats. Elena is scrappy and tough to wrap your mind around, which is admirable to me.

Of course, I would by NO MEANS want to be alone in a room with her for any extended amount of time. But that’s not a necessary quality for me in the reality contestants I root for. What irks me is that the other designers want to cast her as a villain for what seems like little to no reason. She’s repetitive in her designs? Sure, but so’s everyone else (I’m looking at you, Ven and Dmitry). She’s hard to work with? Possibly, but she doesn’t make personal attacks on other designers and seems to have a good relationship with Alicia and Melissa despite having collaborated in the past. She’s a cloud of negativity? She was literally giggling in the workroom. Insane in the Ukraine, sure. But a villain of Joshua McKinley- or Jeffrey Sebelia-sized proportions? No way. She is so much more a Santino Rice than anyone else. She is a little on the loony end in terms of her designs. She argues back with the judges. But ultimately, she’s talented and what harm is she really inflicting? Do I see her making the top three? Probably not. But I am tired of her getting slammed for qualities that some of her male counterparts exemplify and get away with.

Plus, she’s winning the fan favorite vote by 15%! And has been leading for weeks! Clearly those sharp green nails and sharper tongue are charming someone else out there.

Assorted thoughts:
As glad as I was to see the button bag back, I still could not trust the randomness of its picks. Dmitry and Elena together? Christopher and Gunnar? I call shenanigans! As intentionally tension-inducing as group challenges are, I’m almost convinced of their benefit to the world, as Sonjia/Gunnar/Christopher’s mini-collection might be some of my favorite designs this year.

Next week:
MONDO! MONDOOOOOOOOO!!!!!!! It’s fitting that the designer who set the standard in terms of pattern creation and manipulation should introduce the well-worn “design your own fabric” challenge. We couldn’t see much in the preview other than something very bright coming from Elena’s corner, but I suspect that I will be unimpressed by Ven. And I’ll be curious to see how Dmitry fares, since clearly he is skilled but has shied away from most color and all patterns this season. To jump on the bandwagon around these parts, I’m picking Sonjia to blow everyone’s designs away!

The Gunn Show: As PR devotees know, this is Tim Gunn’s world and we just live in it. Each week we pick our favorite Gunn moment (tell us yours too!). This week? Sir Gunn’s reaction to Dmitry’s exposed darts. At first you’d have thought Dmitry wanted to commit murder. “Exposed darts?!?!” Then His Gunniness drew on his infinite stores of tact: “I mean, it’s, a point of view.” Classic Tim G.

Does anyone think it was strange that the exposed dart technique was used in a very similar way in a dress that Heidi wore a few weeks ago (in purple, I seem to remember?).

"My girl Sonjia's got this pattern challenge in the bag. Plus you know she and Mondo are going to be BFFs because that's how I've drawn it on the cover of my Trapper Keeper." *ALL THE APPLAUSE*

Also, the title of this recap is the best. Well done once again, Bitch.

Alicia went home. FINALLY. I could not stand her clothes or her monotone voice.

Mondo is on the newest episode of Project Runway?! I can’t believe I’m just finding out about this now! I’ve been so caught up around my office at Dish that I’ve barely had a chance to breathe, so unfortunately I have fallen behind on my Project Runway. I’m so glad I thought to record that episode ahead of time because I would’ve died if I missed the legendary Mondo! I’m also glad to know that the episode is safely tucked away on my Hopper DVR, since it has so much memory space that I never have to worry about my shows getting deleted to make room for new recordings. I am going to go watch it ASAP! Can’t wait to see your recap on the episode! 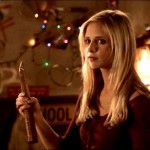