A promotional item for the upcoming, and much anticipated, Watchmen comic-to-film adaptation is confusing fans and blurring the line between sexual and supernatural fantasy. 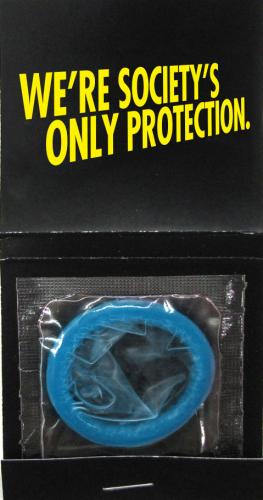 For those of you unaware of this phenomenon, Watchmen was originally a 12-issue comic series and is frequently held up as not only a seminal work of the art form, but has also been called one of the great American novels. The series is well-known for intentionally going against the conventional idea of a superhero, a fact that is leaving many fans of the series feeling uneasy about the upcoming film. This idea of contradiction is only amplified by this odd product tie-in.

While most blogs seem to be talking about this clash between the ideals of the comic series and the commercialism of this promotional item, I was first struck by the overt connection being made between sex and comics. The idea of the "fan boy" has been a topic that I have personally been really interested in lately, so seeing this opportunity for guys to essentially have sex and think of themselves as a superhero* is especially intriguing.

Some may think that a feminist discussion surrounding this condom is a little played out, since the idea that comic books are frequently a boy's club isn't exactly groundbreaking (neither is the notion of men being protectors). However, this does seem especially interesting, right? What do you all think?

* Wearers of this condom are both assuming the role of "society's only protection" and also role-playing as the (blue and nude) Watchmen character of Doctor Manhattan.

I think it's funny. If it's meant to spread a fun spirit (and action) rather then mock our lack of a penis, I see nothing wrong.

i think "protection" obviously refers to the condom and not to the person wearing it. and condoms are useful for both sexes, so i don't think that this specifically targets fanboys.

I have to agree with the previous commenters. I too think the "protection" line is just a bad pun... And honestly, I don't think this tie-in was thought through very well. But hey, if it gets more people to wear a condom, or have their partner wear one, I'm all for it.

As for the fan-boy idea, here's my thought: This condom is essentially an adult fantasy toy, like a lightsaber or a phaser. Only instead of a symbolic super-phallus (or a super phallic symbol), this toy replicates an actual super-penis. We're just stripping off one layer of symbolism. So instead of fantasizing about wielding a big, powerful, "manly" weapon that kinda looks like your penis, you instead get to fantasize that your penis has in fact become the penis of a big, powerful man... It's interesting because, to my mind, it's one thing to fantasize about feeling more manly by appropriating a hero's phallic symbol (and making it your own), but it's another thing to fantasize about appropriating the hero's actual genitals. Can you master someone else's penis, in the way that you can "master" their lightsaber, for example? Can you make it your own? Or does taking away the symbol kind of shed light on how absurd the whole fantasy is in the first place?

Like I said, I don't think anyone in the marketing department really thought this one through.

I'll agree that condoms are a good thing for everyone, and I'll also agree that this ad plays on a bad pun, but I find a hard time believing that If i wore that condom that i would be making any connection to the movie. I don't enter any kind of greek fantasy when I wear a Trojan.

I think this will end up being more of a collectors item than being used for its actual purpose. I try to use name brand condoms--they're not that expensive. Would you take a promotional, generic birth control pill? (i know its a very loose association, but it makes a point)

As a feminist given to symbolic readings, I can certainly understand the near-infinite phallic implications of the standard set of superhero weaponry, and having read "Watchmen" a few years ago, I do recall a distinct masculinist tone to the tale, however entertaining it is. But I think that as feminists we can in fact limit ourselves by simply not-going-far-enough following a symbolic reading; remember, it's possible to transform representations, and certainly possible to be a fangirl! And just as possible for a woman to wield a penile sword or gun and turn the form towards her own strength rather than avoid it simply for the purposes of dodging a symbol.
Perhaps I digress; as for the condom and its slogan, I tend to agree with some of the previous comments: it's a pun, and while one can read it as imbued with militant-phallus undertones, I can also see it as a positive thing. In so many heterosexual partnerships, particularly for younger couples, I've noticed and learned from friends that the female partner is most often the one to urge condom use. In spite of Trojan's deep-voiced ads, they're just not that cool. A humorous, contemporary, "heroic" pop-culture turn might broaden the market and the usage - not only in heterosexual partnerships, but homosexual (consider the eroticism of a courageous band of strapping boys in elastic pants!) or nontraditional as well. One can at least hope.
At any rate, I'm all for accessible, cheap, safe and easy birth control and STD prevention, so if it can be a bit kitschy, why not? Personally, I'd get a laugh out of seeing a pack of monthly pills with Buffy kicking ass by the full moon, or a morning-after pill reading "to the rescue!"

' a pack of monthly pills with Buffy kicking ass by the full moon, or a morning-after pill reading "to the rescue!" '

THAT is fucking genius, my friend.

"blurring the line between sexual and supernatural fantasy"
...What?
It's a gag condom... what am I missing? 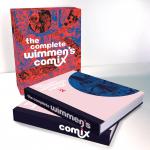 by Sam Meier
A new 700-page collection from Fantagraphics puts female comix artists where they belong: in the history books.