Peregrine Honig’s work, like her name, strikes you immediately and is hard to forget. My friend Pia would take me gallery hopping in our hometown of Kansas City, which is where I first discovered her work… If my memory serves me correctly, the exhibit was a series of porcelain plates, each with one or two Nymphic, nude girls painted on each. Honig mixes vulnerability with provocation, confusing our notions of sexuality, gender, and objectification. The fragile state of the dishware, to say nothing of the Lolitas gracing their surface, still has the ability to boldy disarm assumptions about sexuality. From pin-ups to fairytales, Honig’s work exhibits a confusing provacation, since her subjects seem emboldened either by their confrontational stare or their indifference to their own naked state. And while I will avoid the word “empowering,” it does convey a range of reactions to feelings about sexuality and society. In a 2005 interview with Venus Zine, Honig said “There isn’t a lot of compassionate work being made about young women. It’s interesting how an early or sheltered sexuality — or a very innocent kind of awkwardness — becomes its own sexuality and informs how we develop as humans, both male and female.”

With themes as such, the Honig was drawn to the Olsen Twins, who seem to embody the unfortunate intersection of a robbed youth and inevitable objectification. Is there nakedness further sexualizing them or is it a return to innocence? Is Honig’s paintbrush any less harsh in the treatment of the celebrity twosome? Or is she simply acknowledging the inherent objectification and sexualization women and girls are bound to face?

Other feminist themes are found in her series “Fashism” which explores an obsession with high-fashion excess while trying to retain a feminist sensibility. Doily
Of course, it helps to have a sense of humor… And before you pass her off as another twee painter (it’s easy to get jaded in Portland, land of the ubiquitous owl and deer motif), her bird bent is political. Honig explained the symbolism behind the mourning dove involves reproductive rights and domestic displacement policies in America, and sees birds as “poverty jetsetters.” From Art the Vote:

“They find a spot, build a nest out of existing material, and hope other birds, the environment or city planners don’t come around and claim it. I have collected fallen nests for years. My friends and family bring them to me. I am most in love with the ones that are clearly a product of shredded paper fallen from a downtown corner, another packed with ratty tape from an audiocassette. These nests were my base and inspiration. My recent drawings are not the product of ornithology, but rather urban policy….Using commercial formats to deliver social and political imagery legitimizes ideas to a larger audience.” One of her first collections, Ovubet, was snatched up by the Whitney in 1999, no small achievement for a twenty-three year old. Peregrine continues to work in Kansas City, and can be found in the Kemper Museum of Contemporary Art. Plus she curates her own gallery, Fahrenheit. Sometimes I used to catch her behind the register at Birdies, a teeny-tiny underwear store that I’m pleased to see is not only still around, but has expanded its collection! Are you a member of the panty of the month club yet? 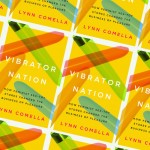