Push(back) at the Intersections: Women in the Fall Television Forecast | Bitch Media

Push(back) at the Intersections: Women in the Fall Television Forecast

We’ve got five new shows coming up with women on the creative team and I thought, as I wind up my time here, that I’d delve into them to see what we have to look forward to this fall/spring, and to see what kinds of women-led television make the brutal cuts of pilot season.

It’s notable that these shows, for the most part, aren’t being created by women writing about women’s experiences. Evidently the networks feel that such a thing wouldn’t be very interesting to members of the general public.

In romantic comedy land, we have Love Bites on NBC, with Cindy Chupack and Shelly McRory on the creative team. ‘…a series about love, and all the crazy things it makes us do.’ Well, that sounds promising. I’m sure Love Bites will be breaking down a lot of social attitudes about women and mental illness. ABC is bringing us Better Together, with Shana Goldberg-Meehan as executive producer and writer. Given that it’s starring three very heterosexual couples, I’m sure it will really explore LGBQTAI folks and I’m totally looking forward to it!

For our cop dramas, CBS is airing Blue Bloods, a show revolving around a male character, with Robin Green and Mitchell Burgess on the creative team. Who wants to bet that all of the problems will be blamed on Green, while Burgess is credited with the show’s successes? The Peacock is stepping up its game with Chase, a drama with a woman at the heart of the action for once. U.S. Marshal Annie Frost is at the center of ‘a lightning-fast game of cat and mouse that drops you right in the middle of the action.’ Jennifer Johnson is one of the executive producers on the show, but she’s only a quarter of the production team, so I’ll be curious to see how much influence she has.

Finally, we have Off the Map, a Shonda Rhimes creation, scheduled to start in 2011. It’s another medical drama, set in a small hospital in Latin America. Prepare for some ‘redemption of middle class people from the United States through hardship and adversity,’ folks!

If I sound a bit harsh on these shows, it’s because I am. But this is not necessarily the fault of the creators. Some very interesting pilots came out this year and didn’t get picked up, and we can’t blame the creative teams for that. It’s the fault of the networks, and indirectly it’s our own fault, because the networks pick up the stuff that they think people want to watch. And if creators cater to what will get picked up, rather than what they actually want to do, well, I can’t blame them for that either. Even television producers need to eat.

The only way to get shows created by women that challenge social attitudes and provoke viewers on the air is to make it clear that we want to watch them. Likewise, shows created by people of color, non-heterosexual folks, people with disabilities, and transgender people.

Now, it’s possible that at least one of these shows is going to include layered social commentary. I’d put my bet on Off the Map for that, despite my biting comment about the show. That’s because I trust Shonda Rhimes more than the other creators here, and I think that she has the most potential to pull it out of the hat when it comes to subverting social attitudes and challenging stereotypes.

There are two other shows I’m interested in, for different reasons. Undercovers is a spy series featuring a woman of color, Gugu Mbatha-Raw, in a leading role. It’s also created by J.J. Abrams, who wins a lot of points with me for Alias (a hardly perfect show, admittedly). At least I’ve seen Abrams write strong female characters, and there’s a potential for the show to go in some interesting directions. Maybe.

Hellcats, airing on the CW, appears to be a bid for some of the glory of Glee. It’s a teen drama that revolves around a college cheerleading team, and I suspect that it’s going to contain sky high levels of camp, as was confirmed during my viewing of the pilot. Alas, like Glee, it seems to be taking itself seriously, suggesting that it’s going to contain Commentary On Things. Which is a pity, because I would kind of love to watch a popcorn teen drama this fall, and instead I suspect I’ll be throwing things at the television again. Will Hellcats succeed where Glee has failed? I guess we’ll find out.

Are you looking forward to anything in particular in the 2010-2011 television season? Still mourning anything that’s not scheduled to return?

I'm going to miss ABC show Kyle XY. They left it on such a cliffhanger with season 2 that I would love to see them do season 3 but sadly the show wasn't getting enough views and they canceled the making of season 3. At least there is The Big Bang Theory to look forward to.

Exactly. I think I have said this on this site before but the product of the TV industry is not show it is viewers, that is what it is sell. And Viewers aren't the customers, advertisers are. So every moment you spend watching a show you don't like or you think should be taking off the air is just like donating money to an organization whose cause you oppose. Your attention is their capital. We think about TV like we think about movies and books and other type of pop culture but the business model is really different.

This is an astute assessment on the status of women-centric programming on network television. I am relieved that we have backed off of the Lipstick Jungle fare and even feel the bloom fading on the Desperate Housewives apple, but we continue to allow our primetime programming be defined by limited character roles for women and their equally limited social domains (the investigator who is a mom, the career-hungry lawyer really looking for love, etc...). It would be great to see some networks take risks and shake up these formulas. I am also wondering what you or others think of alternate programming sites such as cable and web development and the potential for these outlets to reach diverse audiences by offering sexually, gender, racial, and socially diverse female characters. Thanks! 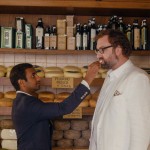