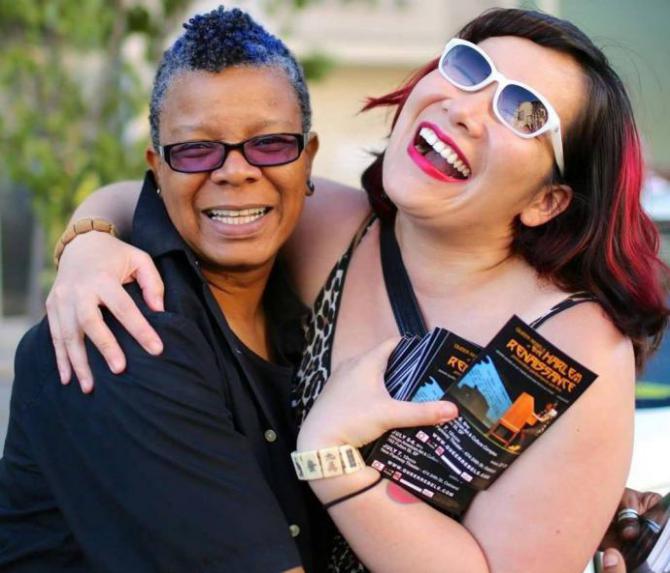 In the midst of rapid gentrification from The Mission to Bed Stuy, in the loud boom of displacement, police violence, and the of deaths of our kin and our loved ones, we mourn. We mourn with shouts, with silence, with long strides, with feet firmly planted, with others, and by ourselves. But when do we celebrate? When do we celebrate ourselves, our roots, our bonds, our bodies, our histories, and our futures? Queer Rebels Fest is our time.

Queer Rebels Fest is a brand spankin’ new two-night performance extravaganza on Friday, May 29th and Saturday, May 30th at the African American Art and Culture Complex in San Francisco. The festival highlighting the work of queer and trans artists of color is part of the kick-off for the city’s 18th annual National Queer Arts Festival. Each night, the show will include a line-up of performances by rainbow rabble-rousers who work in all different kinds of artistic fields, from drag queen Persia to Black futurist Wizard Apprentice to poet and martial artist Ryka Aoki.

Queer Rebels Productions was conceived in 2008 as a collective dream by the power couple/dream team Celeste Chan and KB Boyce to build artistic space for their communities and to amplify their voices and visions. Chan and Boyce sought to not just open doors for queer and trans artists of color, but to break the doors down. They want to foster intergenerational collaboration and to “honor our histories with art for the future,” as they put it. While Queer Rebels Productions are widely known in queer communities from coast to coast for their film screenings, salons, and performance events such as Queer Rebels of the Harlem Renaissance or SPIRIT: A Century of Queer Asian Activism, this two-day festival is a new idea. The festival is about “acknowledging our histories, celebrating our resilience, and building power,” say Boyce and Chan.  “It is timely, we think. We’re in a state of emergency with race in this country. We’ve seen the deadliness of anti-Black racism—it’s not as though Civil Rights ended and now we’re all good.” Rather than focusing on one time period or one facet within the QTPOC artist community, Queer Rebels Fest aims to tackle the connections and conflicts that often go unheard.

Eight of the performers slated to take the stage at Queer Rebels Fest.

Boyce and Chan know about the complexities of racial hierarchy and colorism firsthand. “As a Blasian couple, we work in coalition—and honestly it is not always easy,” they state. They want to festival to ask big questions: What makes community? How do we actually see each other? How do we build bridges? How are we addressing anti-Black racism in Asian American communities. The festival is meant to be a call to arms and a chance to learn about other peoples’ histories and points of view. This is about honing the multiplicities and complexities of the lives of queer and trans artists of color, allowing for space to build and create together, because there is more power in together.