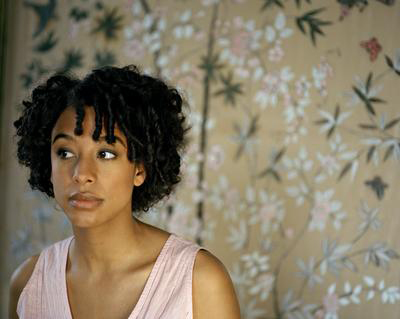 Works by two mixed-race Brits—musician Corinne Bailey Rae and writer Zadie Smith—have recently been profiled in the New York Times. Both women navigate their collective white and Caribbean ancestry by embracing hybridity instead of relegating themselves to one group. Their doing so challenges entrenched American notions of race that say that multiracial people must choose one ethnicity or another, not all.

The English-Jamaican Smith, who rose to fame upon the publication of her 2000 bestselling book White Teeth, regards Zora Neale Hurston and Barack Obama as her sister and brother in arms. In her new book of essays, Changing My Mind, Smith praises Hurston for making "'black woman-ness' appear a real, tangible quality, an essence I can almost believe I share, however improbably, with millions of complex individuals."

Although Smith uses the term "black" to describe herself, in Barack Obama, she finds a multiracial hero, a man whose racial background gives him a "flexibility of voice" that she hopes leads to "flexibility in all things."

According to Smith, the moral of Obama's story is that "each man must be true to his selves, plural," writes Times book reviewer Pankaj Mishra. Smith's overall message is "that those who live between cultures best represent and articulate the human condition today."

But how do we define who lives between cultures? Aren't we all doing so, mixed race or not? Obama, for one, doesn't embrace a pluralistic world view simply because his mother was Kansan and his father, Kenyan, but because he grew up in Muslim Indonesia and Polynesian Hawaii and the African-American South Side of Chicago. In the 21st century West, where people from a variety of backgrounds inhabit the same spaces and neighborhoods, it's increasingly difficult not to adopt a multicultural mindset. The Los Angeles I live in, where the latest food craze is Kimchi tacos, is nothing like the city depicted in the Oscar-winning film "Crash." And that's good news. It means that whether our parents share the same cultural backgrounds or not, we're more likely to reflect the variety of cultures to which we've been exposed—in art, literature, music or politics.

Mishra, however, implies that Smith may be romanticizing hybridity.

"Having hybrid identities, not belonging anywhere or indeed belonging everywhere, may have its advantages, but these attributes must still contend with pressing circumstances like the voraciousness of 21st-century capitalism," Mishra writes. "Far from floating free in a state of unbelonging, most people are trapped in predetermined social and political positions; they must act within the history that surrounds them."

Valid points. Yet, it's easy to see why Zadie Smith—who went from the working class London neighborhood of Willesden Green to Cambridge University and, from there, on to literary superstardom—would not regard social position as fixed or static.

For singer Corinne Bailey Rae, whose mother is white and father is from the West Indian island of St. Kitts, being mixed-race had a direct impact on her music. Now, 30, Bailey Rae gravitated towards grunge in her teens.

"I loved that P J Harvey and Courtney Love had this sexuality that had nothing to do with the male gaze, it was 'This is how I want to look,'" she told the Times. "It made me feel like there was something defiant about being a black girl with short hair and an electric guitar."

Her late husband, the musician Jason Rae, who was white, influenced her to embrace soul music. When he exposed her to the songs of Ray Charles and Stevie Wonder, Bailey Rae felt that she'd reached a turning point. And while her self-titled 2006 debut album was more pop friendly, her newest release, "The Sea," reflects her love for a variety of musical genres, most notably rock and soul.

"For the first time I felt musically unified. Being a mixed-race person," she explained, "that mishmash has always made sense to me. People have always been like: 'Do you like black music or white music? Do you like soul or indie stuff?' It's like, aren't I allowed to like all of it?"

Great piece! I think the final quotation gets at a really important point about cultural hybridity which is that however comfortable the cultural hybrid may feel about their own subjectivity, structurally, from the outside, there will always be a negotiation across multiple nodes of identity demanded of them. That hybridity isn't some unproblematic fusion that comes as the result of being culturally mixed, but an ongoing process of articulating complex and at time contentious points of cultural contact.

I liked your point too that many of us, to varying extents, live between cultures. The weird biological origins of the hybridity metaphor lends to a creeping essentialism in the popular discourse. The presumed alignment between mixed race/origin and a pluralistic understanding of the world feels too neat and too absolute, and it was an important reminder that we all touch upon hybridity in some manner, determined not just by origin but by context.

I am a huge fan of both these artist. There work appeals to me like no other novelist or singer.

What I take issue with is the fact that Zadie thinks of Mr. Obama as "mixed race" and herself as "black"? How is this when Mr. Obama clearly identifies himself as black? The fact that his mother is "as white as milk" as he puts it does little to change the fact that he is a person of color in this world, or for clarity (a black or brown man). Meaning: Obama does not look white. Zadie's father is as white as milk also, but she just so chooses to identify with black? Gimme a break. Although she also does not look white.

If Obama looks nothing like his mother, then Ms. Bailey certainly does not take the color of her mother who is also as white as milk. Corinne I think is a little more soft spoken about standing on her Africanity. Where am I getting at here? W.E.B. DuBois said it best, "the problem of the twentieth century is the problem of the color line." Yes we are in the second decade of the 21st but nonetheless still operate from the dynamics of racism and colorism.

If blacks are confused at this point about color and identity, then I can imagine how it must be for those who are biracial or have a double consciousness. It is not that simple to say you are not defined by color--especially when you were born into a world that either values or discounts you based on your color. Navigating race is perhaps the most difficult thing a person can do because there is so much gray yet their is still the perception held by many of the superiority of whiteness and anything associated with it. I do not care what anyone says; we do choose our romantic partners based on color, where we live, where we work and sometimes where we dine. At this time in history, it is almost unnatural in a color driven world not to.

Unless you were born in africa of black african parents, every black person in America is multi-racial. If there is an element of blame involved aim it at slavery in America. I, myself, am of mixed parentage: my mother's parents were both black and my father's mother was black and Seminole Indian and his father was a Canadian Jew. My daughter is a mixture of black and black/ portugese from her father's lineage. For the record, we cannot expect "multi-racial" people , like Corinne Bailey Rae or Zaida Smith to choose sides, black or white, while black people go around singing along with the Beach Boys, Captain and Tenielle or the Wham! while shopping in the grocery store. Just be yourelves, whatever you are, and embrace your culture-whatever it is.