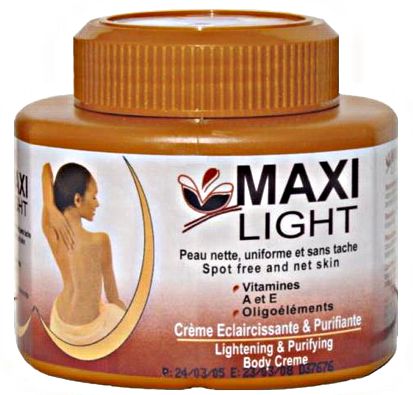 Dermatologists are seeing a rise in the number of women with skin problems stemming from bleaching creams. Thinning of skin, bruising and acne are some of the adverse effects doctors have noticed. Despite the risks of skin bleaching, sales of lightening creams are strong, the New York Times reports.

Part of the problem is that ethnic beauty supply stores and online merchants are selling prescription-strength lightening creams over the counter, the Times reports. The creams often contain steroids, and some even contain mercury, which can damage the nervous system.

Why do women of color use these creams?

Some users turn to lightening creams to fade dark marks caused by acne or scarring, a skin problem known as hyperpigmentation. Others, however, aren't using the creams as spot treatments but to uniformly lighten their complexions because of social pressures.

"Sociological studies have shown among African-Americans and also Latinos, there's a clear connection between skin color and socioeconomic status," explained Evelyn Nakano Glenn, president of the American Sociological Association. "It's not some fantasy. There is prejudice against dark-skinned people, especially women in the so-called marriage market."

A cursory glance at the most desired female celebrities of color proves Glenn's point. The pop culture machine continually churns out stars the complexion of Halle Berry, Beyonce, Thandie Newton, Tyra Banks, Rihanna and Alicia Keys. Meanwhile, darker-skinned vixens such as Gabrielle Union remain few and far between. The same disparity plays out in Spanish telenovelas and in India's Bollywood films. The most desired women are fair-skinned, while dark-skinned women play the roles of maid, best friend or mom.

"In fact, it's a growing practice and one that has been stimulated by the companies that produce these products," Glenn said of skin bleaching. "Their advertisements connect happiness and success and romance with being lighter skinned."

The ugly truth is that skin lightening creams are unlikely to give these women the even-toned light skin of, say, Mariah Carey. Worse is that long term use of these creams may result in hypertension, high blood sugar, suppression of the body's natural steroids and permanent stretch marks. Not so beautiful, huh?

Despite such risks, you can bet that dark-skinned women (and men) will continue to use them. Lest anyone write these women off as merely vain, it's important to note that those who use them not only suffer the effects of racism but also of colorism in their respective ethnic groups. Having dark skin may mean being doubly marginalized—first, in the white-dominated mainstream, and, second, in communities of color. As long as racism and colorism exist, there will be a contingent of people of color wishing to lighten their skin, no matter how beautiful their natural coloring.

This is so true, and so saddening. I've always wondered why in most cultures, darker-skinned people face much more prejudice. This is true even in non-Indian Asian cultures! My mother was a dark skinned Burmese, and she faced a lot of prejudice from lighter-skinned people. In Asian (and I'm sure in Latino and African-American) cultures, they take it even farther to include blue colored contacts.

I just wanted to point out that these bleaching products are also extremely popular for the fair skinned asians as well. My pale Chinese mother (and her Chinese friends and sisters) are addicted to these creams because they want to look even more pale because the paler you are, the younger and more beautiful you are. I think its ridiculous because one, they are already pale, and secondly, it's so bad for them! My aunt complained about getting rashy and my mom told her that her skin will get use to it. :( Everytime my aunt goes to China, she comes back with packs among packs of these creams to pass out.

I don't understand the dark skinned prejudice at all! Some of the most beautiful women I've ever met have been VERY dark skinned. I think it's gorgeous.

During my stay in India, every couple minutes on the TV stations I would see ads for skin bleaching products, and they weren't for spot treatments. They would show a woman split in half comparing light skinned face to darker one, or a transform in progress of her face, neck, and any other skin showing. It was outright called the way to be beautiful. Even knowing ahead of time about the dark-skin bias there, it really shocked me how open it all was. There were also many billboards and products in little stores you'd see wandering the streets, so not just for those who could afford TV.

In fact I noticed a guy walking across the street one day who had clearly been using skin bleachers for a long time, as his skin seemed artificial and strange (as opposed to some genetically-based skin discloration or albinism) and looked flat-out damaged from it. It was really sad. Sort of overwhelming, made me think of previous decades in the U.S. when these products were sold openly to African Americans as a standard of beauty.

How do people explain the "tan lines" where treatment stops?