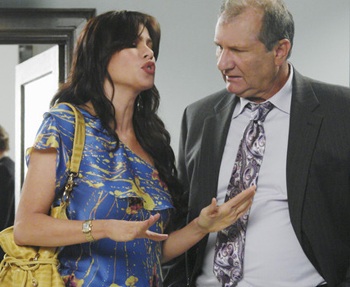 Ah, Modern Family. Hot off its Emmy win for Outstanding Comedy Series, the show's second season continues its signature mix of fairly solid writing, humor for all ages, and heartwarming lessons on life and love, all wrapped together in a neat bow by each episode's end. When the show made its debut, I was intrigued at the prospect of a mainstream TV series that showed blended families, a same-sex coupling, and a loving and lasting relationship between people of different cultures. It's not often that one gets to see happy Latino families on TV (you can have The George Lopez Show—I'll take Que Pasa USA. Plus Maria and Luis from Sesame Street), and it was a relief that U.S. audiences would get to know the pure, unadulterated delight that is Colombian actress Sofia Vergara. But, as happens every time I build my hopes up over the casting of a Latina character (Salma Hayek in Fools Rush In, The Seven Hundred Actresses Who Played Marta in Arrested Development), much of the humor surrounding Sofia's character, Gloria, is done at her expense and at the expense of her background.

While I appreciate the difference between a racist (or xenophobic) joke and a joke about racism, I feel as if Modern Family's writers don't always understand that distinction. Sometimes, I just feel like throwing my hands up in the air, cueing the dramatic telenovela music, and asking, "Really? We're still making 'sneaky immigrant' jokes in 2010?" I mean, come on. Take this zinger from the show's first season: "I thought one of the advantages of marrying an older guy was that I was going to be able to relax. But all of this swimming and running and rowing, it's just like how some of my relatives got into this country!" Womp womp. Because so many Colombians, you know. Swim to the U.S. This is to say: I enter into this particular post with a bias, and with an agenda. You've been warned.

In this week's episode, "The Kiss," Gloria dreams that her dead grandmother wants her to connect to her roots by preparing traditional foods, despite the fact that, just last episode, we saw Gloria cooking up a shit ton of empanadas. No matter, we need a plot device! And food is a logical choice. Being a spicy and lusty people in touch with all that is carnal and sensual (ask any casting director), we Latinas are big into food. It makes us all steamy like, say, water for chocolate. Of course, the pairing of women of color and food is a common one throughout literature and movies popular with, or meant specifically for, an audience that may not share this experience. Place a Latina character in a boardroom and she can be anyone. Put her in the kitchen, and the audience can better connect; it's an obvious physical demonstration of what are seen as inherent qualities. Heat, spice, fire—all describe both popular conceptions of Latinas and food. We are hot tamales, after all.

That observation (/suspicion) aside, sure, yes, food is also a natural and appropriate means of connecting to one's past and culture, regardless of where one hails from. In any case, Gloria's interpretation of her dreams, and her insistence that her abuela is "still with us," is met with what is quick becoming characteristic derision from her husband, Jay. As a viewer, I find myself wondering what these two characters saw in one another that prompted them to want to get married in the first place, as well as questioning how well they know one another, since it seems that every time Gloria or her friggin' adorable son, Manny, say something related to being Latino, Jay is either perplexed or dismissive. Does Jay not have an interest in learning about Gloria Colombian roots? He'll probably want to work on that, considering her background is referenced in nearly every episode. Their interactions, while offering a platform for pat life lessons on love and tolerance and all that mushy good stuff families should have, seem not quite modern. Should I be looking to postmodern families for inspiration instead? 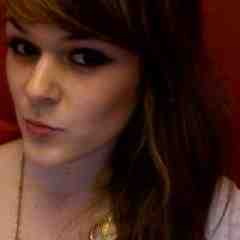 While I'll give you that zinger in the first season, I really think the writers have come a long way since that episode. Take "the kiss" episode, for example. Don't you think that Gloria was (and usually is) the powerful person in the relationship with Jay? By making up customs that supposedly came from her grandmother and making a fool out of Jay, she was mocking his xenophobia and being clever & funny to boot. I don't think the show is perfect, but on this point I think the writers are getting better with each episode.

hmmmm.....
some of what you say is undeniably true but i got a much different vibe from "the kiss". gloria had her abuela on her mind and wanted to celebrate and share her columbian roots with her new family by making a special dinner in honor of her abuela, not just another batch of empanadas. her husband makes fun of her so she fools with him in hilarious ways. so what? like the other commentater says, she sort of has the upper hand- and jay does make it up to her by trying to learn more about her culture (even though what she says is fake). and i think in the first season everyone was mad because they DID marry to early and jay did marry a younger woman (presumed a gold digger-which i dont think she is.) that he didnt know much about, but they were in love and as the show progresses they still are in love with each other. so while she and her marriage to jay is on the outside a stereotype, underneath it is all very sweet. so im telling the author (who has a biased agenda, i am warned) to just wait it out and let the layers peel back because this is a very well done show.
i hope i made sense...

p.s.
im mexican-american and when my friends joke about me being able to jump fences faster than anyone else ("dang, you so mexican, girl!") i laugh because most of my relatives DID do that (i dont think we swam though, so that IS a sterotype!). its in da blood lol.

Oh God, I forgot to capitalize and use proper grammar. That just makes what I said sound so stupid...sorry.

My dad's white and my mom is colombian so every little thing that happens between jay and gloria on the show can't help but warm my heart. I'm very biased. But I completely agree that some of the jokes she makes, or that are centered around her, play on really hurtful stereotypes-- not just the spicy Latina food thing, and not just the immigrants "swimming" here (I've never heard of colombians doing that anyway, have you? I guess if they managed to float their way through the Caribbean...) but also the Colombia-specific jokes about violence and drug gangs, as in the militia busting in on her first wedding and her ex-husband being some kind of mysterious drug-related criminal. I hate that Colombia and latinos and general are most recognized by these silly jokes. It hurts my brain a lot. But I can't help but laugh. At least she's a loud Colombian immigrant distinguishing herself, refusing to assimilate. I really appreciate the way she sticks up for herself and colombian culture. In fact, she basically is the boss in the house (much like my mami). Her relationship with jay is a great example of how americans can exert pressure on immigrants to assimilate/speak more english/not be so weird and crazy (jay flipping about all the Spanish and Colombian food completely is my dad), and she stands up against it with pride and strength, managing to be autonomous and have a happy and understanding relationship with jay at the same time. see america? it is possible for immigrants to keep their culture and still love you! she seems to be saying. At least, that's how I feel about it. On the whole she makes me happy.