Annie Murphy is a Portland-based artist whose new comic is making waves in the self-publishing world. Murphy discovered the title of her historical/biographical/autobiographical comic "I Still Live" written on the tombstone of 19th-century spiritualist Achsa Sprague. At the age of 20, Sprague came down with a joint disease which caused her to spend the next six years bedridden. But in November of 1852, Sprague was revived and credited her convalescence to the presence of angels and spirits. Her reconstitution inspired her to tour throughout the United States and Canada, spreading not only spiritualism, but women's rights as well. Murphy happened on Sprauge's story while studying at the Center for Cartoon Studies in Vermont (where out of thirty-six cartoonists at the Center, ten were women--as were half the applicants--which "which is refreshing because comics have traditionally been a boys club") and the fifty page book ended up being her thesis project.

In an interview with Vermont Women Magazine, Murphy says "I have a passion for discovering the stories of fascinating women in history who have been almost lost to obscurity." Check out this excerpt from the comic which highlights other leaders in the Spirituality Movement who also participated in other social movements of the 19th century (it has Adventures in Feministory written all over it…except for maybe the "Sex Magician.") Spirituality was one of the things that drew Murphy to Sprague in the first place, and it infiltrates her work as an artist. From her blog:

"I believe comics and other sequential (and non-sequential) arts have their own divinatory qualities. I believe this magic comes from the system of symbols, words and imagery used in comics and their opportunity to combine in ways that engage both the right brain and the left brain, allowing our minds to absorb information and patterns on multiple levels while experiencing (reading and creating) comics as a unique meta-language. Images have been used to convey deep levels of meaning for thousands of years."

Murphy's attention to spirituality and drawing is even more apparent in a new series posted on her blog: an A to Z of symbology. Not only has Murophy's ability to combine historical biography with her personal story been compared to Art Spiegelman's Maus, the Comics Journal ranked it third in 2008's Best Mini Comics, and it was a recipient of the Xeric Foundation's grantfor self-publishing. Alison Bechdel herself called I Still Live "a masterful hybrid work…Part adaptation of the spiritualist Achsa Sprague's diary, part history book, and part memoir, it channels the past into the present in a haunting and vivid way." 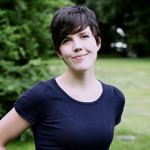