Raising Trouble: In Defense of Brangelina

“Raising Trouble” has been silent for too long on the absurd hubbub surrounding Brangelina “dressing Shiloh as a boy,” which has been burning up the blogosphere and the celeb media all year, and shows no signs of ebbing anytime soon. Responding to pictures of little Shiloh Jolie-Pitt with a short haircut, Life & Style magazine put the scandal on its cover last month, asking plaintively, “Why is Angelina Turning Shiloh into a Boy?” 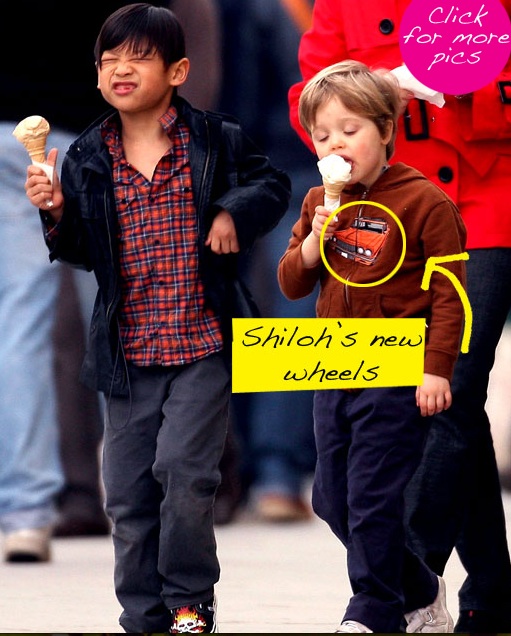 Bonnie Fuller is only one of hundreds of offenders, but I’m going to single out her out here because she so comprehensively sucks. Fuller – former editor of US Weekly and Cosmo, infamous for making those magazines even more vapid than they already were – has probably perpetrated even worse crimes against humanity than publicly scolding a three-year-old for gender non-conformity. But reading her blog is a shocking reminder of the retro-stupidity of her magazine career. Here’s Bonnie, accompanying a (mad cute – see above) photo of Shiloh and one of her zillion siblings with the following inspired commentary: “But – we gotta ask – what’s up with the car on Shi’s jacket?” and, “You don’t have to be pretty in pink tutus to prove you are a girl but seriously?” Then we are invited to see more pictures of “Shiloh dressed as a boy.”

A poll – not the first on this subject on this site! – exhorts us to weigh in on Shiloh’s “tomboy” gear. Do not read the comments – it’s my job to read them for you and I promise they are truly, truly depraved.

Brangelina – in all its drama, idealism, conspicuous adoption and excessive procreation - is easy to mock. But the kid looks content eating her ice cream in her car shirt. If anything is more important than that, we as a society need serious therapy.

G-d forbid that a set of parents lovingly let their child express themselves. When I was a kid I was exactly like Shiloh - I loved wearing my male cousins hand-me downs, insisted that I have short hair (and was mad my mom wouldn't let me shave it), and played "boy" games.

I grew up happy, fine, well-adjusted, and self-assured thanks to my parents letting me express myself. Ironically, it's hard to get me to wear anything but a dress these days, but that's beside the point.

There is nothing wrong with loving your child for who they are. Shiloh does not need to be "made" to be a girl - like any kid she just needs love and encouragement from her parents.

I'm so glad you wrote this. Jezebel posted this http://jezebel.com/5480503/why-the-gossips-find-shilohs-tomboy-attire-so... about the issue a couple months ago and I discussed the normative gender expectations in the Women's Studies classes I teach at great length.

I remember when 20/20 did (in 2007) a piece on transgendered children. It focused on this one girl, Jazz Jennings (name changed to protect her and her family), who was born male, but decided at an early age that she was a female. Her parents decided it was best for Jazz to live the way she wanted, and they allowed her to pass as a girl. While this particular story was controversial at its time, it's important for people to realize that gender (male/female, masculine/feminine) is completely a cultural creation. As Judith Butler explains, we perform our gender, and we are not inherently male or female. So if Shiloh wants to look (or even act) as a boy does, then let her! Congrats to Brangelina for getting this one right!

Innate differences!
We are sexually discriminated as soon as we are born. Our mothers make us wear pink if we're girls, blue if we're boys. It's not normal for a girl to wear a shirt with a truck, it's not normal if a boy wears a shirt with a heart. I mean--what the hell?
Think about it--Does it REALLY matter?
Hell, wouldn't it be damn nice if we can just wear whatever style of clothing and no one would ***** about it? Boys wouldn't be teased about being gay for wearing pink or skinnies and girls wouldn't be teased for being "tomboy".
My goodness, we humans have ****ed ourselves over!

Despite my irritations with the parents in question, I can't help but feel impressed. It also makes me wonder about choices—is Shiloh making choices to dress this way? I'd imagine—since her other daughter, Zahara, doesn't seem to. Also the fact that Shiloh's mom is often dressed and presents as feminine as is humanly possible, makes it awesome that she's being allowed to dress how she pleases.

Ultimately, it reminds me of the amazing, Ma Vie en Rose:
http://www.youtube.com/watch#!v=g0b0F8HAJgI&feature=related

I was foolish enough to respond to one of those polls on how right or wrong it is for Shiloh to dress like a boy, but I made my case, I'm sure I've made it here, and I'll make it again so that as many people as possible can see it. When I was between the ages of 3 and 5, like Shiloh, I thought I was a boy. I called myself Ricky, wore boys' or unisex clothes with tall striped tube socks (it was 1983), and with many thanks to my parents, I counted cars and trucks among my toy collection. My hair was pretty short and would have hidden my gender completely if my mother hadn't put barrettes in it. One day, I accompanied my father on an errand and was wearing an entirely blue outfit and had shaggy, slightly longish hair that could have easily been seen on a boy. The man behind the counter at the lock shop kept addressing me as "Sonny" and I didn't think anything of it until Daddy quietly told him I was a girl. The point of all of this rambling is that so many kids go through these phases and turn out fine one way or the other. I still pride myself on being slightly tomboyish at age thirty, and I have a loving boyfriend who accepts and admires it. If a child does this and ends up preferring their new gender, that should be okay too! People need to just get over it!