“Rave On” is the Page Turner series that asks feminist writers, artists, musicians, activists, leaders, and scholars to talk about a book that completely rocked their world. Today we feature FBomb founder and teenage feminist Julie Zeilinger on Full Frontal Feminism, by Jessica Valenti. Many books have shaped my feminist identity. Gloria Steinem’s Outrageous Acts and Everyday Rebellions really helped shape my feminist voice and helped me understand where the movement had been before my generation even existed. Other books, such as Listen Up: Voices from the Next Feminist Generation, showed me that youth has always been a part of feminism, recognized or not. But the book that really prompted me to begin my own feminist journey was Jessica Valenti’s Full Frontal Feminism: A Young Woman’s Guide to Why Feminism Matters. I read the book my freshman year in high school after I first told my amazing high school advisor—the kind and lovely Julia Griffin—that I was a feminist. At that point, I still wasn’t sure what to do with this self-discovery. As a freshman—the lowest of the low in high school politics—I was just looking for something to reassure me that I was on the right path. Ms. Griffin promptly handed over Full Frontal. What impacted me most about the book was its approachability. It spoke in a language I could understand and even thought was cool as a 14-year-old girl (swear words on most pages were a good sign). Full Frontal tackled serious feminist issues with a sense of humor and justified anger. The best part about the book was that I was able to pass it on to so-called “non-feminists” with just the sentiment, “Read this. You’ll thank me.” So many girls that would never have considered feminism before became Full Frontal Feminists—girls who were able to embrace feminism. They could speak up in class with confidence, and they knew exactly what to expect out of a teenage relationship. It’s ironic how people describe feminists as angry, because the way I see it—and did see it after passing around this book—is that feminism only makes girls happier with themselves. It was experiencing this phenomenon with Full Frontal Feminism that inspired me to start The FBomb, my community for teenage feminists. I have briefly contacted Jessica Valenti about my blog, but we’ve never spoken in depth. I would still love to, though. She has really pioneered feminist blogging, and I know I could learn a lot from her. Julie Zeilinger, 16, is the founder and editor of The FBomb, a feminist blog for teenagers who care about their rights as women and want to be heard. Related Rave On: Anne Elizabeth Moore on Dirty Plotte Rave On: Estelle Freedman on Against Our Will: Men, Women, and Rape Rave On: Jessica Hoffmann on Women, Race, and Class Rave On: Julia Serano on Daring to Be Bad: Radical Feminism in America, 1967-75 Rave On: Jennifer Baumgardner on The Girls Who Went Away

Well said, Julie. While I've always been a feminist, Full Frontal Feminism has probably had the biggest impact on my life and the lives of my friends, too-- after I read it, I passed it on to everyone I know and "converted" a significant number of my peers into self-proclaimed feminists.
Few other books can match this one for effectiveness and accessibility to teens.

And now I am thoroughly depressed.

Its great to hear there are young women out there that identify as feminists! And I have not read this book, but err...does the cover not bother anyone else? Sex sells, of course, but does it have to sell a book about feminism?

Jessica's friend Jill at Feministe does a good job of <a href="http://www.feministe.us/blog/archives/2007/05/16/full-frontal-feminism/"... together some of the criticisms</a> that got the most attention when FFF came out in this post where she defends Valenti against those same criticisms. I'm sure you can dig through the Feministing archives to read the many heated conversations about that cover. 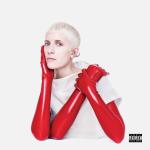 by Sarah Mirk
The unique band makes otherworldly, beat-driven pop songs about topics like internet privacy and the war on women.