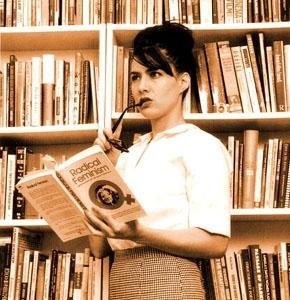 Musician, activist, and all-around cool lady Kathleen Hanna was interviewed by Laura Flanders for GRITtv last week. While the interview covered a range of topics (from endorsing Willie Mae Rock Camp's own Awkward Turtles to reflecting on the “arrogance of youth”), Hanna's most interesting comments regarded the complicated and sometimes problematic sides of building feminist leaders, archiving riot grrrl history, and comparing blogs to zines.

Hanna's appearance on GRITtv follows the recent donation of her zines and personal correspondence to NYU and also the creation of a Bikini Kill Archive website. With riot grrrl and 1990's nostalgia hitting a fever pitch lately (from books like Girl Power and the forthcoming Girls to the Front to websites like 90sWoman.com), it seems especially important for Hanna to not only pass along a history of her experience with riot grrrl, but also to provide a younger generation with an account of what the music scene was like before and during the riot grrrl movement.

It was pretty crazy back then. It's interesting when I meet women in their 20s now who…ask me what shows were like because they weren't there and I say “Oh, there was a lot of violence and it was this thing of constantly being told to take off our tops.” … I'm really amazed that some people don't even know that in the '90s that it was as bad as it was.

As Hanna emphasizes, not only were female musicians in short supply, but there was also a large amount of verbal and physical violence directed at the band members of Bikini Kill and many other groups. Considering how different this seems from today's music scene, it is almost too easy to look back at the last 15-20 years of music as a simple progression of trends rather than remembering them as an ongoing fight for and insistence on being heard as female musicians.

Hanna's interest in archiving her own personal history, as well as contributing to the history of riot grrrl, allows others to see firsthand the accessibility of the movement's zines and community-building efforts. In a way, this humanizes the riot grrrl movement by making the actions of people like Kathleen Hanna seem achievable and less shrouded by mystery and idolization (which seems like the most riot grrrl thing Hanna could do). Additionally, Hanna brings up the importance of carving out a space for zines at institutions like NYU, so that forms of communication and self-publication alternative to the internet can be given deserved recognition.

[The archive at NYU is going to include] flat copies of our zines, which is really important because it's going to show people in the future that everything was not made on the internet… The zines were supposed to be historical… The thing that I sometimes don't like about blogs or that doesn't suit me for that kind of work is that it can seem really ahistorical. 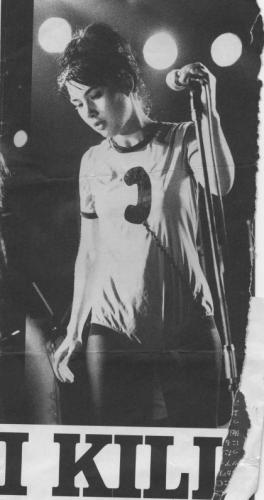 In Jezebel's take on the interview, Hanna was criticized for wanting more interesting feminist leaders and for claiming that we tear down our idols as quickly as we build them up. While Hanna did say that this tendency was “not just because we're women,” I don't agree with Jezebel that this comment was intended as a gender generalization. What Hanna seems to be saying is that as women and as feminists, we hold especially high expectations for the leaders who supposedly represent us (just as any underrepresented group would).

I'm so sick of the post-feminism thing. It is so ridiculous. I want more interesting leaders. I think the thing that is hard for feminist women who are interested in challenging all kinds of oppression is that we're freaked out about leadership, so that there's not more interesting leaders and a lot of times we kill off our leaders. Not just because we're women, but because we're in a culture [where] we create products and then we destroy those products. We lift people up…and then we're like, “they're not good enough.” I wish there were more feminist leaders to choose from and a larger variety.

Hanna brings up the very interesting, and rarely vocalized, idea that social and political movements seem to want to build a leader and project expectations that aren't based on their personal skills, but are instead based on the potential of what they could achieve or represent. Rather than setting up our leaders to fail, Hanna suggests that we could embrace their strengths and not expect them to be able to do everything perfectly. This seems to be what Hanna means when she states early on in the interview that she wants to be a three dimensional role model and be allowed to make mistakes. As feminists, perhaps we should allow our idols and leaders to be whole people and embrace the roles that allow for them to do what they are good at and what would ultimately lead to creating the most positive change. In that sense, I think Hanna would agree with Jezebel's suggestion that “maybe the problem has less to do with tearing down idols, but the very fact that we build them in the first place.” 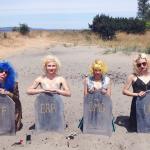