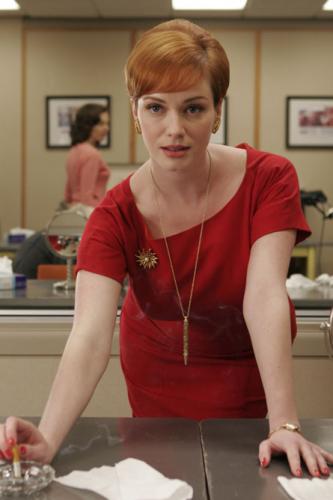 Sorry for so much Mad Men, but as my blogging stint approaches its end, I wanted to complete my little triad on the women of Mad Men - and I'm a little worried lately about Joan.

I'm worried because the last time we saw her she was no longer wearing that hairpiece and her walk was more tentative than usual.  I'm worried because she married that frat boy douchebag which everybody says is so 60s of her except, I don't know about you, I seem to know a lot of otherwise redeemable women who married fratboy douchebag.  (Some of them even had humanities degrees!)  Most of all, I'm worried because Mad Men has tucked her away into some kind of "lost causes" sock drawer in terms of both screen time and character development.

Now, let me be clear:  I have a difficult relationship with Joan, and more particularly with the way the show holds her up for us to fetishize.  She's sooooo curvy!  Look at her red hair!  She wiggles so elegantly!  I hate that the show uses her to do a lot of ass shots that, uprooted and placed in the context of a Gossip Girl or a Desperate Housewives, we would simply call gratuitous and let it be a day.  I hate that Mad Men gets a pass on them because Christina Hendricks is gorgeous.  I mean, she is gorgeous, but even though she is not a stick figure and there is value in having a woman like that be extremely sexual on the small screen, it still saddens me that she gets pigeonholed as the "bombshell" who is there for contrast with "plain" Peggy.  The show, in other words, more or less leers at her, all the time and unapologetically - much like Roger does!

That said, early on, I thought the show was going interesting places with Joan.  Betty is the pre-feminist Angel in the House; Peggy is the second-waver looking for absolution through professional success; and Joan?  Joan is all third wave, unapologetic sex and manipulation.  Early on, she was playing all the guys in the office, and most of all having a successfully cladestine affair with the boss, and Hendricks' natural coquettishness and syrupy voice made for an interesting contrast with the vixen they were making her out to be.  She was, in some ways, the original Bobbie, the one who had tapped into that "powerful business of being a woman" and managed to get what she wanted.

Two seasons later, though, we have a broken, unhappy married Joan, and I can't help but feel there's a whiff of punishment in it.  The show didn't bother to sell her doctor-husband to its audience; he appeared suddenly, no doubt found in a closet by some enterprising intern in central casting.  It is entirely unclear why Joan likes him at all; he does not appear to have Roger's cleverness at all.  One supposes that his being a doctor says to us that Joan is obssessed with social status, and yet, if she really were so, I cannot imagine her ever having slept with the boss.  Too much risk for too little reward.  Sure she had that line about finding a husband in the first season, but it sort of hung limply in the air then, much as her whole character arc is now.

No, I think Joan is far more interesting character than the writers seem to believe.  I don't think she's all T&A and silly status obsession.  I'm actually more of a Peggy myself, and the Joans of this world thus alternately mystify and infuriate me, but I think that to posit they are just headed for the same old flytrap of marriage and children seems a little harsh, a little unenlightened.  I sometimes wonder if the show is setting her up to be unhappy in order to orchestrate a reunion with Roger, but that too seems so sad for Joan, doesn't it?  Too ordinary.

Don't get me wrong - I am the kind of feminist who thinks all that stuff about the "powerful business of being a woman" is, indeed, a trap.  I find it suspicious when women's exercise of agency ends up in the same old patriarchal retreads - and the world's enthusiasm about Christina Hendricks' physical qualities certainly suggests that men are idolizing her as pinup, not person.  But i think there's a far richer story about the Joans of this world - and the worlds that preceded it - than "And then she got married, and lived unhappily ever after."  Don't you think?

I am hoping Joan will leave the doctor douchebag, as you so aptly named him. I don't see her reuniting with Roger, he seems to be happy with Jane (barf!). I think Joan cares about social status in the sense of marrying a handsome young doctor, as though that means something, but not simply about getting rich at whatever cost because she could have been Jane and she didn't want that. And we see in the episode where she entertains douchebag's boring colleagues and their wives that she thinks she and douchebag have a pretty nice place in the city whereas the wives encourage her to expect more, including expecting your douchebag rapist boyfriend to become the head of his medical department even though he obviously sucks at his job. Well, we see how that turns out. Do you think he is really going into psychology ??

My fantasy is that Joan leaves douchebag and becomes the head of television at Sterling Cooper. But I doubt this will happen. Joan is all about saving face, so I can't imagine that she would ever go back to Sterling Cooper and pretend that her dream of being settled was a mistake. Joan doesn't make mistakes. If she could, then maybe she would truly be Third Wave. Until then, she is just ahead of her time and trapped in it.

One important thing to remember is that the show isn't finished yet. They are setting all of their characters up for growth and development in future episodes and seasons, and I highly doubt that Joan, easily one of the most popular and dynamic characters on the show, will be excluded from this. I think you are limiting your interpretation of the female characters by putting them into neat little catogories and associating them with different feminisms. They do represent certain "kinds" of women, but the show paints them as people, not archetypes. That's key in a show like Mad Men; it means that everything feels a little uncomfortable and it makes us think. Joan isn't being "punished" by the writers of the show, but she is experiencing what was once a pretty standard life change and she doesn't like it. We as viewers don't like it either, so we take a closer look at the American Dream. It's a process.

I have to agree with Sarah M. I think you might be categorizing the female characters just a tad too much. And I think you have to realize that none of their stories are finished yet. We're only three or four episodes away from Season 3. And the series has already been renewed for Season 4. Their story isn't over yet. As for Joan's decision to marry Greg Harris . . . either she really loves the guy (which I personally doubt) or she was really desperate to attain the life of domestic bliss . . . something that she, Peggy and Betty are not suited for.

The article categorizes the women of MM based on the wave of feminism they seem to participate in, but these characters are not feminist archetypes or archetypes at all. They are individuals who respond to the world based on their personalities.

Joan is smart and in control, but she has accepted and internalized the limitations set for women born in that age. She *thinks* that she is manipulating the world to get what she wants, but she has never asked herself if she has looked at all her options or if there is another way to be happy. That's her tragedy. Joan aggressively went after what she wanted and got it without asking if that's what she actually wanted. People have to face the fact that this might be the end of Joan on the show. This might be the end of her story at Sterling Cooper.

Betty, it is interesting to note, is the same age as Joan, but she gave up her city-girl independence at 22, while Joan managed to hold on to her until she was 31. Betty never did the thing that people do and break away from their parents expectations. She basically went from daddy's house to college to Don's house. Her extreme "princess in the tower" passivity is her main problem. Betty is woman who perhaps even more than most women was taught that her value lay in her looks. She is obsessed with getting outside approval and she is not self-actualized, which gives her a child-like mien.

That brings us to Peggy, who was born in 1940 and is about ten years younger than Betty and Joan. Through a mix of ambition, smarts and luck, Peggy has a career. This, unfortunately, makes her a bit of a duck-billed platypus---the unquantifiable thing that belongs nowhere. Yet. She's young, and she's still figuring out where she belongs and how to manage being an ad man and a woman. I doubt that Peggy will ever "have it all." I don't see many many men with the balls to take her on as a husband, and I don't see Peggy giving up her career to act as an accesory to a man. She might get married to some hard-driving cosmopolitan guy, but I don't see Peggy with kids.

All of these charcters need to be seen as individual in a drama, not archetypal women or reflections of the audience's yearning. They are who they are, and their stories may not necessarily end the way we'd want them to.

It's interesting on how many fans want to label Betty as a child, while ignore the possibility that other characters - including Peggy AND JOAN - are also childish. Look at Joan's reaction to Paul's romance with Sheila White. It was racist . . . and childish. Fans were so obssessed with making excuses for her actions, claiming that she was trying to point out Paul's pretentiousness. NO ONE bothered to wonder why Joan even bothered. She obviously had a low opinion of Sheila, treating the latter in a polite, yet condescending manner. And in her argument with Paul, she called Sheila a check-out clerk, despite the fact that Sheila told her that she was a store manager. Her reaction to Sheila White was Joan at her most childish.

Even worse, she is just as obssessed with maintaining an image as much as characters like Don or Betty. Yet, fans managed to conveniently forget this. Hmm. Methinks a lot of MAD MEN fans are inclined to put Joan on a pedestal.

I'm still wondering why she had married Greg Harris.