If your sexual education was anything like mine, every few years you and your peers were rallied into crowded classrooms, separated by gender, and were schooled on the happenings of your body. By the time you were in high school, you may have been fortunate enough to receive some vague and heteronormative information about STIs and how abstinence is the best (and only) form of birth control. Problematic? Yeah.

Saiya Miller and Liza Bley thought so, too, and compiled a collection of comics over the course of five years to educate others on sexuality in a far more inclusive and honest manner. The comics and stories are frank and real, free of the sugar coating that pervades the typical two-day sexual education courses rampant in U.S. public schools.

Not your Mother’s Meatloaf: A Sex Education Comic Book (Soft Skull Press) explores topics from cross-dressing to kinks to consent, and offers the experiences of an impressively varied group of comic artists such as queer-identified folks, people of color, and comics by teens themselves. As the title suggests, the book is far from dry and tired, and is instead a terrific approach to sex ed. It pairs narratives from Miller and Bley with subsequent comics, grouped together by theme, producing seven chapters in total. All of the comics are amazing and intimate with varied styles and unique tales. It feels as though you’re reading through the diary of a close friend at times. Even when the stories told aren’t initially relatable, their honesty allows them to be understood across the board.

Here are clips of three different comics from the book, to give you a feel for the diversity of styles. Read them here in full. The book epitomizes DIY, as the materials were submitted from all walks of life – many of the authors are young and don’t come from academic backgrounds in art or sexual education. Several of the comics are difficult to even read at times as a result of the loose requirements, but this unpredictability is what makes the book exciting and allows for such rare honesty to be presented, no matter how explicit.  Whether the comics deal with the first time they cross-dressed or recount sexual abuse that the author experienced from a health care provider, nothing is off limits. Some difficulty comes, however, when the target audience and focus of the comic is unclear, causing the book’s otherwise-wonderful roughness to miss its potential reach.

One of the biggest questions that I had after reading Not your Mother’s Meatloaf was what age the book was intended for. On the one hand, truthful accounts of one’s sexual experiences and mishaps are valuable at any age, but on the other hand the lack of discussion surrounding the dangers of said mishaps are troublesome. One particular comic talked rather smugly about turning tricks in a stranger’s apartment using Craigslist and many of the comics talked about unhealthy, abusive relationships. While the medium may allow little room for full-blown analysis, a postscript from the editors about the dangers of soliciting sex online or some sort of overview of what healthy relationships can look like would be beneficial to all, and mandatory if the book is meant to present the subjects to young teens. For a book that is geared towards youth, the omission of even one comic about statutory rape, the prevention of STIs, or different kinds of birth control methods was truly surprising.

However, despite its downfalls, the book is ultimately a wonderful supplement to what someone may be learning (or have learned) in school. While it may assume too much knowledge of the reader to be appropriate for younger audiences, for a student nearing or entering college, it is perfect and empowering. It doesn’t use bullshit scare tactics to unsuccessfully steer youth towards abstinence and it also doesn’t assume that everyone is cis or hetero or thin or white. A few standouts include the comic “Gray Sex” which the very real existence of sexuality in ‘old’ age, “Barenaked Ladies” which celebrates the diversity of women’s bodies, and “Street Luck” which talks about two street boys who found love on a rooftop for one night. At the heart of every comic and the collection as whole is the idea that sexuality is never black and white and our experiences will always be unique. Not your Mother’s Meatloaf is a very refreshing attempt at helping us navigate those experiences so that we can form our own healthy outlooks on a shamefully stifled but central part of all beings. And that is beautiful.

You can read several comics from Not Your Mother’s Meatloaf here—and catch up with the editors on tour! 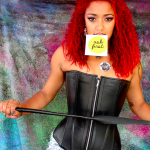