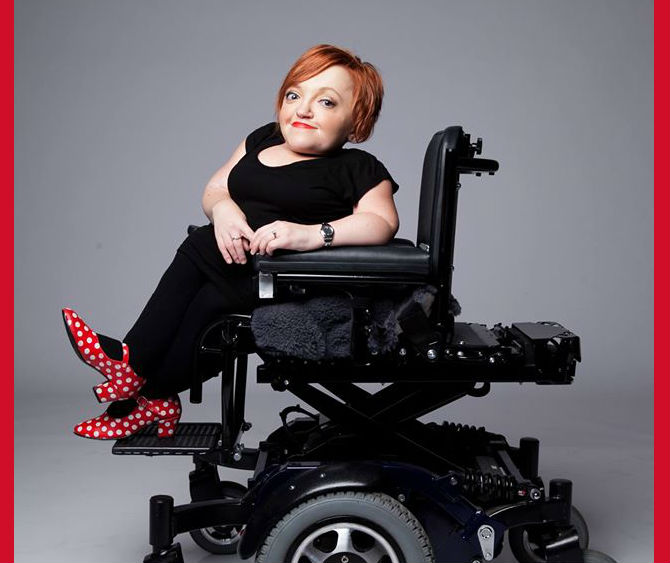 Australian comedian and disability rights activist Stella J. Young passed away last weekend at the age of 32. Her presence in the disability community will be sorely missed. The fact that she has not been more widely eulogized is a compelling testimony of the social value placed upon disabled people.

Despite Young’s tremendous contributions to women’s rights, few feminist sites have acknowledged her passing, and a limited number of mainstream news sites noted her death, save for a commentary in The Guardian from Graeme Innes.

Born with osteogenesis imperfecta (“brittle bone disease”—or, as Stella preferred to say, “dodgy bones”), Young wasn’t given a good prognosis at birth. Her parents were warned that her fragile bones would expose her to extensive health risks.  Young later challenged that warning when she noted that the biggest risk for people with her condition was the chance that they might develop diminished lung capacity, which could cause complications from respiratory infections (notably, Young died of an aneurysm, which was likely not related to her condition). As is common for people with dodgy bones, Young experienced a number of fractures, some severe, which caused her to have a shortened stature, and she began using a wheelchair for mobility.

”My parents didn’t know what to do with me so they just pretended I was normal and that worked out quite well for me,” she said in a 2011 interview. Support from her parents was a contributor to her sense of independence and belonging growing up, in a marked departure from the way many disabled children are treated by their families. This undoubtedly played a key role in her outspoken, assertive nature, along with her lack of interest in being patronized. As she grew older, Young noted that her reaction to offensive comments was more amused than insulted. She especially loved interacting with children and getting an opportunity to demystify disability to raise a new generation of children who would grow up without fearing disabled people.

By the age of 13, Young was a budding disability rights activist. As a teen, she realized that she was surrounded by an ableist world and she wanted to start fighting it. She was introduced to the social model of disability and reclamatory language, and began identifying as a disabled person and a crip, arguing that her disability was a part of her identity and culture. At 14, she traveled her neighborhood to assess its accessibility, in a move that presaged her lifelong advocacy for accessibility at theatres, restaurants, and other public venues. Young fiercely believed that disabled people should have full access and equal rights in society. Throughout her life, she was a compelling writer who discussed a broad variety of subjects, including ableist “right to die” legislation, inspiration porn, and forcible sterilization of disabled people. As the editor of Australian Broadcasting Corporation’s disability-centric new site Ramp Up, she also contributed to the larger community of commentators and authorities on disability rights and culture.

Her sharp writing wasn’t the only advocacy she performed. Young also worked directly with politicians, community leaders, and other policymakers to push for equality not just for disabled people, but for women; and she noted that the intersection of injustice for disabled women was particularly acute. In a letter written to her imaginary 80-year-old self, she said:

“I stopped unconsciously apologizing for taking up space. I’m sure you can scarcely imagine that now; a world where disabled people, women in particular, are made to feel like we’re not really entitled to inhabit public spaces.”

Her comment rings true to the experiences women face today, and how true equality can’t happen without equal freedom to move about in society. In the years prior to her death, one issue of particular concern for her was cuts to Australia’s disability allowance and welfare system. She was especially outspoken on these issues, encouraging the nation to consider social supports as a form of investment in the disability community.

Young also used her humor to skewer social attitudes about disability. In her always entertaining, often profane, sharp commentary, she kept audiences laughing and held the “tactfully challenged” up to a unique lens.

In her letter to 80-year-old self, Young referenced an iconic poem by the late Laura Hershey, another beloved and critical disability rights advocate. “You Get Proud By Practicing” has become, in a sense, an anthem for the disability rights community, much like Paul K. Longmore’s essay “Why I Burned My Book.” Both, along with the work of Stella J. Young, reference the shifts in society and culture when it comes to disability, and how far society needs to travel in order to reach true equality. The poem reads:

You do not need
A better body, a purer spirit, or a Ph.D.
To be proud.
You do not need
A lot of money, a handsome boyfriend, or a nice car.
You do not need
To be able to walk, or see, or hear,
Or use big, complicated words,
Or do any of those things that you just can’t do
To be proud. A caseworker
Cannot make you proud,
Or a doctor.
You only need more practice.
You get proud by practicing.

Young’s family has asked that those interested in making contributions in her name do so to Domestic Violence Victoria. For people outside Australia who may be interested in commemorating her passing, a contribution to a local rape crisis center or domestic violence advocacy group would be equally appropriate.

Commemorations doesn’t have to be financial, either. In memory of Stella Yung, conduct accessibility audits in your own community, challenge local officials on their disability policy, strike out against ableism wherever you see it, and, in your advocacy for women’s rights, don’t forget that some women are also disabled.

s.e. smith is a writer, editor, and agitator from Northern California. smith serves as the Deputy Opinion Editor for The Daily Dot, and Social Justice Editor for xoJane. Photo of Stella Young from her Facebook.

Thanks for this piece - it's great to see Stella's work recognised in the international media. What a woman, gone far too soon.