Remembering Writer Doris Lessing: “Whatever You're Meant to Do, Do it Now.” | Bitch Media

Remembering Writer Doris Lessing: “Whatever You're Meant to Do, Do it Now.” On Sunday, November 17th, the British author Doris Lessing died in her home in London at age 94. Lessing’s writing and life were exemplary—she held herself and society to a high standard—and if you were searching for a woman writer who might serve as a role model, you certainly could do much worse.

Lessing was a writer who refused to let others define her, and insisted (much earlier than most) that women’s inequality was part of a larger, all-encompassing problem of inequality in the world. She is one of only 13 women who have ever received the Nobel Prize for literature.

Growing up in Zimbabwe, the British colony known at that time as Southern Rhodesia, Lessing watched her parents succumb to contrasting obsessions: her father struggled to scratch a living out of his hundreds of acres of bush while inside their mud house her mother, a once-promising pianist, tried to create the kind of home they might have had in London. Going off to work at fifteen, and marrying at eighteen, by her early twenties Lessing had two young children and seemed poised to recreate the unhappy domestic pattern of her parents. Instead, she left. First she left her first husband and two young children, then she left her second husband, and finally she left Africa, with her third child in tow. “Whatever you’re meant to do, do it now,” she said.  “The conditions are always impossible.”

In an article titled “Lowering the Bar: When Bad Mothers Give Us Hope,” Newsweek quoted Lessing as saying “For a long time I felt I had done a very brave thing. There is nothing more boring for an intelligent woman than to spend endless amounts of time with small children. I felt I wasn’t the best person to bring them up. I would have ended up an alcoholic or a frustrated intellectual like my mother.” Such a nuanced remark about her decision implies a private regret without capitulating to a nosey public hungry for apologies from women about their personal choices. She was unwilling to stay in a role that did not fit, nor would she contort herself into the posture expected of her afterward.

In the same way, she shed political definitions that felt constricting, first distancing herself from the kind of communism that accepted Stalin, and later excusing herself from the kind of feminism that excluded men from the feminist project.  Indeed, in her first novel, The Grass Is Singing, published in 1950, the oppression of women is one function of a larger mechanism that oppresses the poor, the colonized, and the colonizer.

An inveterate reader, Lessing structured her novels with careful precision. The Grass Is Singing is almost Greek in the austerity of its construction, and The Golden Notebook’s innovative organization served the plot of the novel so well that at first most critics failed to notice it. Perhaps her most well-known novel, The Golden Notebook is one of those (still all-too-rare) books, like Mary McCarthy’s The Group, that is artistically ambitious and chronicles the lives of women grappling with important political and aesthetic ideas, raising children, working different kinds of jobs, maintaining meaningful friendships with men and with each other, and living through times of social upheaval. The Golden Notebook conveys what may have been Lessing’s uncompromising ethos: “What’s terrible is to pretend that second-rate is first-rate. To pretend that you don’t need love when you do; or you like your work when you know quite well you’re capable of better.” As an author, too, Lessing refused to stick to just one category, and there has been speculation that the Swedish Academy remained ambivalent about her for so long (she was the oldest person to be awarded the Nobel Prize) because she wasn’t content with literary fiction alone, she also ventured into the realm of science fiction. Octavia Butler considered her an important influence. In a 1979 review in the New Republic, Ursula K. Le Guin’s assessment of Lessing’s Shikasta was more critical, but in the end she conceded that, “this lurching, lumbering, struggling book is redeemed, is worth reading, is immortal diamond.”

Ultimately, Lessing’s legacy lies in her willingness to examine what seemed wrong to her, in her life, in her world, and in her work, and her willingness to act on those observations. She was a steadfast opponent of apartheid and lifelong champion of literacy. Her Nobel Prize speech, “On Not Winning the Nobel Prize,” locates the future of literature in the hands of those that geography and poverty have made unlikely to win any prizes. And yet, she tempered her unflinching critique of society with compassion for the individual. Some authors seem to punish their characters for their faults, but Lessing didn’t.  Instead, she wrote honestly about the human condition, creating characters who suffer, and inflict suffering on others, in spite of their virtues.

Relevant: The History of Manless Climbing 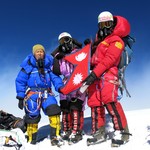 by Vivian Underhill
What does true gender equality look like in the climbing world?