I have yet to read Tim Wise's White Like Me: Reflections on Race from a Privileged Son (Soft Skull Press) or Affirmative Action: Racial Preference in Black and White (Routledge), but have heard tons of praise for his work. So I was excited for his appearance at the First Unitarian Church of Oakland earlier this month, an event sponsored by Speak Out!. I was a little wary when he took the mic and started speaking; his manner initially conjured up memories of some egotistical, "Check me out, I'm one of those aware white folks—I'm down!" types I've run into. But he ended up being sharp, funny, and—most important—aware of his role as an ally rather than a leader in the antiracist movement, acknowledging that the majority of his sources for information about race have been people of color. He was loud, but in a good way—not arrogant-bratty-white-boy loud.

Apropos of the current electoral race, Wise focused quite a bit on Barack Obama and the idea of transcendence. Along with questioning the ludicrous idea that Obama is supposed to "transcend" his race (are white people expected to "transcend" their race?), Wise pointed out that people who were claiming Obama's position as proof that our society had collectively "transcended the race issue" were the same people who flipped out when news of the senator's connection to Jeremiah Wright came to light. Because there's nothing more frightening to liberal white folks than an angry black man (or, gasp, woman) speaking the truth about racism.

And speaking of women, I do think it's necessary to point out that while Wise effectively and intricately connected racial injustice and class struggle (most notably pointing to the creation of whiteness as a unifying identity, precluding one's class or social situation), he could have explored more deeply the ways in which gender inequity is intertwined with race. He briefly mentioned patriarchy towards the end—an inclusion I'd been waiting for hopefully—but I wanted more. At least it's heartening that he's not among the numerous antiracist dudes oblivious to their male privilege (Seriously, is there a workshop for antiracist men brainwashed by patriarchy and privilege-blind white feminists to get together and point out each others' obliviousness?).

Check out some of Wise's essays or find out if he's speaking near you on his Speak Out! page.

Frankly speaking I love this guy! He's an awesome talker loaded with firm facts and arguments. It seems to me he's an independent and honest truth-teller. And most of all his works I was impressed by the essay "All kids are white". The only thing I can't understand what's up with his attitude to the "white liberal feminism" ?

Relevant: Talking to Your Kids About Trump 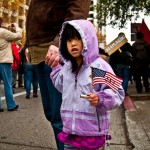