The female condom. No one talks about it, no one uses it - it’s just one of that group of contraceptives, which includes the sponge and the diaphragm, that everyone sees as outdated and useless. Hormonal contraceptives are considered the high-tech, modern method of birth control and they dominate the market. But lately the male condom had been taking back its share of the conversation – the New York health department launched a new design for the condoms they distribute, Lady GaGa is pushing her own brand and President Obama has not only overturned the condom-hating actions of the last administration but put millions of dollars into research on men’s attitudes towards them – and all this is paving the way for the female version to make a comeback.

In Chicago there’s a Female Condom Campaign underway. The slogan is ‘Put A Ring On It’ – a reference to the two rings, inner and outer, that are part of the female condom - one of which unfolds outside of the vagina – and of course the Beyoncé song. The Chicago Women’s AIDS Project worked with the FDA to make improvements and launch a new version (FC2 as it’s known) which is formed from a different material, making for a better experience and a lower price than that of the original condom, released 15 years back. A thousand women have been trained in how to use this method and then sent out to train others across the city.

The female condom prevents the transmission of STIs and HIV, but there’s another message in the campaign – that it can also enhance women’s enjoyment of sex, with one member of the Chicago Women’s AIDS Project calling the double rings ‘amazingly pleasurable.’ The ‘Put A Ring On It’ site explains further: ‘The two rings double the pleasure. For vaginal sex, the outer ring stimulates the clitoris and the inner ring can be bumped with the tip of the penis.’ This makes a marked difference to what is often said about the effect of the male condom on enjoyment. Female condoms even adjust to body temperature, and so provide a more ‘natural’ feel. Plus the material is hypo-allergenic. The emphasis of the campaign is on women’s experience, but the benefits for men are implicit.

FC2s are not available in drugstores as yet - barely any stock the original kind. The Female Condom Campaign suggests we all go out there and ask until they’re on the shelves right next to the Trojans.

This is a wonderful product, but some people really should not be allowed near After Affects. That's a terrible video and it worries me that the poor quality of it will put some people off watching it and thus being exposed to the important information it contains. 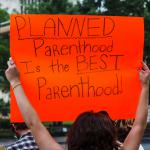 by Sarah Mirk
Today in delicious irony, an investigation clears Planned Parenthood of wrongdoing and indicts two extremists instead.