And now for something with a bit more gravity than usual here on RetroPop: Punk and Real World Politics and Prison and the Queen of Pop.

Pussy Riot finds out in the next few days if the influence of the fairy godmother of pop music, Madonna, has helped save their political punky selves.

The Russian trio, which has been charged with “hooliganism,” has been languishing in the clink for five months after giving “an impromptu performance in Moscow’s main cathedral to call for an end to Vladimir Putin’s rule.”

Pussy Riot was tried and has continued to fight for their rights to expression in court, with one of the members even addressing prosecutors by saying, “We have more freedom than all those people from the prosecution in front of me, because we can say what we want.”

Activists around the world are said to be planning protests in support of Pussy Riot for August 17, the day on which the judge is set to deliver her verdict. And another one of their supporters is none other than Madge herself: the lady bared her back, adorned with a message of support for the band, wore the group’s signature balaclava during her performance in Moscow, and spoke openly on the topic.

Here’s hoping that Pussy Riot’s judge is a fan of MDNA. And freedom of expression.

But today, in light of Madonna standing up for our punk sisters, let’s RetroPop with a political spin, and take a look at a piece of work from the late American poet, Adrienne Rich. I thought her poem, “What Kind of Times Are These” was a particularly fitting work. [You’ll have to click on that link to see the entire thing, for rights reasons, I can only bloop up a few excerpts for analysis.]

For starters, in it Rich offers an amazing image for contemplation of dissent:

The narrator goes on to reveal that this is not a Russian poem, but rather is set somewhere more familiar, “our country moving closer to its own truth and dread,/ its own ways of making people disappear.”

The threads of oppression and dangerous secrets in America, in “familiar places” more symbolically, and the reference to Russia specifically all offer an interesting lens through which to view this most recent Pussy Riot event and Madonna’s reaction to it.

Obviously this topic is far more fraught than the issues I usually discuss in RetroPop, so I’m not going to make some fun and silly connection between the music of Madonna, Pussy Riot, and the poetry of Adrienne Rich for you today. I will offer that in Madonna’s latest single, “Turn Up The Radio,” the lyrics demand that we “Gotta shake up the system and break all the rules.” (Even in her less/not overtly revolutionary tunes, there’s always one or two generically political moments.)

There are many other interesting themes and layers of affirmation, fear, commitment, and dissent that run through the work of Rich, Madge, and Pussy Riot. But to avoid putting my foot in my mouth or disrespecting anyone involved in this very serious and real situation, I’m just going to put these three art items in front of you and let you make your own connections. Discussion in the comments section is highly encouraged.

… just remember, next time you hear it on the radio, that it’s coming to you from the same woman who can preach to the crowd about this: 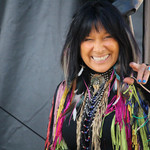 by Katie Presley
Decolonize your playlist.