RetroPop: Is the Dude in P!nk's "Blow Me (One Last Kiss)" Just a 2012 Version of Heathcliff from Wuthering Heights? | Bitch Media

RetroPop: Is the Dude in P!nk's “Blow Me (One Last Kiss)” Just a 2012 Version of Heathcliff from Wuthering Heights? Welcome again to RetroPop, where we mash up lady-driven Top 40 tunes with the work of great female artists from history and explore what they have in common, maybe elevate some readers’ respect for Billboard hits, and revel in some great women writers in the process. Your reactions, disagreements, and playlist suggestions are welcome and encouraged. So let’s jack the volume to 11 and get down with some Gothic romance!

Today we’ll be taking a look at/listen to similarities between the cultural outputs of P!nk and Emily Brontë. Obviously, right?

First let’s get you up to speed on the products we’ll be smashing together. Below is the video for P!nk’s “Blow Me (One Last Kiss),” a title which never ceases to amuse me.

Peruse the lyrics for “Blow Me (One Last Kiss)” here.

And behind door number two is Emily Brontë’s Gothic masterpiece, Wuthering Heights. Of course, you could do yourself a favor and read the book in its entirety, but perhaps you prefer a refresher from some video or another. Right. Got it.

So with P!nk’s tune, we’re listening in on her farewell to a longtime lover who’s given her a whole lotta grief: burning tears, fighting, lies, headaches, mutual shit days, and what seems to be a chronic case of whiskey dick. She runs through all the problems he’s caused for her, how it’s broken her down emotionally, and then she gives him what sounds (musically) like a kiss off with perhaps a small twinge of nostalgia but what looks (lyrically) like a real eff-you.

Makes me want to pump my fist and run faster on the treadmill; excellent fodder for the go-girl kind of song for which P!nk is known. But, today I argue “Blow Me” is also an assessment of the Byronic Hero, as famously exemplified and critiqued in Wuthering Heights’ character of Heathcliff.

Wikipedia reminds us that Lord Byron originally made famous this specific type of tortured leading man in his work, as in The Corsair, from 1814:

He knew himself a villain—but he deem’d
The rest no better than the thing he seem’d;
And scorn’d the best as hypocrites who hid
Those deeds the bolder spirit plainly did.
He knew himself detested, but he knew
The hearts that loath’d him, crouch’d and dreaded too.
Lone, wild, and strange, he stood alike exempt
From all affection and from all contempt: (I, XII)

Such a hedonistic, dangerously passionate and perpetually discontent hero is what Emily famously raises up and evaluates through the tousled Heathcliff, on whom the entire plot of Wuthering Heights turns. It’s also what’s made the many adaptations of WH so sexy. Apparently lots of women are drawn to this kind of messy, tormented romantic kind of fellow or something. (*Suddenly, Brianna understands the appeal of Twilight*)

Of course, there are approximately eight zillion potential PhD dissertations exploring the cultivation and motivations of conflicted old Heathcliff: issues of his inferior social class within the WH ecosystem, discussions of nature/nurture in developing his destructive tendencies, psychoanalytic stuff all over the place.

But in a very basic Coles Notes kind of way, I’m going to acknowledge how it is Heathcliff’s tendency to indulge so extremely in feelings and desires that leads to pain and destruction of others (including, arguably, the one he loves) and the continued dramatic tensions twisting through generations at Wuthering Heights. With Heathcliff, logic and reason do not prevail, all is torture and love and torture again. His is a destructive force with long-lasting repercussions, despite our slight sympathy for the crimes committed against him.

Thus, Wuthering Heights presents a hero whose transgressions and shortcomings we understand, but are not encouraged to absolve.

Was Brontë essentially saying, “Hey, tortured hero, you’re compelling but caustic… I think I’ve had enough of this/ Blow me one last kiss”?

And is P!nk showing us through the lyrics of her tune what a modern lady might say and do to a messy man like Heathcliff?

Either way, both Brontë and P!nk offer ruminations on the heights and depths of giving oneself over to a Byronic Hero. It’s just that one is easier to do the Electric Slide along to. (Wuthering Heights!) 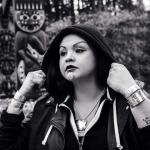