Howdy there, people with an interest in female-performed pop music and great women writers of the past! Here we are in the midst of another edition of RetroPop, the guest blog in which I smash one of each of the aforementioned types of cultural items together for fun and insight and general merriment.

Today I am under the weather with a bit of a cold. What can you do (other than sulk and drink lots of tea)? It’s the change in seasons, I suppose. And I love fall so I’m not going to go blaming him/her for my illness. But I will sniffily complain that the cold has made it hard to work. *B pouts.* It just makes me want to snuggle beneath a blanket and be surrounded with soothing, positive waves of pink and blue-tinged pop musics about happiness and a life free of cares. How lucky, then, that I get to write a RetroPop! I believe that the combo of Carly Rae Jepsen and Owl City is the prescription for my woes.

You may remember that I kicked off this series with CRJ when I mooshed her song of the summer up against Pride & Prejudice. I don’t know how you feel about it, but that experience was pretty darn fabulous for me, and so when I watched another of her tunes creeping up the Billboard charts I licked my lips in anticipation of a tasty CRJ dish.

Now, I noticed today that Jepsen released a new tune called “This Kiss” and honestly I’ve only heard it a few times and I’m not sure what to think about it yet, so let’s hold out on that one for a few days when we go for our CRJ hat trick… but in the meantime, I’d like to discuss her gooshily great and dangerously catchy duet with electro-alterna-dude Owl City, “Good Time,” lyrics here.

For those not so interested in the line-by-line analysis, I’ll just say they tell the tale of a party-lovin’ guy and girl who frequently sleep until twilight only to stumble out of their hotel rooms, dropping phones in pools, raising their hands up in the air with giddy jubilance at going to many fun parties and emitting plenty of I’m-lovin’-life “whoah-oh”s.

Jepsen’s share of the lyrics, specifically, paint a picture of a scenester lady who knows how to have… uh… a good time. It makes me think of another famous good-time-enjoying party girl from times past who has since taken on the mantle of feminist icon: Zelda Fitzgerald.

It seems contradictory to introduce Zelda as a feminist icon and then tell you that she was the wife of F. Scott Fitzgerald, but, hey, that’s how everybody knows her. Such as, most recently, when she made a cultural reappearance in Woody Allen’s Midnight in Paris as FSF’s wife. What wasn’t developed in the film, and what isn’t widely known about her, is that Zelda was a writer and artists in her own right.

Fitzgerald was a ballet dancer, painter and writer and novelist (or memoirist, depending on your interpretation of the content of her books) in addition to being F. Scott’s wife (Wow, right?!). She had a reputation for embodying the spirit of youth and energy of the flapper lifestyle—fun-time go-go party girls who probably would have had a “Good Time” whiling the night away with the likes of Carly Rae Jepsen and Owl City.

But life wasn’t all feather boas and Charleston dancing for Zelda. Quite apart from the struggles she bore throughout her tumultuous marriage to F. Scott, she also had Schizophrenia and was hospitalized for complications resulting from it several times; in fact she died during a hospitalization when a fire broke out in the building.

Despite maintaining this reputation as a Flapper bon vivant, Zelda wrote of dark realizations in her (not-so-secretly autobiographical) novel, Save Me The Waltz, which described the deterioration of the party girl lifestyle for which she was known, as well as the demise of her artistic ambitions and hopes for a successful marriage.

At the time, Save Me the Waltz was criticized as being poorly written by her husband and others. F. Scott specifically was not only unimpressed with the literary qualities (at first, he later changed his tune…) but also pissed that she had aired their dirty laundry under such thinly veiled pretenses.

In 1970, Nancy Milford altered the dismissive public opinion of Zelda with her Pulitzer-Prize-nominated biography of the author/dancer/bon vivant, identifying her as a legitimate artist worthy of respect (upon its publication is when Wikipedia says ZF was taken up as a feminist icon). I’m not sure of the specifics of that book, as I haven’t read it, but what I do know is that to me, Zelda’s novel represents the harsh light of dawn for a good-time gal on literal and symbolic levels.

In a piece for Metropolitan magazine, Zelda wrote specifically of the demise of the flapper lifestyle:

The Flapper awoke from her lethargy of sub-deb-ism, bobbed her hair, put on her choicest pair of earrings and a great deal of audacity and rouge and went into the battle. She flirted because it was fun to flirt and wore a one-piece bathing suit because she had a good figure … she was conscious that the things she did were the things she had always wanted to do. Mothers disapproved of their sons taking the Flapper to dances, to teas, to swim and most of all to heart.

But, tellingly, the piece was called “Eulogy on the Flapper.” Because, of course, all parties come to an end, even if you’ve had a “Good Time.”

So what do you imagine Carly Rae Jepsen and Owl City might be eulogizing a few years from now in another infectious pop ditty? I’m hoping it’s those jean cut-off short-shorts, but I’m open to other suggestions…

Previously: RetroPop: On the Manhunt with Rihanna’s “Where Have You Been” and Agatha Christie’s Miss Marple; RetroPop: Nicki Minaj’s Obama-Noted Political Satire and the “Little Boxes” She Might Enjoy 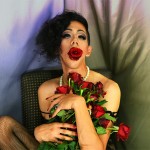 by Anhelo Escalante
In a dangerous time for folks who don’t conform to the norms of the heteropatriarchy, Mou bravely walks onstage as proof that both gender transgression and resistance are more relevant than the fear and hate of the outside world.