Revenge of the Feminerd: Bluestockings, the Original Feminerds | Bitch Media 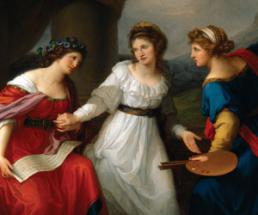 After writing my intro post for this column, Facebook commenter Jen mentioned the bluestockings and I thought it would be a great idea to dedicate a post to them: the original English feminerds.

The term bluestockings really caught hold when Elizabeth Montagu and Elizabeth Vesey founded the Blue Stockings Society in London in the 1750s as an informal social and educational group open to both men and women, modeled on the salons that had become popular in France. Blue stockings were cheap, in contrast to the bleached or expensively dyed stockings worn by upper classes, and there’s speculation that the group got its name for allowing in a philosopher who showed up in his cheap blue stockings (that’s right: the first bluestocking was a man).

Of course, there were women scholars around the world who were renowned for their intellect long before this, but bluestockings were seen as members of a group defined by their gender (although the term originally included men) and intellectual interests. They also dealt with a societal stigma that implied they were frumpy, uncivil (thus unfeminine by standards of the day), and doomed to fall short of male intellectual achievement. For these reasons, they’re probably the closest historical group we have to today’s feminist nerds, who obviously face less stigma but see themselves as part of a larger group of nerds and who challenge the idea that intellect is a male terrain. 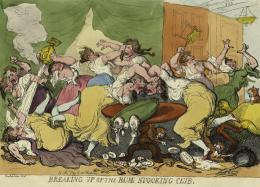 Bluestockings began to face ridicule as the gatherings of the society became more popular, and the term started to be used more generally as a pejorative to describe women pursuing higher education and intellectual advancement. The caricature above was drawn by Thomas Rowlandson and shows the negative view of bluestockings that began to proliferate. Being a bluestocking was seen to be antithetical to being a woman, since women seeking out intellectual pursuits was seen as unnatural.

But despite the stigma, the bluestockings (and similar groups on the continent) had a big impact on European society. In her book, Bluestockings: The First Women to Fight for an Education, Jane Robinson looks at the role Bluestockings played in the fight to get women access to post-secondary education. They had an uphill battle, facing conventional wisdom such as the idea that men’s brains were larger than women’s and therefore women were less able to learn.

Robinson cites one particular instance when a Cambridge professor in the early days of women’s admission to university, on finding only women in his class, declared: “As there is nobody here, I shall not lecture today.”

The tensions that were present among bluestockings are also reflective of some of the tensions we experience in feminisms today.

Although the bluestockings let in the poorer philosophers, theirs was largely not a working class movement. Like the first wave feminists who fought for women’s suffrage, they rarely took on the rights of poor women or women of color, although there is evidence that some of the bluestockings were anti-colonialists.

Further, there were tensions between men and women bluestockings, with some concern that the men who were championing women’s rights were doing so merely to advance their own Enlightenment political agenda (See Arianne Chernock’s Men and the Making of Modern British Feminism).

There was also conflict over striving to recognize the achievements of women as women. In addition to making the group a greater target for critique, it’s similar to a strategy of the suffragettes in trying to argue women’s rights by arguing women’s greater virtue and her essential role as a wife and mother. For example, Mary Wollstonecraft’s A Vindication of the Rights of Woman makes the case that women need greater education in order to discourage their vanity and to make them better teachers of their children and companions to their husbands.

The baton has passed many times from then until now but it’s not hard to see similar arguments taking place in feminism today: there’s still debate over the role of men in the movement, fights over exclusion based on class and race (and now sexual orientation and gender identification), and arguments about whether elevating women’s status as mothers is a positive or negative strategy.

There’s still work to be done before we get true educational equality for women of all races, sexual orientations, and gender identities in the West and around the world, but the bluestockings helped lay the groundwork for white, middle-class cis-women at least, to pursue study and intellectual achievement with fewer barriers and less stigma.

looking forward to more feminerd posts. this one is great :)

'....the first wave feminists who fought for women’s suffrage... rarely took on the rights of poor women'

In the UK this is a myth - I don't know about in the USA. The leaders of the suffragettes were usually middle or upper class because these women could afford to be arrested, socially and financially. Actually, a significant number of working-class women were involved, but they were unable to take part in some of the daring stunts the more privileged suffragettes organised, since this would literally have destroyed their lives. A lot of the younger suffragettes also turned to the fight for votes after having done charity work - encouraged as a feminine pursuit at the time - and come across such delights as raped little girls, spousal abuse or families living in squalor in some London or Manchester slum. It was obvious that the women thrown into these appalling situations would be less likely to be there if they could speak politically for themselves.

Every time that someone cites the supposed blindness of the suffragette movement to the rights of the poor, they are also forgetting the former mill girl Annie Kenney, the possible one-time lover of Christabel Pankhurst according to some historians. Her involvement in the movement was not an insignificant one, but her background was typically deprived for a woman who'd been a mill worker.

Thanks for pointing that out, Garlic. I'm sure there were divides among the suffragettes just like we have among feminists today. I didn't know about Annie Kenney so will definitely check it out to learn more about her and you make a good point about some of the working-class women being unable to participate in the strategies.

I wish the administrators of my university would read this. They seem to have forgotten the activist struggle involved in creating programs that deal with marginalized groups and are absorbing interdisciplinary programs (Women's Studies, LGBT Studies, Latin American Studies, etc.) into departments so that they are no longer autonomous. Shouldn't there be more progress and not regressive changes? The "Diversity University" (as Temple likes to be called) could use a lesson from the bluestockings. Education is important for everyone and breaking down barriers should be a priority!

I enjoyed your historical post. I have recently posted an article on my blog about Boadicea, the the first-century Icenic tribal queen and nemesis of Emperor Nero in Britannia. She was a tough customer, a tough Bitch.

Tacitus and Dio record how Boadicea led a revolt against Roman rule that resulted in the burning to the ground of Londinium and to the queen’s death by suicide. I claim that I can trace my lineage back to her. This is hyperbole.

Thanks for the thoughtful article. I hope to read more.