In this post I’ve taken some of the suggestions you gave me in the comments of my first post at Bitch of your feminerd role models, and I’m going to help you figure out how to turn them into Miis for the Nintendo Wii.

For those of you not familiar with them, Miis are little cartoon avatars you can create on the Nintendo Wii, who then populate some of your games like Wii Sports and Wii Music. The first time I played Wii Music at my boyfriend’s house I was amazed at the selection of Mii characters he and his former roommate had created. I’d only ever thought of making a Mii who looked sorta like me, but they had a library of Miis resembling Einstein, Spock, Edgar Allen Poe, Batman, and many more. It was so much more fun to play duelling handbells with Spock vs. Mr. T than just with our own Miis.

I asked my boyfriend how they made the Miis and he referred me to a couple of websites, including MiiCharacters.com, which is probably the largest database of Mii characters complete with instructions on how to create them.

The problem is the vast majority of the characters listed are guys, and I couldn’t find very many feminerd role models. This might be partly due to the fact that, of all the Mii artists on the site, only one is a woman. In addition, there were a bunch of really racist Miis listed, such as the “Native American” and “Tribesman”.

I took your suggestions on your feminerd role models and tried to find instructions on making Miis for them for Nintendo Wii. There isn’t enough space to give full instructions on Miis here, but I’ll give you the list of the feminerd ones I did find on MiiCharacters, as well as a few I created, for which I’ve posted full instructions at my website.

Storm.  Commenter Shana said when asked about her feminerd role model: “It would be a tie between Jubilee and Storm of the X-Men. I got into the cartoon in the nineties and that was really the time when I started to recognize that I might be a nerd. Would say Jubilee because she young like I was at the time and just caught up in awesomeness and Storm because it was awesome to see a black female who was also a competent leader on TV.” Well there wasn’t a Jubilee Mii but here’s a link for Storm.

Batgirl. No one directly asked for her in the discussion of feminerd role models but when I wrote my post on Batgirl lots of people responded how much they liked her.

Buffy. Commenter Roo says: “My nerd role model is soooooooo BUFFY!” and judging by the other responses, she’s not alone. Throughout this column lots of people have brought up characters from Buffy. This Mii design is actually one for Sarah Michelle Gellar so you might want to change the hair slightly to make it more Buffy-esque.

First a quick apology that, try as I might, I was not able to create a convincing Felicia Day Mii. If someone comes up with one, I’d love to get the instructions. The instructions on how to create these Miis can be found here. 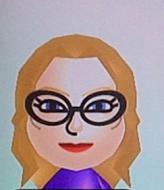 Penelope Garcia. I’d never watched Criminal Minds until so many of you suggested Penelope Garcia as a feminerd role model. Now I’m half-way through the season and I can really understand why. Garcia is an unapologetic nerd with attitude, a computer genius, and fan of RPGs. 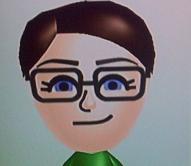 Rachel Maddow. She might not be the first one to come to mind as a feminerd role model but I’m including her because she’s awesome and feminist in so many ways and I love her “Moment of Geek” segments on her show.

Kari Byron. Kari is the only woman on The Discovery Channel’s MythBusters (which I love) and she’s pretty kick ass, whether she’s testing explosives, building miniature rockets, or going to a firing range after sitting in a freezing room for several hours.

Have you tried making any nerdy or feminist Miis at home?

I feel compelled to say that I highly approve of your inclusion of Mythbuster's Kari Byron in your list of Mii's. I had the privilege to meet Kari in Indianapolis at GenCon 2006, and I must say she's one of the most badass women in existence, other than my girlfriend. One of Kari's causes is encouraging young girls to get involved and and stay involved in science. As a male who has never bought into the bizarre belief that women have some natural handicap when it comes to science and math, I couldn't love this more.

Ms. Frizzle would be pretty badass as a Mii.

I once made a Mii of John Donne, which is nerdy, but not always feminist as per today's definition. I still love me some JD, though.

Good call! I will totally try to create a Ms. Frizzle Mii and if I do, I'll post the instructions on Gender Focus. A John Donne Mii is pretty wicked too.

Some of the other character Miis I made were Captain Janeway, Guy Fieri (Food Network), CJ Cregg from West Wing, Michael Cera, Chloe Sevigny, Mr. Bean, and Frida Kahlo. With the exception of Captain Janeway & CJ Cregg, which I made from scratch, the other ones were on MiiCharacters.com.

My boyfriend made a Genghis Khan Mii, once, as well, and I believe there's an Emily Dickinson kicking around somewhere in out Mii archive as well. It's been a while since either of us have played the Wii, so it's hard for me to remember.