Libraries are a haven for nerdy types, both as patrons and as staff. They also play an important role for social justice by standing against censorship.

I spent seven years working at libraries, starting to shelve books when I was 15 and eventually graduating to the check-in/check-out desks for a part-time job during university. Looking into libraries for this post I decided to talk to my former colleague Tara Robertson. 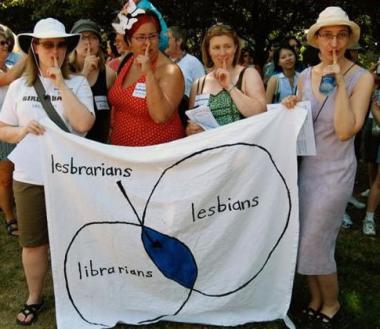 In 2009 Tara put together a group called the Lesbrarians to take part in the Vancouver Dyke March (photo above, with Tara second from left). Last year they had about 35 lesbian, bisexual, and queer women who worked in libraries, archives or other information organizations, as well as writers and library lovers participate. We met when we both worked at the Vancouver Public Library and she’s done quite a bit of work on LGBTQ and feminist issues, so I knew she’d be a great resource.

Me: First, can you tell me a bit about yourself?

Tara: I’m a librarian at an art and design university where I try to provide better access to information through better information systems. I’m a reluctant cataloger and an organizer in many senses of the word. I am allergic to shushing.

Me: What role do you think libraries/librarians can play in creating a safe space for queer patrons?

Librarians need to work harder at unpacking “nice lady” values and collaborate with our communities (including the folks who don’t feel welcome in libraries) to refine our library collections and services so that we are a safe and welcoming place for all folks. Doing this will make libraries safer for many people, including queers.

We can do this by providing free, unfiltered Internet access, and non-judgmental staff who can respectfully guide people to the perfect book or piece of information that they never knew existed.

Seeing your queer self reflected in a book that is on the shelves of a library is a powerful experience. I love the piece written by MJ Jordenson, a Vancouver Public Library patron, that describes how he came to the library to research a cure for his homosexuality and found self acceptance in the stacks.

I think libraries (at least in Canada) are pretty safe spaces for queers. We definitely have work to do to make libraries more welcoming and accessible for people who are not like us. Librarians need to work harder to challenge our attitudes around class, especially around people who are homeless.

Me: Do you know of any particularly notable initiatives by libraries to support LGBTQ communities?

Tara: The staff at San Francisco Public Library do an amazing job of putting together booklists for teens: fiction, nonfiction and kids. I especially love how the teen booklists include resources for transgender teens.

Me: Can you think of ways in the past that things like the categorization of books, subject headings, etc., have reinforced gender norms and heteronormativity?

Tara: I got interested in becoming a librarian by working in activist and feminist libraries. Library classification systems are informed by the dominant values of society and reflect the values of a certain time. Even today, “male nurses” and “women engineers” exist as subject headings. This is obviously problematic and an example of how classification systems sometimes lag way behind the times. The words we use are powerful, and the words that are used to define and locate people are often problematic and offensive.

Sandy Berman is a radical cataloger who was responsible for introducing subject headings like: two-spirit people (to replace berdache), intersexuality (to replace hermaphrodite), and transgender people. He also advocated for subject headings were less archaic: toilet (instead of water closet) and light bulb (electric light, incandescent). Until last year if you were looking for a book on how to make an Indian curry, the correct subject heading was Cookery–Indic.

Gender and sexuality often get mixed up by catalogers. I reckon this is partly because for many people these concepts are not different and partly because good subject headings don’t exist. The subject heading of “lesbian–identity” isn’t really appropriate for the new book Persistence: All Ways Butch and Femme, but currently there isn’t a better option. Catalogers need to create one.

Me: Is there controversy within the library profession about providing information resources and literature geared toward or featuring LGBTQ individuals (particularly in children’s literature or YA)?

Tara: When many people think about censorship and libraries they think of books being banned. This doesn’t happen very frequently, however there are many insidious ways that censorship happens.

Internet filtering is the most insidious form of censorship. Many commercial filters flag sexual health information by and about LGBTQ folks. For queer youth living in rural areas, the Internet might be the only way to access information.

Intellectual freedom is a core value of libraries. Most libraries will have a collection development policy that references the importance of intellectual freedom. There’s a slogan that says, “There’s something in my library to offend everyone.” For me, the things that offend me the most are materials that reflect racist, colonial attitudes, especially in children’s books like Little Black Sambo, Tikki Tikki Tembo, and some of the Tintin books.

In children and teen collections, a sneaky way that books about queers are censored is by hiding them in an area intended for an older audience. For example, sometimes children’s picture books that feature gay or lesbian families are moved out of the children’s picture book section to the parent resource collection. Or paperbacks for elementary school students that have a queer character are put in the young adult or teen section. This is an unacceptable form of censorship.

I am a teacher librarian in a small, overwhelmingly white, rural middle school. It's an uphill battle against their prejudice and limited worldview. One of the lessons that I do with my 8th graders when we are learning about the Dewey Decimal system is looking at the DDC and seeing what we would change if we were Dewey. Some of the students come up with pretty standard answers (separate sports into it's own section, put computers with technology, etc). But I always try to spend the most time on talking about the issues with the religion section and many of the subject headings highlighted in this article. I really believe that teachers and librarians (school and public) are obligated to bring social issues to our young patrons attention and teach them to become agents of change.

GirlLibrarian that is an awesome way to get your students to think critically about how information is organized on a meta level. Another rad teacher-librarian I know describes non-fiction as things that some people believe to be true, and fiction as other types of stories. My teacher-librarians were less awesome. They were more invested in enforcing proper library etiquette and a quiet reverence for the space and the books.

As a metadata librarian (newfangled name for cataloger, although I don't really do much cataloging) I've always been very interested in unpacking the Western biases in how materials in libraries are categorized. Looking at the larger LC or Dewey classes, it's easy from a Western perspective to think "Oh, this way of organizing the world makes sense." I wonder often about how we might re-think how we organize information on this large scale. For example, the classification of history is very influenced by colonialism, with World History having a class of its own, largely dominated by European countries, America having a class of its own, and the former colonial areas having a class of their own. Weird.

Librarianship is awesome, awesome work, and as I always say, is inherently progressive, so I'm happy to see it highlighted here. Thanks for the great interview!