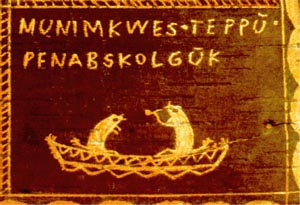 Earlier in this series I did a post on the bluestockings and a Facebook commenter suggested I do a follow-up piece on Japanese anarchist feminists. I thought now would be a good opportunity to mention them and some more feminerd forerunners from around the globe, including Kurdistan, Indigenous North America, and even ancient Babylon.

Obviously this post can’t possibly represent the extent of those women involved in knowledge-production through history. I selected these examples mainly via suggestions I received on Twitter and Facebook in response to the bluestockings piece. Most of the examples I’ll talk about came after the bluestockings, but I did want to mention two examples from much earlier.
Io9 posted this week about Babylonian Princess Ennigaldi, who established the world’s first known museum 2,500 years ago. Our knowledge of the woman who started the museum is incomplete, but we know as daughter of the king, her life duties would have been mainly religious, “both as the high priestess of the moon god Nanna and as the administrator of a school for young priestesses.” Ennigaldi’s school had been running for almost 800 years when she took over and although her museum contained only a few dozen items, many were as old to her as the ancient Romans are to us.

Sometimes it seems as challenging as reconstructing histories of ancient Babylonians to recover details about the histories of Indigenous peoples. In North America and other colonized regions we still struggle with the legacy of colonialism that devalued oral traditions and set out actively destroying Indigenous languages and cultures through racist laws and residential schools.

What is clear is that a tradition of elder women as sources of invaluable knowledge has been part of many Indigenous cultures, including through legends of wise grandmother figures. In the Mi’kmaq tradition Nukumi, created when the sun spirit warmed a rock and it transformed into her, became grandmother to Kluskap, the first man. The legends say her wisdom was crucial to the survival of Kluskap and the first Mi’kmaq people. The same character is known as Agaskw (pictured in etching above) in the Abenaki tribes and Nokomis by the Anishnabe.

Plains tribes have their version of the legend, with Spider Woman, the wise woman teaching the Navajo to weave. In some Hopi legends Spider Woman worked with the sun god to create the first humans.

As some of the writers in Feminism For Real point out, it’s easy for white feminists to forget that for many Indigenous people, the road to equality for women is not necessarily one of progress forward but of reclaiming historical egalitarian traditions suppressed by colonialism. These legends and other records of Indigenous cultures pre-colonization show that well before white women were fighting for the right to go to university, Indigenous women were valued for their wisdom.

Now jumping forward to Hapsa Khan, one of the earliest Kurdish women to lobby for women’s education as a tool for empowerment. In the early 1920s she established the first Kurdish women’s organization in Iraq and started an evening school for powerful women in the region. After her father’s death she turned the family home into a meeting place for writers and artists. Even though she drew flak for taking on a “man’s” role in this way, she continued to host these gatherings. Although Khan’s causes were arguably more about Kurdish nationalism than feminism, she impacted Kurdish gender roles by pushing for women’s education rights.

Around the same time in the 1920s, a handful of Japanese women were creating an anarcha-feminist movement. One of the most famous and possibly the most tragic figures in Japanese anarcha-feminism was Noe Ito, who was killed at age 28 in a purge of anarchists by military police. During her short life, Ito translated Emma Goldman’s writings into Japanese and established the arts and culture magazine Seito (“bluestocking”). She became an important figure in the Japanese anarchist movement and broke with social constraints of her time by leaving her first two husbands to pursue further education and political activism.

Takamure Itsue, another Japanese feminist anarchist, worked during the same era. Itsue rejected Western feminism and advocated a Japanese “new feminism” that emphasized women’s freedom and agrarian self-government. In 1931 she began a monumental research project on Japanese marriage, which she felt was tied in with women’s oppression. Her work on this project made her the first historian of Japanese women and her findings on Japanese matriarchal traditions have been invaluable for future generations of feminist scholars.

In North America, the Seneca Falls Declaration in 1848 made women’s rights to education a key goal of the emerging women’s movement. But while it was difficult for white women to gain entrance to traditionally male universities and to be taken seriously once they were there, it was even more challenging (and continues to be) for women of color.

Anna Julia Cooper was just one of the amazing woman who fought against those restrictions. Born a slave in 1858, she received a scholarship to attend school at age 10. She stayed at school until age 24 and during that time demanded access to the higher-level courses that were reserved for men. She distinguished herself academically at the school and became first a tutor and then an instructor. Cooper became an international speaker on civil rights and feminist issues and published a book A Voice from the South, which articulated a vision of empowerment for black women through education. Cooper lived to the age of 105 after becoming the fourth black woman in American history to earn a doctoral degree, when she was 65. Kjerstin did a more in-depth post on Cooper here at Bitch last winter if you’re interested in learning more about her.

So yeah, I’m a big history geek. I would love to hear your suggestions for more good resources on feminerds of times past, so leave them in the comments!

This is quickly becoming my favorite column on Bitch. Awesome.