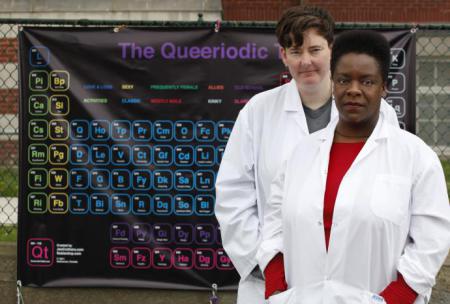 Vancouver artists Jen Crothers and Kona have created a delightfully nerdy project to raise awareness of queer language and its evolution, and to raise money for the local organization Out in Schools, which educates young people about homophobia and bullying. It’s called the Queeriodic Table, and it’s going places.

The idea for the Queeriodic Table came when Kona found a link to a Boing Boing article on a periodic table of cupcakes. After deciding making a whole series of queer cupcakes would be impractical, they started working instead on a series of posters and buttons. I asked Jen and Kona about how they put together the table:

Jen and Kona: Unlike many of the “periodic tables” on the Internet we’ve tried to stay as true as we can to the real periodic table. However, there were several things that we were unable to do. We were unable to keep the original letters of the table although we tried for a while. What aspect of the queer universe would be represented by “Xe”? Also, it wasn’t possible to map queerness onto the table in a way that would gesture at the qualities of the original table. Who doesn’t want to be a Noble Gas? It would have been fun to have the Transition Metals be a gender themed group, but there are 40 terms.

Where possible, we retained the idea of clustering elements that share properties in columns. We’ve spent dozens of hours on element placement and have built in jokes and intellectual candy for those who are observant and take their time with the piece.

Jen and Kona: We had such a positive response [in Seattle]. Of course, most people at the festival were straight but everyone could relate to something on the table. We dressed in lab coats, had a “sexy teacher” assisting us and spent hours explaining the project and what the symbols meant to hundreds of people. It was a blast.

Mostly people asked questions about elements that they were unfamiliar with. Elements such as the Australian “Lemon” for lesbian and the Caribbean “Zami” for black women who love one another. They sat in our desks and we schooled them. Sometimes they talked amongst themselves debating what elements meant in general or in their personal lives. Some people made repeated visits within one day or over the three days. They challenged us about the content and format, and gave us ideas about how to proceed next. The science nerds asked smart questions. A few people cried as they told their stories or learned new language to describe themselves.

It’s been really interesting to see how people engage with the project. Jen and Kona have found that initially people get drawn in on a superficial level, noticing that it’s colorful and clever: “But then they think. And then they have questions about what a particular element means. Why don’t we have X? Why is Y in that category? And so on. Big philosophical discussions can start in minutes.”

Because the table and the project are iterative and constantly evolving, just like the real periodic table, there are lots of opportunities for new ways to engage people. In Seattle Jen and Kona encouraged people to think about creating molecules of representation by combining individual elements, and they also provided coloring books with one element per page and space to write underneath. On their website, people can submit “Reflective Descriptions” of what the individual elements mean to them. Their answers are then curated into the website.

Another evolution of the table—the third version—will take place during June.

Jen and Kona: One thing we want to do is add even more words that aren’t centered in North America or in English speaking traditions. Additionally, we are looking at the concept of “isotopes” and how we might represent them within the project so that more queer language can be included while retaining the original nature of the table which only has room for 112 elements to be displayed.

Over summer we are presenting at the Queer Arts Festival and the Queer Film Festival in Vancouver and we’re researching other places to go.

Ideally, Jen and Kona are looking at using the Queeriodic Table as an educational tool across North America and beyond. Currently, most of the funding for their work comes from selling artifacts like buttons, magnets, posters, and the coloring book through their website, with partial proceeds going to Out in Schools. I’d encourage you to check out their site and engage with the discussion.

This is awesome! This is why I love Bitch blogs; I can easily find new and interesting information that I would probably never come across otherwise. Keep it up!

Yay in so many ways. My science nerd is leaping for joy right now.

!Kona here. I'm one of the co-creators. Thanks for taking the time to write about us. We look forward to continuing to evolve the table and to the participation of people online and at exhibitions!

I feel kind of weird about this. I think it's good that conversations are being started about all the different terms and identities that fall within the queer spectrum, but doing it through the periodic table seems kind of...regressive? Like, I get that it's kind of a cute idea, but this isn't cupcakes...these are people's <em>identities</em>. I don't see why these names and terms need to be classified in some sort of (however quirky) ordered fashion, I mean it's literally putting people "in boxes"(okay, maybe that's the incorrect use of the word "literally," but you know what I mean). The fact that the "mostly straight" Seattle audience was really into it has me raising an eyebrow, too. Just my two cents!

Interesting! I'm no expert when it comes to science (like, at all) but isn't the whole deal with the elements that they get combined together to make stuff, like with H2O? So with the Queeriodic Table someone could be part G (gay), part DK (Drag King), and so on? Again, I might be missing the mark with the science part of this, but I don't think it's putting identities into boxes so much as it is labeling different parts of queer identities. Maybe?

Yes, those are good examples of how it could be used to explore complex and intersecting identities! I think my beef comes more where it's like, "who is on this table," like, at some point someone has to decided if an identity or word is "queer" enough to be a part of this table, meaning it's significant who is and isn't on it, but also there are different categories like "ally" that is pretty fraught with politics. And it's more of the color-coding/labelling that has to do with "putting people in boxes" (I just couldn't resist saying that, I guess).

For example, I think they have altered this on their website, but on an earlier iteration of the table, the "allies" column included "trans," "intersex," "faghag," and "lesbro," which brings up pretty big issues of gender vs. sexuality, who gets to/wants to be an ally, etc. <a href="http://cobracunt.tumblr.com/post/6375125178/progressivelyminded-cobracun... was some talk on Tumblr about it</a> that made me start thinking about it. So yes, I think it's cool to see all these terms together in one place, it's just the science-y part that is strange to me, and the fact that someone is making subjective decisions about what and what doesn't go where.

I agree with the others. This IS really awesome! I didn't even know some of these terms existed. It's really cool and artistic how they put these things together. One word: coolbeans!

by Sarah Mirk
Three real-life stories of women in spaaaaaace!