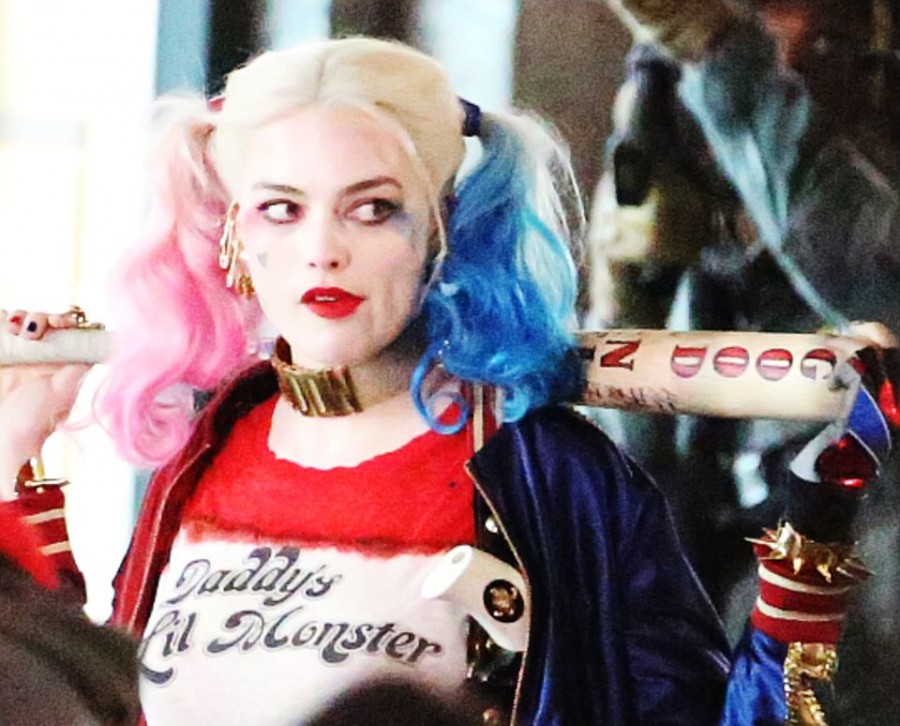 She sports pigtails and totes a bloody baseball bat. She is a mentally unstable psychiatrist in an abusive relationship with a serial killer. Comic book franchises are never short on femme fatales or righteous babes, but they rarely feature such complex feminist characters as the DC Universe’s Harley Quinn. Though she’s appeared in comics and TV shows since 1992, Harley Quinn makes her first big-screen debut next summer as a central character in Director David Ayer’s upcoming film, Suicide Squad.

The trailer for Suicide Squad shows Harley Quinn (played by Margot Robbie) and a team of other well-known villains working for hard-nosed politico Amanda Waller (played by none other than Viola Davis). Suicide Squadplans to turn the tables on the classic superhero film narrative, placing a dozen anti-heroes in leading roles. Since the trailer debuted on YouTube last month, it has been seen over 47 million times—this film is going to be huge.

Although she is often defined as the Joker’s “crazy, on-off girlfriend” Harley is a character with her own independent identity. Like most comic book characters, she has a few different origin stories, but here are the basics: Born in Bensonhurst, Brooklyn as Harleen Frances Quinzel, Harley was raised in a dysfunctional family environment. Her manipulative father has a criminal record, her mother is oblivious, and her brother is a freeloader. Despite childhood struggles, she excels academically and athletically, winning a scholarship to Gotham City University. During her psychiatric internship at Arkham Asylum, Harleen aggressively lobbies for the opportunity to work with the Joker. While she analyzes him, he seduces her. Believing she might be able to fix him, Harleen eventually helps the Joker escape. She enters a life of crime and an abusive relationship with the Joker. She adopts a new identity as Harley Quinn and embraces her darker, more irrational nature. 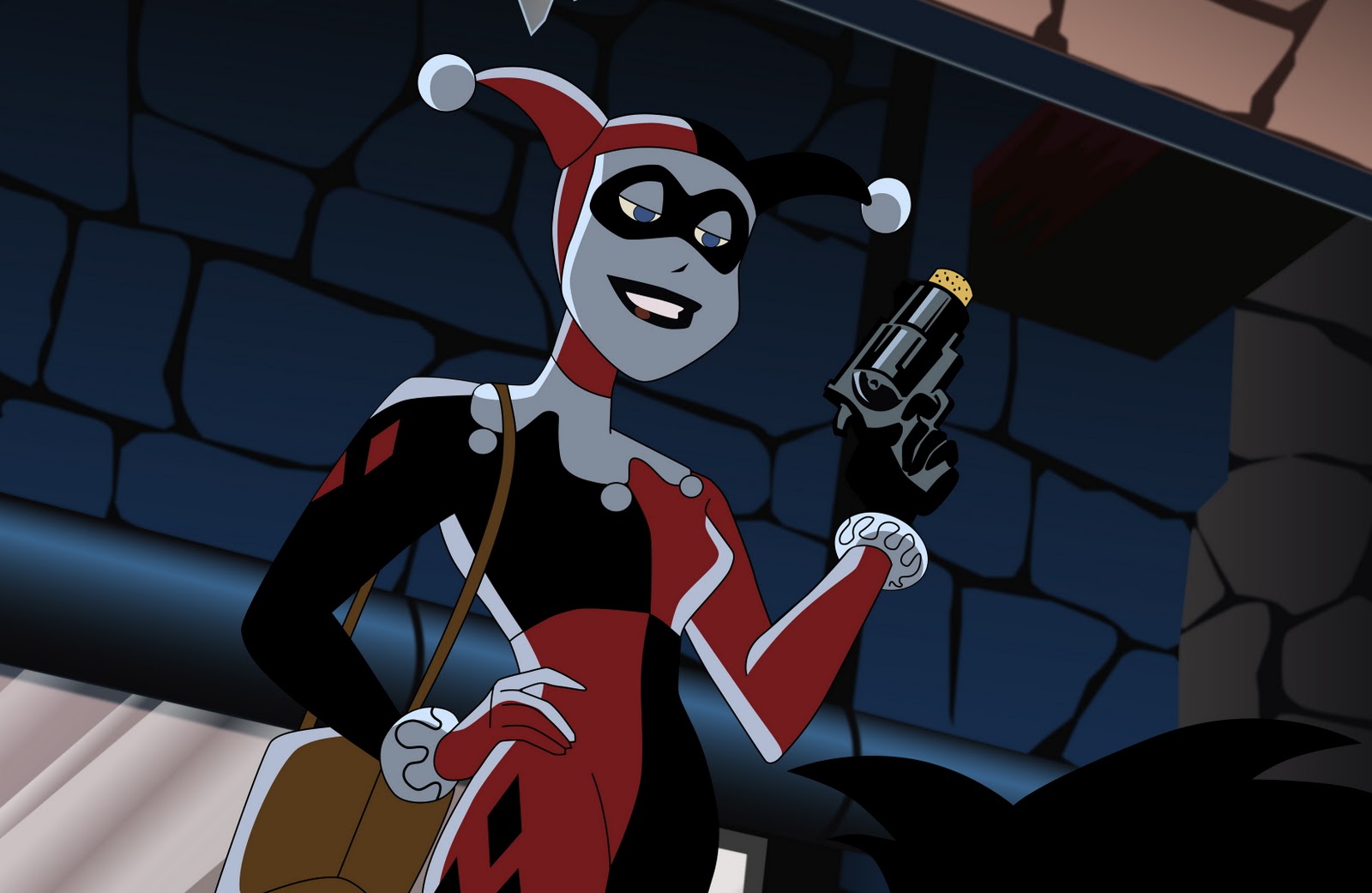 Fans have hungered for more Harley Quinn since her introduction in the 1992 television series Batman: The Animated Series. Originally conceived as a one-off character, the audience embraced her particular brand of Brooklyn brashness and unpredictable antics. Harley Quinn was so popular that she became a regular feature on the show. Eventually, Harley made her official print debut in The Batman Adventures #12, where she solidified her reputation as a dangerous but adored anti-hero. She featured prominently in The Batman Adventures: Mad Love (1994), a graphic novel that tells how she met the Joker while working as a psychiatrist and fell in love with him. In 2013, under DC’s The New 52 reboot, she received her own comic book series, which has consistently been one of DC’s top sellers. The Harley Quinn series focuses on her wacky, everyday adventures like managing an apartment in Coney Island, rescuing animals, and playing roller derby. 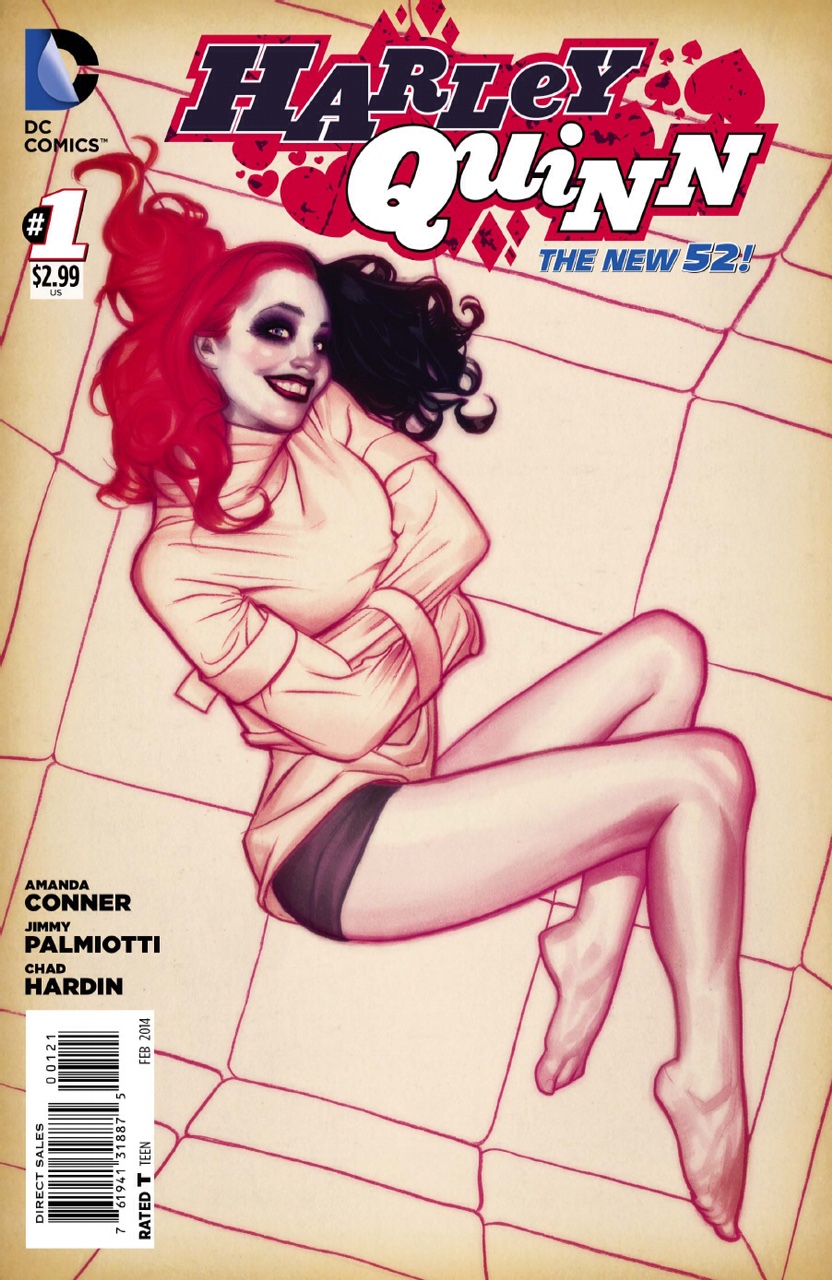 As an academically brilliant overachiever who pushes the boundaries in her personal and professional life, Harley Quinn’s simultaneous agency and codependency create the potential for a complex feminist narrative. Though Harley is an accomplished gymnast, she is primarily identified by her intelligence as well as her fractured mental state. She’s highly perceptive, manipulative, and smart. While most villains rely on guns and knives, Harley’s biggest asset and most dangerous weapon is her mind. The knowledge she possesses and her own psychological fragmentation make her threatening to both friends and enemies. In Legends of the Dark Knight #50, she astutely analyzes Batman during a brief meeting and accurately identifies the driving forces behind his crusade—no easy task. “Were they the victim of some kinda crime?” she asks Batman of his parents. He says nothing, but Harley immediately picks up on his reticence, asserting confidently, “Whoa, they were! That’s terrible, Batski, sorry to hear it.” She continues her analysis: “Subject shows signs of obsessive narcissism and clearly has anger management issues pertaining to childhood trauma…” We might laugh at her Freudian psychobabble, but she’s absolutely right. Moreover, she uses her humor as a weapon, disarming her opponents or tricking those who don’t take her power seriously. Going even further with her spot-on observations, she hits Batman in a sore spot: “That mask of yours covers all kinds of hurt, Batty, it’s very sad… is there someone in your life you can turn to like my Mistah J? A lovah?” Casually mentioning Catwoman, Harley senses that Batman’s loneliness is a weakness worth exploiting.

Harley’s relationship with the Joker is an important facet of her struggles with empowerment. This relationship and its abusive dynamic establish Harley Quinn as a woman grappling with intimacy, boundaries, and identity. In the comic books, the Joker tries to kill Harley on more than a few occasions. And while Harley also tries to kill the Joker, she always ends up back in his arms. Oddly enough, Suicide Squad could potentially initiate a dialogue about intimate partner violence. Instead of replicating the cutesy-demented cycle of Harley and the Joker’s “no, I’m going to kill you!” dynamic, I’m hoping the film will further explore why Harley is drawn to the Joker despite his disdain for and exploitation of her. 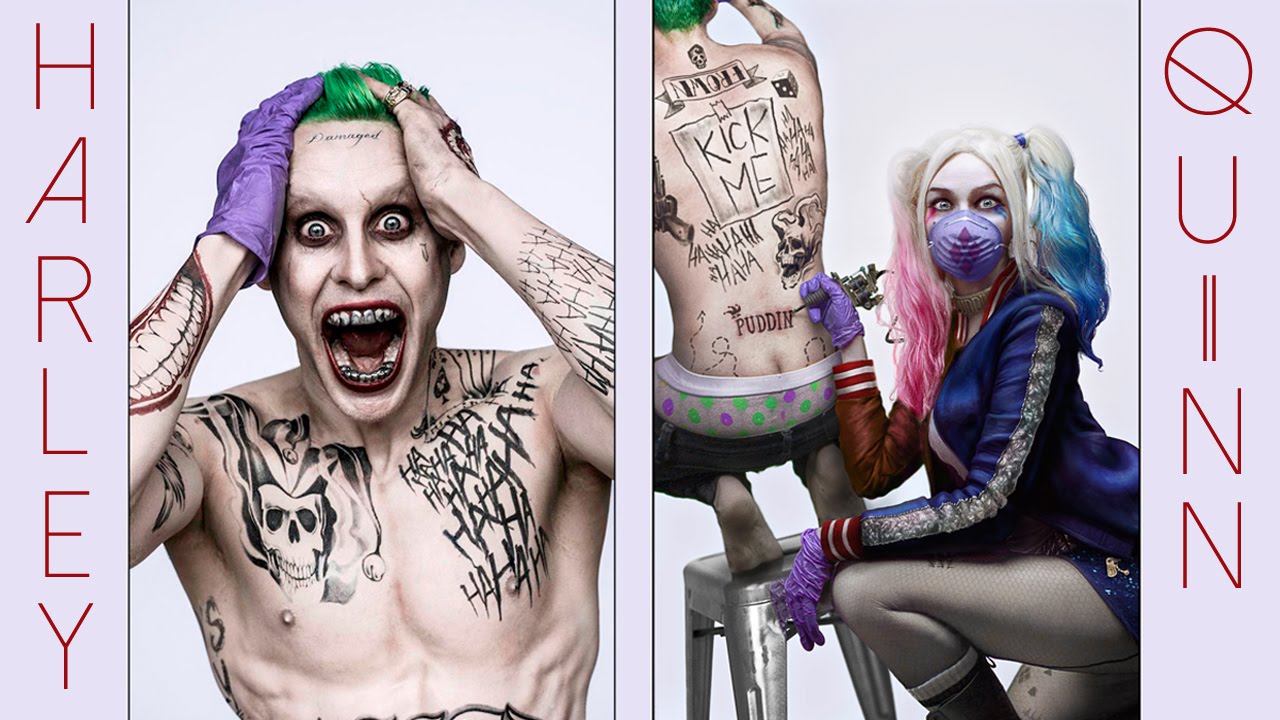 An elaborate fan cosplay of Joker and Harley Quinn in Suicide Squad.

Harley knows how to play to her audience, drawing attention to the identity politics of being female. In one of her origin stories, she tells a (literally) captive audience about her psychological transformation: “[The Joker] made me understand that in order ta be free, I hadda push aside what I knew an’ become a whole new person. Someone who could be anything they wanted. The sex kitten, the seductress, the innocent, the aggressor, the antagonist, the victim, the ditz… He really loved the ditz, so I played along.” Harley’s ability to swap identities in order to get what she wants speaks to our collective anxiety about authenticity and makes her both unpredictable and dangerous. In the episode “Harley’s Holiday” from Batman: The Animated Series, we see Harley—newly released and declared sane—roller-skating down the street with her large, snarling dogs. She’s chipper, but the gasps and stares of pedestrians start to make her anxious. Wrongly deciding that her outdated wardrobe is creating a stir, she goes shopping for a new dress. Unconventional Harley finds herself agitating fellow customers. Harley purchases a pink dress but leaves before the saleswoman demagnetizes the sensor. The alarm goes off. While we’ve all been in this situation, most of us wouldn’t rip the arm off a mannequin and start beating the security guard with it. Suffice to say, chaos, kidnapping, and a chase ensues. When Batman eventually brings Harley back to Arkham Asylum, he sweetly gives her the pink dress that began the whole mess. Harley repays Batman with a long smooch, and he doesn’t seem to mind. Moments like this, when Harley seems genuinely adorable and stereotypically feminine, make her violent, psychotic episodes even more challenging and disturbing. 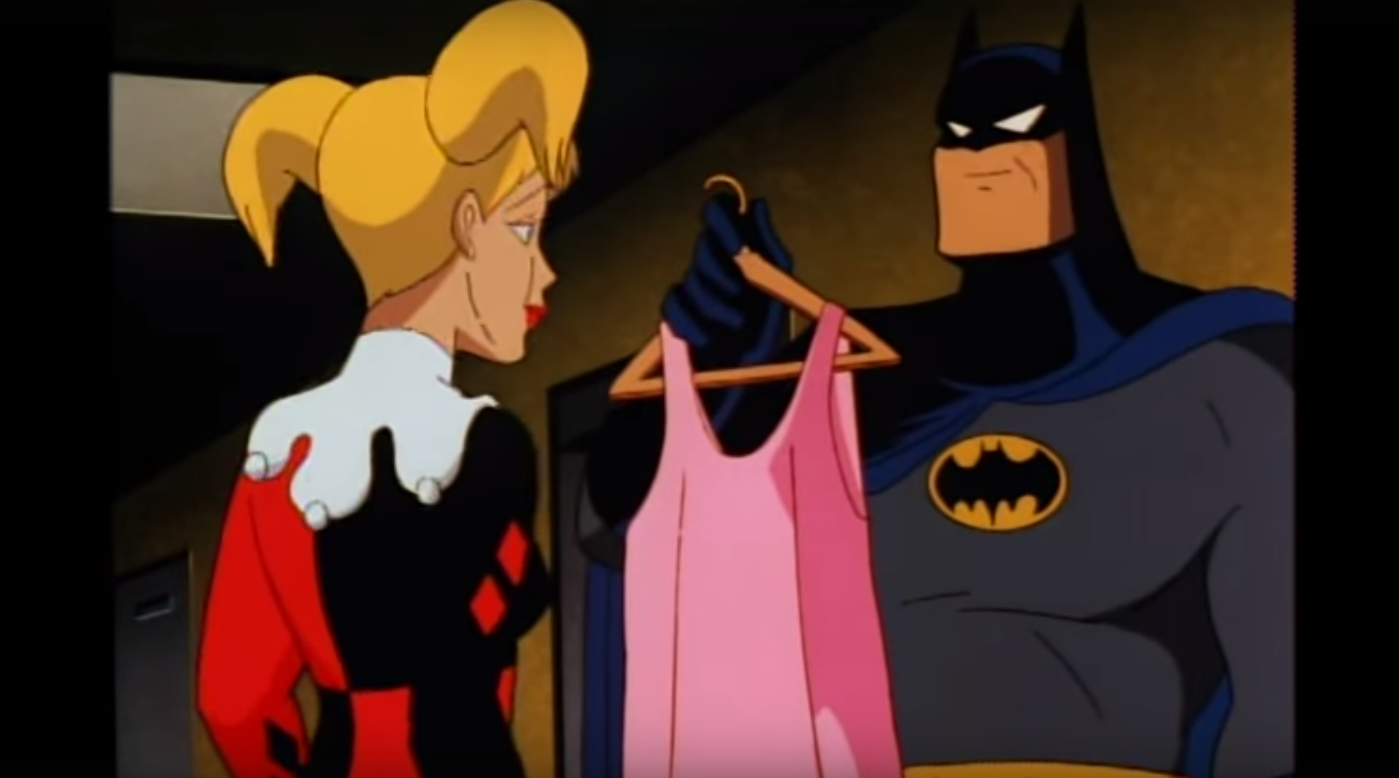 While actress Margot Robbie looks both sinister and cloying in the trailer, selecting an actress with a more public feminist reputation would have given Suicide Squad a fun twist. In a recent interview with Hollywood Insider, Joel Schumacher noted that Courtney Love had been considered for the role of Harley Quinn in his cancelled 1997 movie, Batman Unchained: “The standout character of the film would have been Harley Quinn, who in the end finds redemption for her villainous ways. She was to be complex, conflicted, and ultimately a good person underneath.” With Robbie’s polarizing performance as a wealthy wife in The Wolf of Wall Street, it will be interesting to see what she has to say about feminism and her approach to the role.

Harley Quinn should be framed as a complex anti-hero–a woman who, despite her own intelligence, talents, ambitions, and good intentions, fell for the wrong man and was driven to insanity. Suicide Squad has the potential to make audiences focus on a different kind of feminist comic book icon. Here’s hoping they don’t squander the opportunity.

Patricia Grisafi is a PhD candidate and English instructor. She has written for The Gloss and Luna Luna.

Relevant: Magdalene Vissagio Is Shaking Up the Comic Book World 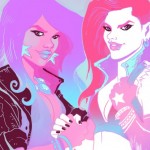 by Samantha Riedel
The trans creator is making moves at DC and Marvel.