I’ve been conflicted about The Girls Next Door ever since it debuted in 2005. On the one hand, I tend to think it’s sad that Holly Madison, Bridget Marquadt, and Kendra Wilkinson would want to be kept women for a doddering Hugh Heffner. If they’re really into the whole rich, sexy, polyamorous lifestyle, why don’t they want a guy who’s at least marginally attractive? But on the other hand, I don’t want to undermine women’s autonomy by applying my own values to their choices. Even if it bums me out to see someone buy into the whole gals-should-be-hot-and-guys-should-be-rich farce that has come to define the Playboy empire, I (reluctantly) have to admit that it’s their prerogative. 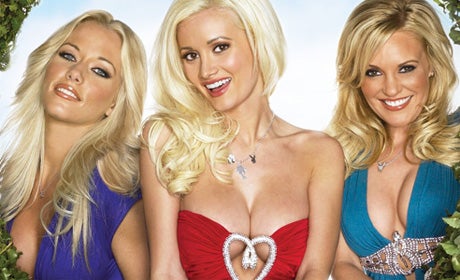 And E! wants us to know just how smart these bunnies are. Each of their bios at E! Online includes a “Beauty & Brains” section. Holly, for example, is studying at UCLA. (She’s also a Junior Editor at Playboy). Bridget’s got a Masters degree and she’s working toward another one. Kendra wants to be a sports announcer or a sports masseuse (although I suspect she has yet to pursue an education in either of these fields).

But if we’re supposed to give the Girls credit for intelligence, autonomy, or just plain-old professionalism, then what’s with the show’s producers constantly undermining them? Post-production sound effects and editing portray these women of “beauty and brains” as silly, vapid, and even ridiculous.

In last week’s episode. “Catcher in the Raw”, Kendra organized a playmate softball game because “There’s nothing like seeing sexy girls get down and dirty.” She picked out uniforms at American Apparel, scoured the Playboy encyclopedias for athletic-looking models to invite, and even took Holly to the batting cages to practice. “I do not consider myself an athletic person,” said Holly,  “But that doesn’t stop me from going out there and trying to bust some ass!” (Confession: Holly Madison seems really nice and I kind of want to hang out with her.)

Once the bunnies were assembled for the big game, it became clear that Kendra was the only one with any softball experience. Many of the women had never played before, and some weren’t even familiar with the rules. Not surprisingly, once the game started there was gratuitous posing and ass-wiggling for the crowd. But the bunnies still made an admirable effort. They played hard, they were good sports, and they even seemed to improve by the last inning. Too bad the producers chose to portray their efforts as nothing more than laughable slapstick.

Is it admirable when a woman tries a new sport, even if it means there’s a learning curve? Nope, slide whistle! What about when Bridget searches for the word “dugout” for half a second? Ditz cam! The difference between the playmates acting sexy for the crowd and being ridiculed by the camera is stark. It’s the difference between choice and objectification.

I actually tensed up when the butlers came out in pink cheerleader outfits because I was worried they were going to do some kind of horrifying playmate impression, but they only seemed to be making fun of themselves for the playmates’ amusement. In fact, I got the feeling that the softball game was more about women having fun than looking hot. (Even if Kendra did give out an award for the best tits. Sigh.) As Bridget said, “Softball was such a great bonding experience. We had such a great time.”

After this season wrapped, Holly and Kendra chose to move on to new men, and to move out of the mansion. They’ve been replaced by twins. I have to wonder if E!’s emphasis on the Girls’ intelligence will become even more superficial in Season 6, now that the women we got to know are going the way of so many of Heffner’s girlfriends before them. As for the twins: I predict kazoos in their future.

99% of E!'s programming is pure, unadulterated, TRASH whose sole purpose is to bring out the worst in anyone, celebrity or not. (Suffice it to say, I do not understand Chelsea Handler's relevance in entertainment at all. I just don't get her) A complete WASTE of a basic cable channel, so much so that my brain need not even think about boycotting it. I just do not watch it. Period.

Yet another reason I'm thinking of dropping DirecTV. Blech.

I don't know what to make of this show either. I guess it's nice to give a more holistic view of the women who are choosing to objectify themselves by showing them sort of engaged in other activities, but I think this show totally reinforces all the ideas people use to justify objectifying women. It's okay, it's just the super hot dumb girls I objectify! They totally like it! I don't know if I would feel better about a show about super hot lawyer girls either though, to be perfectly honest. Hm. Actually....

in fact so much of any art is in the editing.

I keep thinking about the kazoos and slide-whistles...

I do not watch this show, can't stand it even being on the air. Question-why is there not a 'Boys Next Door' featuring the guys from PlayGirl? I wouldn't watch that either. I am not an old-fashioned prude and I have nothing against sex or the human body, be it male or female, however, I am tired of seeing women's bodies fragmented thruout our society. A woman is more than just something to look at; we are whole people, each one an individual who should not be valued or divalued based upon appearance. AND I find Heffner disgusting; he has exploited women for years. Why do women tolerate this and why do many particiapte and play into it? Because we are taught thru society that in order to be approved of or valued, we have to be attractive and give men what they want while being less than we were made to be. It's time we teach our children and grown adults as well that it is time to be taught something new-to value a whole person. With so many women out here trying to balance work, family, career and trying to gain respect in the workplace as equal contributors so that we can get equal pay, why do some women feel the need to just drop their clothes-do they not realize or just not care that it makes it even that much more difficult for us? Not to mention the amount of sexual assaults and rapes that occur in this country, yet everywhere you turn, there's a woman, knowingly or unknowingly, playing into some sort of demeaning exploitation. I feel very strongly about this because I am a survivor of domestic violence and I have been and I also have young relatives who were victims of sexual assault. It's high time we stop allowing ourselves to be viewed as sex toys and objects-too many of us get hurt by it.

Watch all episodes of this show!