You might have missed it earlier this week because you were doing something more important with your time—like Jazzercising, or building a tiny city out of Triscuit crackers and cream cheese, or watching some kind of filibuster—but some conservative strategists have decided that, in order to court those darned Millennials who failed to elect Romeny in 2012, they are going to have to start talking to them on their terms.

You know, throw on some skinny jeans, get tattoo of tiny mustaches on their fingers, and perfect that ironic, detached style of humor that all you young folks love. Yes, I was lying about the first two items on that list, but am dead serious about the third: according to a wonderfully reported piece in Salon, some conservative groups have decided that the way in with the youth vote is to take hip humor and apply it to the regressive stances that make their party so unpopular in the youth demographic. Yes, folks —some GOP organizations have decided that the key to reaching younger voters is to try to make abortion funny. But don’t take my word for it—take it away, Kristan Hawkins! Quoth the Salon article: “

‘You can engage with sarcasm, it’s hard with the abortion issue, but you have to,’ said Students for Life president Kristan Hawkins at a breakout panel at the Faith and Freedom Coalition Conference in Washington today on how to win millennial voters. ‘Unfortunately we have to, because this is the generation that we’ve been dealt.’”

Step back, right-wing strategists—we own this.

Abortion jokes—not the awful, shaming kind that you see on, oh let’s just say for example “Family Guy,” but the awesome, funny ones that are used to point out the hypocrisy of American culture’s take on the issue—have been a staple of liberal political comedy since abortion first became an issue of public discussion.

Joan Rivers told a veiled abortion joke about a friend who had had “14 appendectomies” on television in the early 70s. Rivers discussed the joke in a 2010 NPR interview, saying;

“I was the first one to discuss abortion, and it was very rough. … And I couldn’t even say the word abortion — I had to say, ‘She had 14 appendectomies.’ … And by making jokes about it, you brought it into a position where you could look at it and deal with it. It was no longer something that you couldn’t discuss and had to whisper about. When you whisper about something, it’s too big and you can’t get it under control and take control of it.”

1. Free Neurotica is the Austin, Texas-based sketch project of comedian Valerie Niece. In this skit, we find out what it would be like if every medical procedure was as fraught with unnecessary restrictions as an abortion. Here’s a hint: “God has a plan for your gallbladder”:

2. Deanne Smith is a brilliant stand-up comic who has appeared on Last Comic Standing, HBO Canada, Sky TV, and won awards at the Edinburgh Fringe Festival and a billion other places all over the US, Cananda, and Australia. Here she is on the confusing wording of anti-choice bumper stickers:

3. You know what The Onion News Network is. So let’s take the time I would have spent explaining that, and use it to enjoy this video skit about a proposed law that would make women seeking abortions set up and paint a nursery first:

4. You probably know Emmy-winning comedian Wanda Sykes from her work on “The Chris Rock Show” or “Curb Your Enthusiasm,” her own show “The Wanda Sykes Show,” her performance at the White House Correspondents Dinner, or her activism work for same-sex marriage in California. She is as multi-talented as she is hilarious (so she is very multi-talented). In this bit, she weighs in on who is entitled to know about your abortion (joke starts at 4:26):

5. This George Carlin routine about anti-choice activists is the one that everyone puts on their Facebook wall to shut down a distant relative or friend of a friend of a high school friend who decides to preach some anti-choice rhetoric at you on what was just supposed to be an innocent post of brunch photos. But sometimes things are classic for a reason, people!:

In 2009, comedian, actor, and writer Jenny Slate starred in “Obvious Child,” a short rom-com, written by Gillian Robespierre, Anna Bean, and Karen Maine, and directed by Robespierre, that features an honest, compassionate, and humorous look at abortion and dating. The brief film is the anti-Juno. And if you like what you see below, you’re in luck—Obvious Child the full-length feature film is in production, and should be released next year.

Read the rest of this blog series on feminism and comedy!

I loved this article! I found Obvious Child when I was doing a project on conservatism in romantic comedies. I was super surprised to find that little movie when I was doing research. When I showed the movie, I think some of the class was stunned, some people let out nervous giggles, and some people laughed outright. I was a little afraid that I was going to have someone screaming at me, but it turned out every single person in that class was comfortable with the film, or was respectful enough to acknowledge that everyone should have control over their own bodies. Thanks for this!

All things considered, what kind of right-wing abortion joke could be made? "In the past, they used coat hangers. Now, they use the tactics of Satan. But have they tried using... THE WORD OF OUR LORD AND SAVIOR JESUS CHRIST, OUR GOD WHO DIED FOR OUR SINS, AND HUNG UPON THE CROSS FOR SLUTS LIKE THESE??? *laugh track* This fall, these misguided women find out what happens when you stop being equally protected under the law... and start getting /real/."

It would be great if a video of a Canadian comedian could be viewed by Canadians in Canada. Please check videos regional limitations before posting to an international audience... And if there isn't an internationally available video anywhere in cyberspace, perhaps a transcript would be useful.

I always love the content of posts, but it's SO jarring when there's been no editing and I have to read "Corresspondants Dinner" instead of "Correspondents Dinner." Takes me right out of the what I was reading and makes me wonder why you're skimping on copy editors.

It would be nice to link to the videos, or at least give some information as to how to find them. Seriously.

Thanks to a technical glitch, the videos disappeared from this post for a few minutes this morning. But they're all back up now. Sorry about that.

Yeah, all of these links go to the main pages of the sources mentioned, not the actual videos themselves. :(

You forgot about Bill Hicks! He does a great routine about abortion and antis.

Question: I am a new stand-up comedian, and I'm female. I told this joke at an open mic, "I had an abortion today. It really sucked the life right outta me." which was met with pretty strong disdain by some of the other, more-experienced comics. All male, but they said it was an insensitive joke, and that it could alienate audience members. I thought this was weird considering that guys tell jokes about getting ugly girls to eagerly suck their dicks. Ya know cause they're ugly. -_- And there are lots of jokes like that.I just want to get some more opinions on it, from other pro-choice feminists. 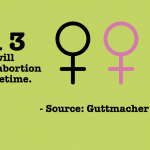