Sapphic Salon: Kristen Stewart will share a mere moment with Dakota Fanning in “The Runaways”

At the premiere of New Moon last night, there were screams of "Team Edward" and "Team Jacob," but I was the only one thinking "Team Bella." To be more accurate, I'm more Team Kristen Stewart — I didn't like the movie too much, and appreciate the actress's other work a little more, as she seems to do herself.

What I can't wait for is Kristen's turn as Joan Jett in The Runaways, a film about the first ever mainstream all-female rock band. I have faith that she'll do it convincingly, as she's spent a lot of time with the lesbian legend in preparation. 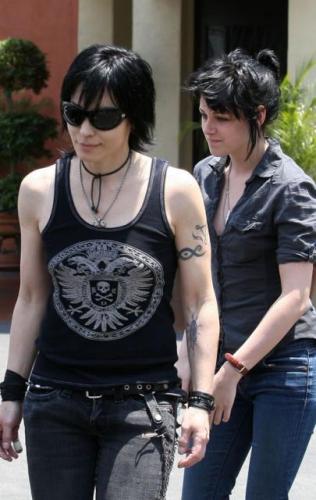 Kristen's New Moon co-star Dakota Fanning plays Cherie Curie in the biopic, and she told the press that there is a "passionate" make-out scene between the two young actresses in the film:

" They're best friends in the film and became really close in real life. And that's something that went down back in the '70s." 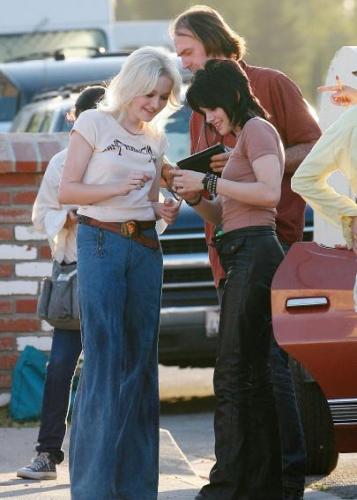 Ahh yes, the '70s — two decades before Dakota was born! Still, I'm hopeful that this won't get blown out of proportion, and not just because it could be like every other "lesbian kiss" done in film and on TV. I'm mostly worried that the make-out will be focused on rather than the talent and trials of the women that were The Runaways. Joan's sexuality has always been relatively acknowledged as a non-issue, though we were happy to claim her as one of us when she began rocking guitars with "DYKE" stickers and writing explicitly Sapphic songs.

The problem with the "lesbian kiss" is not only that it can sometimes be gratuitous (although I assume in this case it is not), but that it can take away from an otherwise interesting film. It can be a distraction, and not so much for us gay women, but for others who see the film, perhaps only because it is Bella kissing that chick from The Secret Life of Bees. 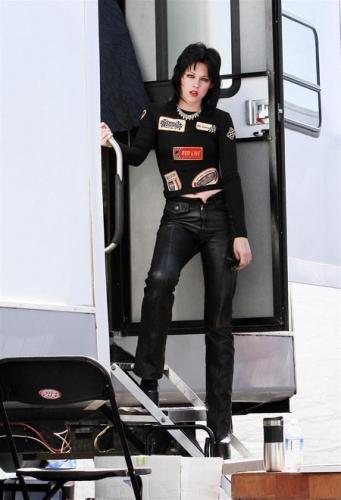 This just recently happened with Jennifer's Body, which I referenced in my last post about Megan Fox. However, a film about The Runaways deserves a lot more attention and ticket sales, in my opinion, and I'm just glad they didn't degay Joan. I'm looking forward to seeing the film, in its entirety.

I agree on the lesbian kiss as distraction. I don't want to say films shouldn't include women kissing, because that would limit visibility for us queer ladies. But, I want to see queer women kiss because it makes sense for the characters and moves the plot forward, not because they sell tickets and titillate men. Basically it's what good movies do with plot elements, so let's see it happen! Sexy scenes are hot, but gratuitous and male-idealized lesbian scenes are crap.

They rock and I am so excided about the movie... fuck the kiss, I want to enjoy some music!

Many aren’t yet satisfy on watching the movie, thus, they are spending money to grab its book collection. The cast and staff are surely rejoicing today, as the movie is now record breaker. <a rev="vote for" title="New Moon’ Opening Weekend Sales Make the Record Books" href="http://personalmoneystore.com/moneyblog/2009/11/23/new-moon-opening-week... ">New Moon opening weekend</a> sales were the third-highest of all time. Only "Spiderman 3" and "The Dark Knight" had bigger opening weekends at the US box office.“New Moon” also pulled in the most money for midnight ticket sales, earning $ 26.3 million at the US box office Thursday before the early morning Friday shows. It's likely that people who were light on cash bought tickets with allowance money, and filmmakers and theaters don't care where people get their money.