Next week’s episode of Law & Order: Special Victims Unit will feature Kathy Griffin playing a lesbian activist named Babs Duffy. The comedian and self-professed friend of the gays has been talking up the episode, “P.C.,” with several press outlets in the past few months. She spoke highly of working with Christopher Meloni and Mariska Hargitay, the latter’s character, Detective Olivia Benson, being a large reason the show has such a huge lesbian audience. 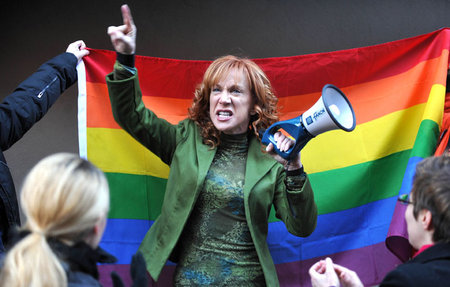 Detective Benson is a strong, determined woman who prefers mental beatdowns to physical assaults, but isn’t afraid to use her police training (and gun) when necessary. She’s been on a few dates (with men) over the course of the show’s long run, but has yet to have a long-term relationship. That being said, there are a lot of us who have held out hope that Olivia Benson could possibly swing both ways. 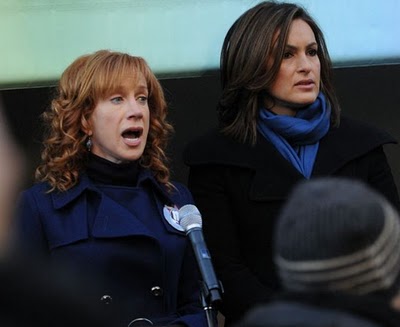 Kathy Griffin divulged that she’d not only be playing a lesbian, but she’d be kissing Mariska on the episode:

“I was so nervous about getting my character right that the last thing I gave a s–t about was kissing a girl. “When it came to the actual kiss, I kind of don’t remember it. I’d love to sit here and say her lips are soft, but you’d have to ask Babs.”

OK, so moving on from the fact that she fell into the category of straight-celebrity-female-needing-to-comment-on-kissing-a-woman, I’m a little more concerned with the portrayal of Babs on the actual show. Here are a few clips from “P.C.”

The lesbian leer at a straight woman:

And, lastly, the lesbian forwardness that ends in a homophobic comment:

While I have yet to see the entire episode, I have a good idea what I’m going to get: Lesbian man-hating, anti-feminist clichés and the perpetuation of both as mainstream ideals of gay women. And from this interview with Kathy on the set, it seems like producer Neal Bauer wrote this episode to be “funny.”

SVU has had several other LGBTQ storylines on the show (including The L Word’s Katherine Moennig playing a transwoman who murdered the boyfriend who found out she didn’t have female genetalia), but they’ve led me to the conclusion that the writers don’t quite get it. (Ironic that this new episode next Tuesday is called “P.C.”)

I could be wrong and these clips, out of the context of the whole episode, could be misleading. The episode could end up making lesbians look anything but narcissistic and pushy man haters with an agenda of only keeping themselves happy and safe while putting the moves on women they are convinced should be gay like them. Please, NBC, let me be wrong.

I didn't know that Kathy Griffin was going to be playing a lesbian in this episode, but I have to say that I'm a little surprised given the promos for the show. I'm pretty sure that the promos running on NBC show Kathy Griffin talking to the main male character on the show (I don't watch it, so I don't know their names) and saying "you are rather hot" (or some kind of variation of that) and then the two of them kissing.

I don't know how that scene actually fits into the story line and how it is going to work with the overall story line, but having a lesbian character kissing a man on the show kind of falls into the idea that women are only lesbians because they haven't found the "right man" yet. I don't know if that is how the episode is going to portray it (I certainly hope not), but that's the first thing that I thought when I saw the title of this post...

Yeah, it's SVU. I wouldn't hold out a lot of hope for a sensitive, nuanced portrayal. Unfortunately. That show has become nothing but sensationalistic in its later years.

It is a lot of fear-mongering and heavy handed portrayals of how some non-mainstream demographic ends up being "just like you and me" (everyone is vulnerable or a liar in the end). Wrong framing, SVU writers.

Yet I can't help but get some nearly involuntary satisfaction from watching rapists go to jail. 'Cause it happens more on teevee than in real life.

Unfortunately, the skepticism in the central review was spot on; and, this episode was far worse than simple sensationalism. The treatment of a supposedly charasmatic lesbian-rights spokeswoman was downright politically egregious. Kathy Griffin's character -- who in the 21st century is called "Babs" Duffy? -- is a sexually-omniverous twit who spouts what can only very loosely be called "ideology" of the most primitive and archaically-sterotypical variety. The other lesbians portrayed are shown to be largely intolerant sheep. Frankly, I'm a straight woman and I found the whole portrayal embarassing; halfway through the show, one of my best friends (who happens to be a lesbian) called me howling with laughter...laughing AT, not with the script. What I really don't get is this: How could Kathy Griffin -- allegedly a major gay-friendly entertainer -- not find this script offensive? Or is it a case that she IS Babs Duffy, i.e., anything for publicity and a buck?

Law & Order: SVU rarely "gets it" when it comes to, well, pretty much any issue. It's just the nature of the beast, along with the fact that the show has pretty terrible writing. Not to talk smack about SVU, I love the show and I've been watching it for years, but it really has to be taken with a grain of salt to be thoroughly enjoyed.

Honestly I'm not surprised. While I love watching SVU, I also recognize the many ways in which it's problematic, just one of those ways being that they are extremely heavy handed and lack subtlety or real understanding when dealing with the "issues."
That said, I'm also a Kathy Griffin fan, and I'll definitely be watching.
She said on her twitter that the kiss was edited out of the episode, though.
And I still maintain that there is some serious chemistry between Olivia and Alex Cabot.

RT @kathygriffin Awwww. Dick Wolf took out my BIG KISS w the sexxxxy Mariska H from "my" ep of L&O SVU March 3rd. Is the clip really on Perez? I wanna c it.

I'm not sure if there is a forum for people that actually sat through this episode, but i was appalled! This SVU was an obnoxious, offensive joke. it was total hogwash. I'm all for watching crappy, mindless television on occasion, but sitting through this was excruciating and only got worse as the plot thickened and the stereotypes flattened. I almost had the sense that it was a spoof on kids in the hall or something. I'm offended that Kathy Griffin "friend of the gays" would follow through with this script after reading it. and in the end, when she felt the need to announce her personal relationship with a man, rather than presenting it with an open mind to further her character's mission of enlightenment and acceptance of the gay community, she faltered and practically apologized for being bisexual. And amazingly, the crowd booed her for her personal choice.

The fact that they cut a kiss scene with Mariska Hargitay also makes me shudder. What was the point of this episode. Honestly, what was the point. How in any way whatsoever, did this contribute to overcoming the plight of the gay community?

I worry too that this episode could possibly have been well received by its audience!

Thanks for the update, molly. I don't have cable anymore and I was curious. It's incredibly disappointing that queer characters are still, still, still nothing but (as you said) flat stereotypes in popular entertainment.

I wonder why doesn't anyone ever have a gay scene on TV between two men? At least once, I'd love to see Eliott being kissed by another guy, and how he'd deal with it. It might be an amazing moment. Knowing Eliott and how sanctimonious he is, there would be violence and then, most likely, a speech about how he's better than the perps he puts away. And he'll find a way to work his kids into the equation. The tired ol' SVU formula. I'm gay for this show.

Relevant: G.L.O.S.S. and the Unbearable Weightiness of Success 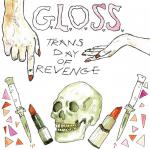 by Katie Presley
The Olympia punk band has broken up.