On Language, with Amanda Valentine, Part 1 Amanda Valentine is an award-winning game editor and book reviewer. The host of the 2013 ENnie Awards, Amanda is always busy and in high demand. Her approach to editing is thorough and attentive to the importance of language choices. This two part conversation with Valentine covers what she’s working on now, and how she works as an editor to assist authors in crafting books with inclusive language. As the number of women both creating and playing tabletop games continues to increase, thoughtful approaches to gender in games texts will also continue to be part of the ongoing conversation of making gaming a more inclusive hobby.

What projects are you working on right now (that you can talk about)?

I’m finishing up The Paranet Papers, which is a supplement for The Dresden Files RPG. I’m continuing as the managing editor for Marvel Heroic Roleplaying. I’ve also been editing some short stories for up-and-coming author Jocelyn Koehler (not that I’m biased or anything, but I think you should check out her stuff). I think that might be all that I’m allowed to talk about right now! Lots of things going on, though. I’m enjoying my forays into fiction.

Where in RPG books have you seen gender biases come up in the writing? (Most gamers can point out books that use only “he” in examples, have sexist examples for women, mankind vs humankind, etc)

Most of the people and companies I work with are consciously working against gender biases. Occasionally I encounter someone with strongly held old-fashioned beliefs who actively gets in the way of our efforts, but that’s definitely the minority—and we find ways to work around that!

However, I’ve been working on a sooper sekrit project that’s being translated from French—that’s been eye opening! Just…wow. There are a lot of awful stereotypes casually thrown around that wouldn’t be even remotely acceptable here. So that’s required a lot of Americanizing in really fundamental ways—it’s so much more than just equalizing pronouns. That was some pretty severe culture shock for me.

As the mom of young gamers, I’m sensitive to the gender stereotypes that get thrown around, but in the games we play and the games I work on, I really see more good examples than bad. But we make conscious decisions to limit the stereotypes and biases our kids are exposed to and to discuss the ones they do encounter.

Tomorrow is the second and final half of this interview with Amanda. Come back for some thoughts on gender in game writing, and the portrayal of sensitive material in game texts. 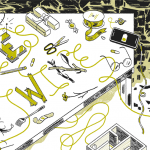 by Carli Velocci
With text-based Twine games, game-makers are writing new stories about trauma, body horror, and gender like never before.