On Publicity, with Jaym Gates Jaym Gates is an editor and author, in addition to being an experienced stage manager. All of these skills are put to use in her work as a publicist; from being one of the public touchstones of SFWA (Science and Fantasy Writers of America) to her work with the Nebula Awards and the game company Paizo, she’s constantly building bridges between different communities of creative professionals and their audiences.

What led you to you become a publicist?

I was working for Fantasy Magazine, when I was 21, as an intern. I’d been hired for editorial work, but got bored pretty quickly. The editor suggested that I move to marketing, and it just worked out brilliantly.

Who are some of your current clients?

My current clients include Paizo Publishing’s Pathfinder Tales fiction line, the Science Fiction and Fantasy Writers of America, and the Nebula Awards. I also have a handful of individual authors I’m working with.

When did you decide to branch out to working with gaming-related companies?

I never really made that decision. I knew the guys at Paizo, so when they approached me with an offer, I jumped on it. I hadn’t realized how many people I knew in the gaming industry until I went to GenCon.

Why do you think some of the public relations (advertising, communicating with the audience) aspects of games companies conducting business goes wrong?

There’s still the sense that publicity is kind of the new kid on the block. It’s really not well-respected in any business, which is too bad, but in publishing and gaming, it’s definitely the bottom of the heap. And that’s exactly the wrong way to look at it. Your reputation is everything in an industry saturated by choices, and more attention needs to be paid to that. Companies need to be incorporating their customers and fans into their plans, and considering them as individuals, not as dollar signs. Instead of hustling for every last dollar on each game, they would benefit by playing for the long view.

It’s also a matter of ‘getting your teeth out of your own heart’, as my girlfriend says. Instead of protecting our little patch of turf from all outsiders, we need to accept that gaming and geekery are popular, marketable things now, and just at the beginning of their ascent. It’s not about selling out, it’s about getting the money to make our clubhouse way cooler than it was before. Until we accept that, we’re going to be losing out on a lot.

It’s the same in publishing. As the SFWA publicist, I am actively campaigning to step outside of the genre boundaries. We’re reaching out to the mainstream, to romance and mystery, to DARPA and NASA and the mainstream magazines. The results are incredible (though please note, I am absolutely not taking credit for all of this, it’s a group effort), and slowly but surely, we’re able to get more eyes on SF because we’re opening our doors to the land of ‘here be dragons’.

Where do you think gaming companies ‘get it right’ when it comes to their PR?

By being accessible and visible, and by offering so many opportunities for fans to get involved. Gaming fosters a rare breed of fan, one very similar to the sports fan but even more engaged. Many of them are also excellent about actually listening to the fans’ feedback. That’s a really tricky road, trying to balance your fans’ wants with your own needs, but sometimes just making the effort counts for everything.

Most of them are also pretty good at communicating. What they have coming out, what the fans will get out of it, what the developers think, and so on, and that keeps people engaged and talking.

How do you think companies can change their public relations efforts for the better?

That kind of ties in to the “where does it all go wrong?” question. Build your authors, artists and designers as household names. Foster loyalty from fans and professionals—and really, with so much overlap, it’s just bad business to not court both—even if that means losing a little money in the short term. Be honest about mistakes. Look at the changing demographic, and work to build loyalty and interest in both old and new fans. Stop competing with each other and start working together to leverage more of the market. Learn the opportunities.

I keep hearing “The RPG industry is dying! Publishing is dying!” Um, no. When I stop see multiple instances of “Well, I’d give you my money, but I didn’t know you had Product X or it wasn’t available in Common Format Z,” I’ll believe that we’ve tapped our market. For now, it is a matter of communication and constructing a viable network of fans, professionals and opportunities. There’s a lot of joy, money and future in this industry, and I for one would love to see it reach its potential.

I doubt this is the appropriate place to put this, but just so you know, all the Save vs. Sexism posts show up in my Google Reader with "Normal 0 false false false EN-US X-NONE X-NONE" instead of text. Don't know if this is on your end or mine, but since it's always Save vs. Sexism, I figured it might be on your end. 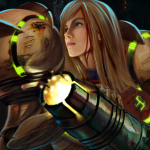