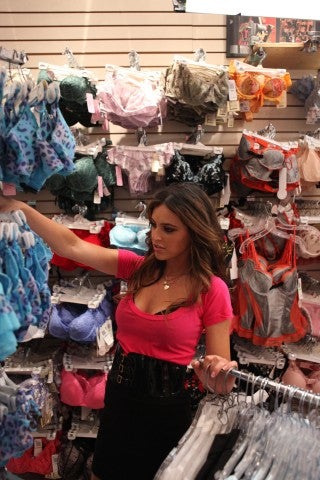 If you’ve ignored your better judgement and checked out Secret Girlfriend on Comedy Central, then you already know it’s the worst show on television. The constant sexism and occasional racism are big problems, but to find out what makes this show so unwatchably bad, look no further than the description from ComedyCentral.com:

Based
on Atomicwedgietv.com’s groundbreaking comedy series of the same name, the show follows you, your buddies and your multiple girlfriends as you deal with wild pool parties, lesbian bars, Internet fame and more. Each episode is shot entirely from your point of view and contains two back-to-back mini-sodes in which you navigate the local nightlife, hang out with friends, and try and decide which girlfriend to hang on to while keeping them from finding out about each other.

That’s right, the show is shot entirely in first person (second person?), from the point of view “You”. You is a white heterosexual man in You’s 20s who must be extremely charming and good-looking because every woman You meets wants to do You. We see other characters interact with You by addressing the camera, but You remains silent, and the viewer can only see You speak through You’s text messages, which don’t get much more interesting than “Be there soon.”

You basically spends the episode following You’s wacky friends around while they unsuccessfully hit on women and make jokes that invariably fall flat. You always ends up in proximity to women undressing, pouring drinks down each other’s shirts, or performing public sex acts. You also likes to ogle women by zooming in on their body parts – it just so happens that every woman at every place You visits looks like an underwear model – and these women LOVE to be zoomed in on. In fact, every one of them responds with come-hither eye contact. The idea is that the viewer can live vicariously through You while you get lucky.

That makes it one of Comedy Central’s strongest shows.

I can only guess that impressionable adolescent viewers are more intrigued by the premise than the T&A: 20-something dudes not working, getting wasted, dating lots of girls, etc. I admit it seems
pretty fun from a teen perspective, and these activities wouldn’t be so bad in a different context. It’s just that this context is built around representations of women as giggling sex objects who happily go home with the men in the car next to them, or get turned on when they catch their neighbor spying while they do yoga. (Yep, those things happened. No, it still wasn’t interesting.)

Seriously, can’t we just go back to the bored-housewife-meets-delivery-boy thing?

The only reason why I even watched part of the first episode is because i was too lazy to find the remote. I felt instantly stupider after watching it, it's seriously one of the stupidest shows ever.

Watching ice melt is more interesting than this show.

"The only reason why I even watched part of the first episode is because i was too lazy to find the remote."

I don't have a remote, so my reluctance to get up and change the channel after Daily Show and Stephen Colbert is why I've seen pretty much anything else on that network. I ended up watching half of that stupid puppet show the other night before finally getting up with a mental, "Arg, you effing racist, I keel *you*." I think to get an accurate tell of most of their shows' popularity, you'd have to correct for a lot of remote control loss -- and probably some plain old weed-and-Doritos-induced lack-of-inertia.

I couldn't make it through the entire first episde. I'm surprised that it's still on. Would it even capture the attention of teen guys?

I'm disappointed that Comedy Central is catering to 12 year olds.

I'd rather watch Peep Show, it's still has a white male POV but it's a lot funnier (and funnier in an awful way) and they have subtle ways of critiquing that point of view too. The sixth season is online now!

Someone finally ports an Internet TV show to basic cable, and it's not <i>The Guild</i> but this pile o' crap?

Sounds like a cheap imitation of a fantasy life. Why not go out and get a life instead of living it through a sexist, racist, self-centered veil of masculinity?

I'm sorry but this is one of the best shows I have seen in a while. Not to be sexist but I understand why a woman would not like this show, this is a show that is not made to attrack all audiences.

But, what makes it the best show you've seen in a while? I know why I got bored with it--I could put up with a gimmicky 2nd person thing if there were an interesting story line, but there's not. Help me see why someone would like it.

This show is funny because its absurd and crude (it is right after South Park after all and South Park has done way worse things than anything in Secret Girlfriend). I can understand why a person might not find it funny but I can't believe some of you are so angered by it. Based on your comments and this article it sounds like you people are taking it seriously when it clearly isn't supposed to be.
And I really don't think its that bad on the "sexism" scale. It's just like any other show except "you" are the archetypal ladies man character like Barney in How I Met Your Mother or Joey in Friends.
Lastly where is this show racist? I've watched all the episodes more than once and the only thing I could possibly think of is that it implies that the Black neighbor has a large penis...which is a stereotype. But that wouldn't make the show racist...

i'm always just confused about how people like the above commenter(s) come to find themselves on the BITCH MAGAZINE website in the first place... like, did you get lost on the way to tucker max?

How is this show anything like South Park? South Park does have its sexist and misogynist moments, but it actually, you know, is funny and has a point?

I really wanted to like this show but agree, it's so effing boring. There is absolutely no character development. The least they could do for us is make the sex scenes exciting but those blow too...I give up.
Oh and one last thing, I don't care how tough you want to act Miss Belle, no women can REALLY be a hooker, call girl, prostitute without having some deep rooted emotional daddy issues.