See Barbarella do her thing in another Grrrl on Film Recommended Cult Classic! | Bitch Media

See Barbarella do her thing in another Grrrl on Film Recommended Cult Classic! 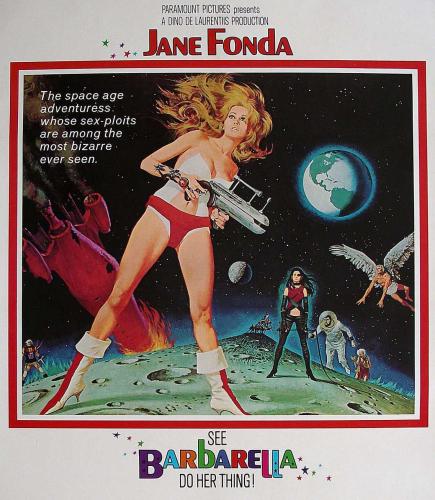 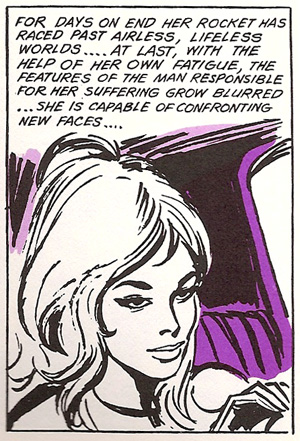 The opening title sequence features the five-star, double-rated astronavigatrix performing a zero-gravity striptease while a groovy Tom Jones-esque theme song proclaims her to be “wild, and wonderful.”

As our 41st Century solo spacewoman turns on the gravity and falls to the floor of her mustard-colored shag carpet-lined ship she receives a transmission from the President of Earth. Though she’s still quite nude, and offers to slip something on, the President insists (with surprisingly little irony) that it’s not necessary for her to trouble herself – his message is a matter of state. She must track down the rogue mad scientist, Durand Durand, in the Tau Ceti system. Durand Durand has created a weapon – the positronic ray – which is a threat to centuries of pacification. Barbarella accepts her mission.

When her ship Alpha 7 crash lands at her destination, Barbarella is rescued by a hirsute man from a group of children with flesh-eating robots. Thanking him for his aid, she asks if there is anything she can do for him.

Mark Hand: Well, you could let me… make love to you.

Barbarella: “Make love”, did you say?

Barbarella: What do you mean? You don’t even know my psychocardiogram!

Barbarella: Well, on Earth, for centuries, people haven’t made love unless their psychocardiogram readings were in perfect confluence.

It seems modern sex on Earth involves a pill and some hand-holding. It also doesn’t last very long. Apparently, this was a solution to what was both a distraction and a danger to maximum efficiency. But Mark Hand is interested in doing things the old fashioned way. By the time they’re finished Barbarella is too. She’s enlightened, awakened, and more than a little distracted. 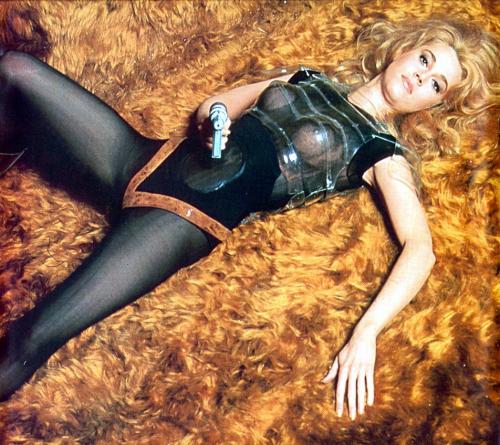 Throughout the movie, Barbarella also makes love to a gorgeous, blind, angel and has boring, sterile Earth-style sex with a resistance fighter. Her garments are minimal and revealing (though so are everyone’s) and get torn as much as James T. Kirk’s Star Fleet uniform.

But no worries, there appears to be no shortage of go-go boots in space. 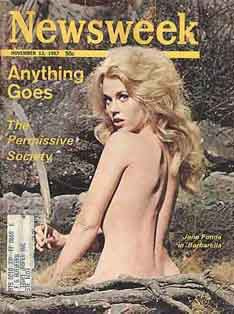 Durand Durand, who has been serving as concierge to the Queen since he went MIA, attempts to torture Barbarella with the Excessive Machine – essentially an Orgasmatron – that undresses and caresses her as he plays the machine like some S&M pipe organ meant to pleasure her to death.

Obviously this is problematic.

This is the only time in the film where Barbarella is forced into a sexual encounter. On the other hand, her sexuality and capacity for pleasure break the machine by exhausting its power (to which Durand Durand exclaims “What kind of girl are you!?! Have you no shame!?!?” – As we know, good girls aren’t supposed to enjoy sex so much.) Is this perhaps a commentary on women’s sexual liberation? If so, is it for or against it?

Is Barbarella nothing more than a bimbo sex object? Or is she a self-confident, sex-positive role model? Does Fonda’s self-identification as a feminist and activist influence or change your interpretation of the character? Does the camp approach and/or the cultural context in which it was made excuse its objectification of our hero? Considering that the original movie was made during the sexual revolution, how do you think the timing of a repeatedly rumored remake could be appropriate? Will a new Barbarella be kick-ass or bass ackwards? Who would you choose to direct and star?

Barbarella is a movie that I've always wondered about as I flip past it on late night tv. I will definately watch it now! I think the social context in which the movie was made absolutely alters its intentions. Jane Fonda's self identification as a feminist absolutly alters the way in which I view both the movie and her character specifically. I will keep these things in mind when I watch it soon.

I love these posts! Thanks so much!

I really am curious to know what people think!

I'm delighted to see you mention it; I like to recommend this film just because it's campy and bizarre. While I'm not a big drinker, I advise against watching it sober (or without friends to mock it with you,) because then it can go from so-bad-it's-good to so-bad-it's-just-bad.
As for feminist content, though... if the film has any sort of message, I think it's to root for Barbarella's liberation. She gets what she wants by having sex (very Sex and the Single Girl) but also wants to do it for the sake of her own pleasure. A feminist sentiment indeed, though it's hard to imagine that anyone, Fonda included, saw this film as a political message.
And personally, I think a remake would be disastrous, probably the worse one we've seen since Cruel Intentions. A huge part of the film is the authentic 60s decor, hair, etc. and the less-than-stellar (ha!) special effects.