So, Selena Roberts' Alex Rodriguez book, A-rod: The Many Lives of Alex Rodriguez, hit the shelves yesterday—earlier than its original release date, due to the jib-jab ratcheted up by the recent reportage on leaked bits of the book. I would be remiss in not mentioning A-rod, but, really…I don't want to read it. God, please don't make me read it.

I don't want to read A-rod because it sounds like a pretty crappy book. A crappy book, in fact, about an unlikable person who seems to have no redeeming qualities, who plays for a team despised by 99.9 % of the population—fun!
I didn't want the book to be bad. I wanted it to be great, and in fact for a while I predicted it would be, given the pedigree of its author, Selena Roberts, a former New York Times sportswriter, underneath whose byline always sat inches and inches of insightful, interesting sports coverage. One of the few female sports writers to make it really big, Roberts was always well known—especially after her unpopular but important coverage of the Duke Lacrosse Team rape case (which is a whole other blog post, lemme tell ya).

When she made the jump to Sports Illustrated, she got even bigger, especially when her tenacious reporting dug up some of the goods on Rodriguez. A February 7 si.com report revealed that Roberts and fellow SI writer David Epstein had discovered A-Rod was named in a major league baseball report as a player who had tested positive for steroids in the past. The findings, as a February 10 New York Observer story put it, were "Sports Illustrated's biggest story since it told the world that Pete Rose had a gambling problem."

The Observer bit also noted how Roberts' reporting prowess transformed a more puffy piece into one of the biggest scoops of the century:

The piece [initially] …was to revisit whether [Rodriguez] actually fit in as a Yankee, and go over the last two seasons in which Mr. Rodriguez has been romantically linked to a stripper, subsequently divorced, and then linked, romantically again, to super-cougar Madonna…
There was plenty of material for a write-around. But as Ms. Roberts dug deeper into the story, she started hearing more and more credible information about Mr. Rodriguez's use of steroids. And so a magazine piece that anyone could have written became, because of careful reporting, a nice, sharp, clean news break."

That's why it's such a sad shock that A-rod is filled with third party accounts and anonymous sources and serious speculations that, while based on pretty convincing circumstantial evidence, are still merely just speculation. When Roberts portrays Rodriguez as a corrupt individual, a high school 'roid user, a liar, and a reprehensible jerk who tried to jack his own stats by tipping pitches to opposing teams' players, hoping they would do the same for him, it's easy to believe. But there's really no proof. Sans a named source, it's all air. And in this case, it's pretty heavily charged air: High school 'roids? Lying about when you used performance enhancing drugs? Tipping pitches? That's some big deal shit—so you better be able to prove it. And Roberts can't, at least not publicly.

So the publication of her book has triggered a public backlash so violent it's beginning to get scary. And this is where her status as one of the few major female sports writers comes in, because some of that reaction has been pointedly misogynistic (other aspects of it indirectly so). The comments section of blog after blog, report after report, story after story, rip Roberts book, which is fair enough, but then go on to say things like this:

"Roberts is a hack. She "reports" conclusions she has drawn based upon ancient speculation. That she and ARod should now be forever joined is sweet irony. Put me down for $50- she and ARod will sleep together in 2011."—"rimkus," SportsIllustrated.cnn.com

"Why does this woman, Selena Roberts continues to make allegations against Alex Rodriguez? He needs to sue her for every penny that earns. It is like she is obsessed with him as if you denied her an interview and rejected her advances."—"ajmoore," SportsIllustrated.cnn.com

Over at Deadspin.com, one commenter called Roberts "Bitch face," a reference to how Rodriguez's teammates called him "Bitch Tits" because of his enlarged, 'roid-y chest.

Yes, it's all just kind of…icky.

That's not to say the debate over the book hasn't produced some thought-provoking, more mature content. As far as blog posts and comments about Roberts and her book go, this one is actually pretty even-handed, albeit still with a touch of anger:
http://bleacherreport.com/articles/167444-selena-roberts-wheres-a-bus-wh...

And, y'know, in researching all this, it occurs to me maybe revisiting Roberts' coverage of the Duke rape case might be in order. Stay tuned for Selena Roberts, Part II.

Great article. When's part two coming out? I'd be really interested in reading your take on Roberts' role in the Duke lacrosse case. 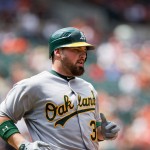 by Britni de la Cretaz
Baseball hasn’t gotten the memo about the seriousness of domestic violence.