The pile of great new comics next to my bed has gotten dangerously high. It’s seriously teetering and about to collapse on the cereal bowl that I should have moved days ago. The problem is that artists and small publishing houses have put out a bunch of excellent comics in the past few months—here are seven of my recent favorites that focus on female protagonists or deal with queer and feminist themes. 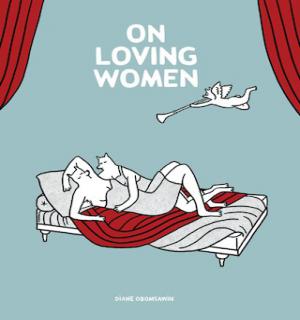 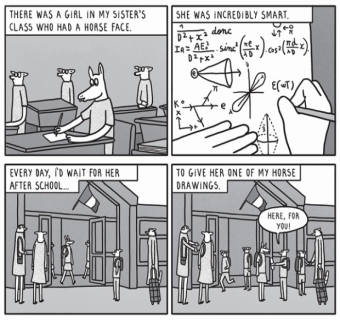 What a beautiful comic.  I wasn’t familiar with Diane Obomsawin’s work before picking up this book—she is a filmmaker and illustrator whose work is primarily in French—so devouring this collection of comics about profound sexual experiences in the lives of women who love women was a surprise and a delight. Obomsawin based each chapter on interviews with real-life friends, but depicts her characters as adorable critters that look vaguely like elk, deer, and bunnies. The stories vary in their tenor, ranging from an engaging romp involving sex and LSD in Greece to the moving recollections of a woman whose mother made her change schools when she fell in love with a girl. In the sweetest story of the book, two girls hold hands all night in their nun-run Catholic school dorm. “It hit me like a thunderbolt,” recalls the narrator. “There were big windows and they were wide open. It was late June. We sat on the radiator and looked outside. We held hands and talked until the sun came up.” 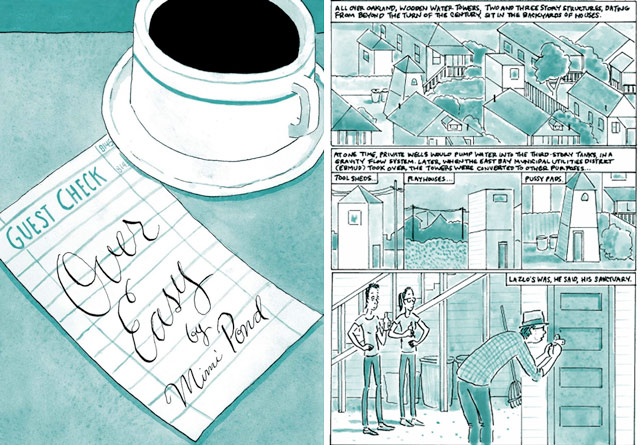 Mimi Pond is one of the most influential cartoonists who people under 30 have never heard of. Pond wrote for Peewee’s Playhouse, penned the pilot of The Simpsons, and published comics in the Village Voice, then stepped back from public life to raise her kids. People who discover her immense humor and insight for the first time (as I did) in her new graphic novel memoir Over Easy are in for a jolt. Pond dishes up a memoir that’s light on the nostalgia and heavy on the humor as she chronicles her time as an awkward art-student-turned-diner-waitress in 1970s Oakland. The book feels like an honest time capsule from a city and era that don’t exist anymore. Pond starts off idolizing the glamorous waitresses at her local diner, but she’s very clear that this is not American Hustle: these are the kids who made art, made their own clothes, made lots of omelets for hung-over club-goers, and never got rich. Her illustrated anecdotes about sexually liberated wait-staff mingling with pretentious punks serve as a sincere ode to the maligned city and decade. I wolfed it down and wished for a second course. 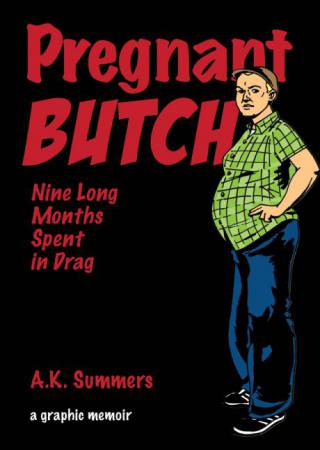 Pregnant Butch is a refreshing counterpoint to the pregnancy tales that glamorize the experience of giving birth. From beginning to end, A.K. Summers’ graphic memoir is full of the nasty stuff: the sweat, the self-doubt, the unexpected bodily fluids. When Summers’ main character finally gives birth after what she feels is an eternity of hauling her unfamiliar, growing load all over town, she doesn’t greet the painful birth with rainbows and jubilation. Instead, she has a hilariously honest thought: “I’d like to die. But I don’t see how I could arrange it.” In the introduction, Summers addresses the question of why the comic’s tone is so negative: “I knew other butches were [getting pregnant], but I wasn’t hearing their stories—at least not in the raw, personal argot that I was hankering for. Come on! I want to hear the negative! The dirt! The account you hear over a beer at the end of the night!” Summers’ sharp, lo-fi style is a good match for her nitty-gritty storytelling and she’s right—the dirt is exactly what makes this comic compelling. 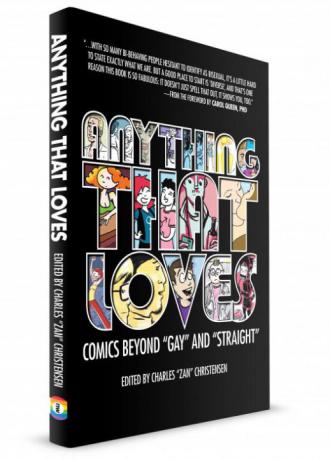 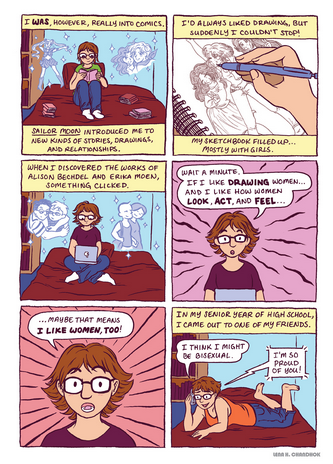 Ed. Charles “Zan” Christensen (the page featured above is by Lena Chandhok)

This collection of “comics beyond ‘gay’ and ‘straight’” feels like a charming best-of–Tumblr anthology of 36 artists.  The mostly nonfiction stories run a few pages each and though they run the gamut of illustration styles, the comics are high-quality, professional work and each approaches tricky issues of sexuality with a chatty and personable perspective. It’s an upbeat book, through and through, as it winds from Kate Leth’s educational lessons on bisexuality to lusty personal ads illustrated by Ellen Forney to Leia Weathington’s saucy tale of an adventuring queer heroine named Bold Riley. Because of its empowering bent, approachable styles, and focus on self-exploration beyond well-known labels, Anything that Loves is a collection that I’d be excited to hand off to a teenager who’s hungry for media that reflects how confusing gender and sexual identity can be. 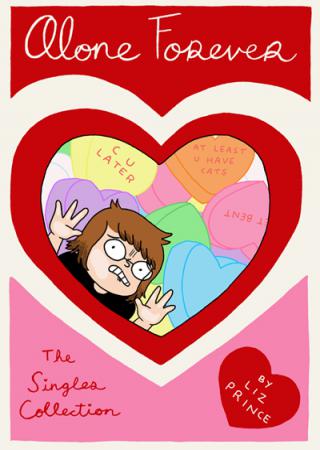 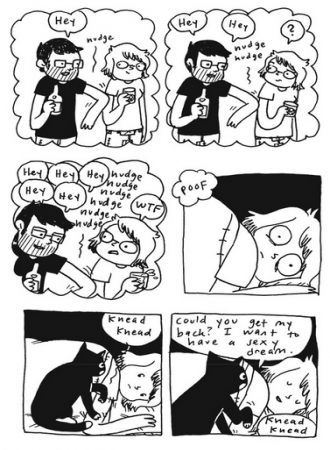 Here are stories for anyone who is miserably single. Liz Prince’s Alone Forever is a small collection of self-deprecating jokes that almost all end with a punch line zinging with suppressed rage or awkward rejection. Prince’s simple portraits and distinctive zinester style capture the conflicting realities of dating as she alternately undermines her attempts to flirt with cute bearded punks and gets disgusted with her desire for attention from OKCupid matches that she doesn’t even really like. If there are any heroes here, they’re Prince’s cats: lovingly drawn furballs who reliably show up to keep the artist company during her loneliest hours. 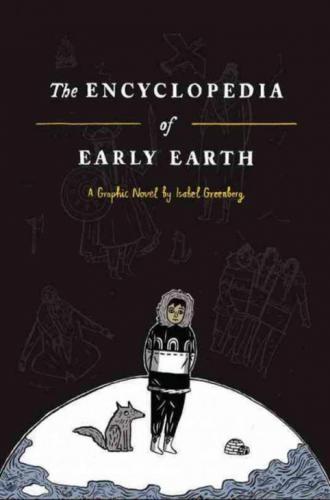 The Encyclopedia of Early Earth

Isabel Greenberg’s first graphic novel is a gorgeous epic that has rightly received piles of praise. The novel centers on a young storyteller from the frozen land of Nord who loses part of his soul and has to kayak around the world to find it, stopping in at increasingly fantastical seaports and engaging in all sorts of adventures. The Encyclopedia of Early Earth is a triumph of imagination and illustration, but it’s also just very funny, with the story taking unexpected turns that build around whimsical heroes and villains who feel like complex Hayao Miyazaki characters. I cracked open the book while wedged into a center seat on a plane trip, lingering over the beautiful ink-and-wash frames filled with foxes, whales, and foreign cities. Before long, I noticed that my seatmates on either side of me were reading over my shoulder. I wound up passing the book back-and-forth with the strangers—it received rave reviews all around. 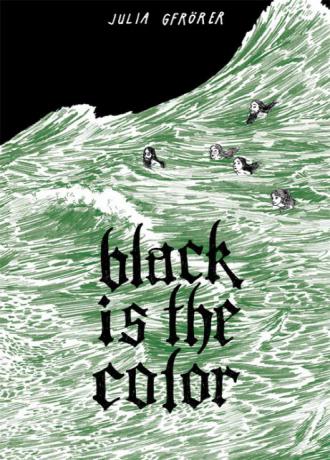 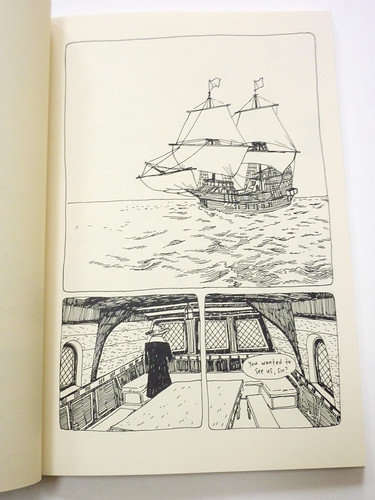 Black is the Color

This comic is unlike all the others. With her spare, spooky pen-and-inks, Julia Gfrörer tells a darkly funny story of a sailor abandoned at sea who becomes entwined with a gaggle of snarky mermaids. The mermaids are an apathetic bunch, rolling their eyes at the ongoing misery of men and bobbing in the waves to watch a horrific shipwreck as if it were a sappy made-for-TV movie. Black is the Color is a surreal tale, but the details of the grand ship and the characters’ raggedy clothes are clean and precise—Gfrörer’s meticulous linework builds a highly intentional fairy tale that pulls you deeper and deeper into its morbid clutches.

so amazing! I love that Bitch helps connect me with other great things to read. y'all seriously are incredible. 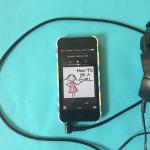