Sex and the City Gets a Sequel | Bitch Media

Sex and the City Gets a Sequel

At the end of last week, New Line Cinema made it official: a sequel to Sex and the City
is on the way.  Although no script has been developed yet, Sarah
Jessica Parker, Kim Cattrall, Cynthia Nixon and Kristin Davis have all
signed on for the film, and Michael Patrick King is back to write and
direct.

The sequel is further confirmation that studios are
really starting to bank on the box office power of women audiences, yet
I know many people have mixed feelings about the success of the first
film. Ready yourself now for a fairly endless amount of speculation and
would-be spoilers as the film moves closer to shooting, but in the
meantime, I’d like to hear your take on it…

Feminist response to the first Sex and the City film ranged from escapist pleasure to guilty enjoyment to searing hatred. I
have a hard time thinking of any film that inspired the same range of
response and emotions among women over the past few years.  So now that
Sex and the City 2 is a done deal, let’s talk about it.

What are your
hopes for the sequel?  And what impact do you think it will have on
films made for and about women?

I thought the series was good, because it portrayed women talking about sex in a frank, realistic way. Of course, that has been happening in some circles for years, but to acknowledge that a group of seemingly-on-the-up-and-up (i.e. Rich & White) hetero women talk about sex thus was a big deal for the MSM.

But by the time the movie rolled around, I was over it. Yes, we all have vibrators and many sex partners. Fine. So I thought the movie wasn't as ground-breaking (again, in the MSM way) as the series. Here are a few of my probs with the first movie:

Samantha can't stay sexually faithful so she...<i>breaks up with Smith?</i> Why not open your relationship and get the fuck over monogamy? That's titillating and new...and happening everywhere, dumb MSM!

Carrie gets dicked about by Big AGAIN. And how he comes back to her is by cutting and pasting love letters on email? That's enough to salve the embarrassment, huh? Why the fuck is she going for that old bastard - because he can afford to give her a huge enough closet to fuck in, next to Holy Grail Manolos? PUKE.

Finally, the whole sitch with Miranda and Steve was so dull and unimaginative. Miranda keeps getting shunted in the Shrill, Bitchy Lady corner and it's boring and unfair. I know far more Mirandas than Carries or Charlottes, personally. Back to the story line. You know what - you can't have sexless monogamy! It's problematical for couples. There is so much they could have worked with there - but it turned into a dull meme on couples counseling and New Beginnings.

So if I'm on an airplane and the sequel is available, maybe I'll watch it. But the reviews better indicate a deeper level of juiciness and complexity in order for me to grab a gaggle of girlfriends and make it a Theater Date Event.

I'm not entirely sure who the audience is for SATC, but I am confident that I am not it. I found nothing redeeming about the show or the film, though the film was worse than the show for sure. Even on an aesthetic level, there was absolutely nothing interesting about it. And the only reason they're making another one is because the first one brought in a ton of money. So, I say feminists who aren't fans of SATC save their own $$ during this time of economic crisis and spend it on something that you actually need instead of on something that simply reinforces the world that these women live in, which to my mind is a world that I find highly offensive to my feminist sensibilities.

And if you MUST watch it, find it for free on the Interweb.

I'm excited about the sequel. I didn't have high hopes for the first film, but it exceeded my expectations in every way. The longer format allowed the characters to get a little deeper, and the story to get a little darker. Sure, Carrie and Big are always kind of confounding, but the film put female friendship front and center in Carrie's life, pre- and post-marriage.
My own fandom aside, I'm dismayed by the widespread conviction in the feminist community that we should simply avoid things that are likely to offend us. How useful is feminist criticism if we refuse to engage with the problematic?

<i>"How useful is feminist criticism if we refuse to engage with the problematic?"</i>

I agree. I think of it as knowing one's enemy.

You can take the position that it's demoralizing personally to be saturated in lousy messages, sure. But I'd rather know what the backstory is on any particular New Thing so if I feel like launching off a rant, I'm equipped for a full-service argument.

I believe we've got to dig in there and be a part of popular culture, if only to be able to speak intelligently about what is often unintelligent or downright offensive. That's what makes Bitch one of the best magazines to land in my mailbox.

We're in an era now where being meta about everything is an acceptable, and welcomed, pov. People are sophisticated about media and like to be able to parse through these shoddy offerings with high-brow reviews. It's delicious and funny and gets more conversations started than the on-off "I'm Offended" stance does.

I'm hoping that SATC II moves into something different besides making one's relationship life prosper. That's worn out and the characters are at an age where lots of other avenues are opening up for analysis. I'm doubting they'll explore the financial downturn - it's an escapist film for some - and the sponsors aren't folks who tend to approve of belt-tightening, I'm guessing.

I must admit, I was not at all excited for the SATC movie. When the series first came out, I loved it: intelligent, multi-dimensional (although, sadly, not ethnically diverse), goal - oriented women are able to discuss sex frankly, experiment with sex and make their own decisions regarding their sex lives, their careers and their well - being. But after more than a couple years I became bored. Does every episode need to revolve around how these women feel incomplete without a man (sex and/or love) in their lives?

Although I thought the writing still good (and especially enjoyed Smith's character, the sober, younger man in Samantha's life) I stopped watching. When the film came out I was not interested. I happened to watch it on dvd a couple months ago and was very pleasantly surprised...here's why (spoiler alert!): I thought they provided a nice antidote to the fairytale, happily ever after slop usually peddled in MSM films.

Yes, Carrie ends up with her man at the end. But she realises along the way that the big society OTT wedding doesn't equal happiness. A nice alternative to the vulgar super - wedding - mentality currently mass marketed by the MSM. Carrie and Big only get back together at the end of the film because they realise their relationship/marriage is more important than the wedding day. A fairy tale ending with a twist.

I enjoyed Samantha's break up with Smith. I was delighted to see (for once!) a woman struggle with monogamy and decide it wasn't for her. I thought it was very sensitively dealt with and ground breaking as usually only men are allowed to find monogamy unpaletteable in the MSM. I also enjoyed how this storyline explored a woman losing herself in a relationship/man and regretting it. No fairy tale ending here in the traditional sense but the woman makes the right decision for herself, and takes responsiblity for her own happiness, hurray!

I also thought the relationship portrayed between Miranda and Steve was very well written. No happily ever after here but the very real truth that juggling professional careers with being a parent leaves you exhausted at the end of the day. Maintaining a happy relationship with your partner takes hard WORK. Although Miranda and Steve end up getting back together I thought this storyline did a good job in showing how life isn't all bliss post wedding. I like Steve's character but I would prefer to see Miranda as a single mother and coping just fine.

Aside from those pleasant surprises the best thing about SATC The Movie was Jennifer Hudson. The screen absolutely lit up when she was on it. I was only sad her character didn't get more screen time and her storyline finished when she left NYC to go get hitched of all things - I hope she (and husband) return to the Big Apple.

I don't even need to now that I've read this entry's comments! And I don't think I'll want to watch the 2nd one either. Unless people think it's great, maybe, and it's on BitTorrent.

About Samantha, the first commenter said the most innovative and interesting way to go would be to have an open relationship--but as the last commenter implied, open/multiple relationships are still committed relationships, if in nontraditional ways. I am way glad to read that Samantha preferred her independence. I remember watching the episode where she reluctantly became Smith's romantic partner because he insisted so, when she had cancer. I can identify in a way -- I get clingy or needy in my relationships when I'm depressed, but when I feel happy I'm just fine on my own with my friends! Hah.

Anyway, I am happy about Samantha's choice. I think it transcends the value of the open relationship option as it relates to her character.

And I'm glad they got a black woman in there. All white, hetero women = boring. Now gimme some Latina lesbians, goddamnit. And a bi Japanese woman. And make them all stroll down Broadway in Manolos and their underwear. Just kidding.

About Big (what is it with these stupid-ass names?) I can't believe Carrie gets dicked around AGAIN. WTF. What is his appeal, indeed? I don't see it. And I think Carrie's character is rather pathetic--she giggles and looks at her feet when she flirts, lets men take the fucking lead. And this asshole! She puts up with this asshole? Again? Jezeus. Thanks for the message that if Carrie--a successful, purportedly good-looking, etc etc woman--will put up with her partner's shit, then we all should! Who are we to complain when we don't have $40K to spare on shoes? Fucktards.

The show was excellent. Edgy, sexy, and full of what makes living in New York great.

What Michael Patrick King doesn't know how to do is (1) end a series or (2) write a good movie script. Why did the series end with Carrie messing around in Paris, and why did the move not showcase life in NYC?

Oh well. I saw the movie, but I'm sure to be disappointed again with the over the top materialism and "out of NYC" story-lines...

Relevant: Wonder Woman and the Double Binds of the First Female President 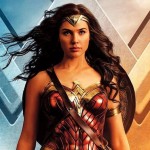 by Vanessa Garcia
In an early storyline from the ’40s, Wonder Woman becomes president in the year 3000. We can't wait that long.