Sex and the Fat Girl: Behind Closed Doors | Bitch Media

Sex and the Fat Girl: Behind Closed Doors

I recently noticed that two commenters on my “Too Fat to F*ck” post expressed dismay at the idea of seeing ANYONE displaying sexual affection in public, not just fat people. I want to address this because that was not the point of the post. When I talk about bringing fat sexuality out in the open, I’m not talking about encouraging fat people to go have sex in a crowded parking lot. However fun that might be, it’s not really effecting change to just have mass displays of public fat sex. I’m talking about not excluding fat people’s sexuality in discussions about and representations of human sexuality. I’m saying the sexuality of fat people should neither be reviled nor ignored.

You can’t say that the media doesn’t sell us sex and sexuality 24/7. We’re exposed to it in every form of pop culture. In the post I previously referenced I mentioned the show “Mike and Molly” and Marie Claire columnist Maura Kelly’s disgust over the show’s display of two fat people kissing. Positive representations of fat sexuality are few and far between in the media, and when we try to include them, we get responses like Ms. Kelly’s. Talking openly and often about fat sex destigmatizes it and opposes the idea that fat sexuality either does not exist or is disgusting as compared to the sexuality of “normal weight” people. It’s confrontational, and a form of resistance. In that sense I think it’s more important to promote the display of fat sexuality—maybe not buck naked in public, but at least in our media. We need to get to the point where seeing fat people kissing is not cause for alarm.

Just as queer folks fight for their right to express their particular sexuality, fat folks need to fight to not have their sexuality erased by the dehumanization fat people are subject to on a daily basis. This is more than bombarding the world with excessive PDA. Demanding equal representation in discussions and displays of popular sexuality is one of the keys to fat acceptance and body love.

I agree, completely. Time to take it - respectfully, lovingly, and humanly - out of the closet.

I agree also. Having been a "big girl" I know that being very large makes you feel inhuman at times. This is usually due to the way people treat the overweight and obese through stares, jokes, scorn, insults and apathy. However, being big doesn't mean you cannot be beautiful, sexy and nor does it automatically denote that sex is 1) impossible, or 2) discusting when you do have it. Love is beautiful and expressing that love should make not only those who are feeling it happy but also the onlookers who witness it. Love is everywhere - even king sized beds. ;)

For once, I would like to see a sensual scene in a movie with a woman who has a tummy and love handles. For years I've felt incredibly self-conscious about my stomach and hips and to this day am too afraid to wear a bikini. A large part of it has to do with the fact that the only bikini-clad women I see in various forms of media have flat, washboard abs that I will never, ever have. And every time I watch a lovemaking scene where the woman is half naked I always cringe when I think about my own belly and hips, which will never be as smooth and toned as the actress's. Thankfully I've recently to accept my body as it is, and I'm a lot happier for it. In fact, I think I have a damn nice body, big belly and love handles in all. So yes, I am all for the representation of different body types as both sensual and beautiful!

I definitely agree with this. I never thought about it much until I read a poem called "Lovers," written by Tatjana Gromaca and translated from Croatian by Mario Susko. This poem begins, "A fat man and a fat woman kiss in the supermarket..." and describes their relationship, with 2 things at the forefront: their size and their love. It's a beautiful poem that describes a relationship between two people who are completely devoted to each other and this devotion blinds them from imperfections. We need representations of people like this in American culture; after all, our culture as is stands right now represents a very small majority of people (skinny, white, upper middle class, heterosexual, etc.). Americans need to demand a change. 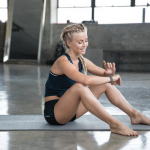