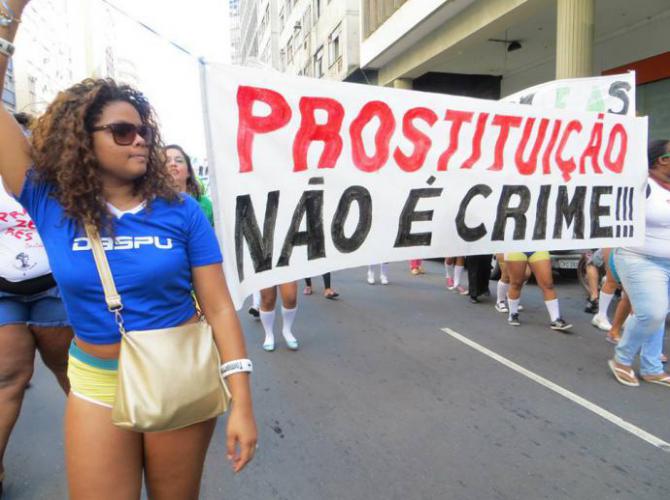 Sex workers and their political allies marched in Niterói, Brazil leading up the World Cup. Photo from Daspu’s Facebook.

While a FIFA fan fest raged in Rio de Janeiro’s ritzy Copacabana neighborhood last week, a few blocks away Brazilian sex workers were having their own party. Sex workers and their political allies wore shirts designed to look like soccer jerseys, silkscreened with phrases like “Vai Ter Copula”—a pun on the protest phrase “Nao Vai Ter Copa” (“There Will be No World Cup”) that translates to “There Will Be Sex.”

Sex workers have occupied a unique place in the protests and festivities around the World Cup. Sex work is legal in Brazil, where sex workers even qualify for social security benefits, as is sex tourism. But the government cracked down on the industry leading up to the World Cup. On May 26, just before the start of the games, police  raided an apartment building in downtown Niterói and arrested over 100 people—sex workers say their money was confiscated and several people reported being beaten or forced to perform oral sex on police. In response, sex workers and their allies took to the streets in protest, even playing a game of semi-naked soccer outside Niterói’s municipal building. 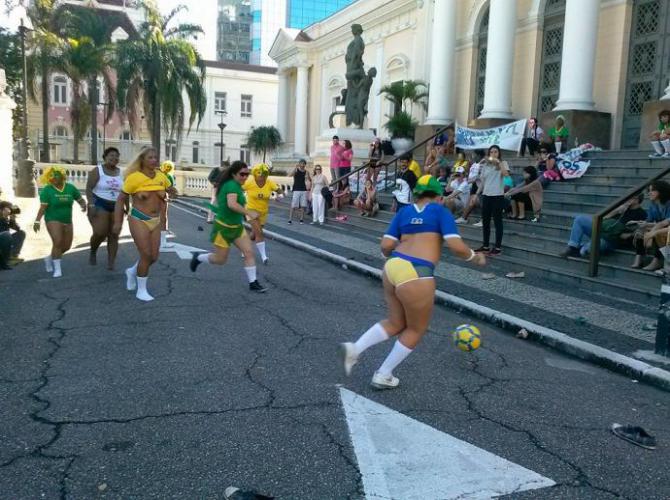 A protest soccer game takes over the streets of Niteroi. Photo from Daspu’s Facebook.

Brazilians feared that the thousands of fans pouring into the country during the World Cup would lead to an increase in child prostitution—especially in areas where new stadiums are being constructed. That is certainly a concern. But sex workers who are of legal age argue that the World Cup can bring them much-needed income. It’s estimated that close to one million people work in the sex trade across Brazil and sex tourism is indeed a big industry. In 2013, The Prostitutes’ Association of Minas Gerais launched a campaign to offer free English classes to about 80,000 sex workers so that they could better negotiate their services with the thousands of tourists arriving to attend games in the state’s capital city, Belo Horizonte.  About 600,000 tourists are planning to come to Brazil for the World Cup, of which 400,000 will be in Rio de Janeiro. Sex workers asked if everyone can profit off all of these tourists, why can’t they?

The t-shirt party in Rio on June 26 was hosted by Brazilian fashion line Daspu—an abbreviation of “de las putas” (which loosely translates into “of the sluts”) that sex workers founded in 2005 to bring visibility and sustainability to their political work. One shirt made to look like a special edition World Cup jersey read “Zona Padrão FIFA.” It translates to “FIFA Standard Zone” and makes reference to Brazilians’ massive opposition to the exorbitant spending of the World Cup. As the government spent more than $11 billion dollars to build stadiums and other infrastructure in line with FIFA’s standards, Brazilians started demanding FIFA-standard schools, FIFA-standard hospitals and FIFA-standard housing. For sex workers, the demand is for FIFA-standard work zones. 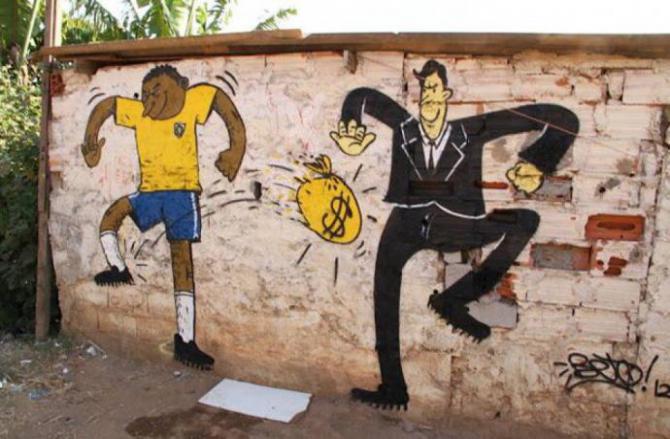 Artists have covered Brazillian with graffiti that criticizes government spending on the World Cup. Via Street Art Utopia.

At the party, trans activist Indianara Siqueira was sporting a shirt with a portrait of Gabriela Leite, a famous Brazilian sex workers rights activist who recently passed away.

“They say they are fighting against exploitation of women, but we as prostitutes see [their struggle against sex tourism] differently,” said Siqueira.  “We are against the displacement caused by the World Cup and all the money that went to it, instead of financing health, education and public transit in Brazil. That part is not cool. But sex tourism that brings us money, that’s cool.”

This year on June 2, Puta Dei or National Day of Sex Workers Rights, Daspu and sex worker organization Davida took to the streets with a catwalk in which their sported their World Cup jerseys in defense of their rights.

“This year we focused on this idea of the right to work as a sex worker during the World Cup because there has been lots of repression around prostitution, bars being closed, violence and hundreds of sex workers without a place to work in Niterói,” said sex work researcher and documentarian Laura Murray, at the Daspu party. In addition to the raid in Niteroi, police also closed down Copacabana’s Balcony Bar, a popular destination for foreign tourists to meet local prostitutes, mere hours before the kickoff game of the World Cup on June 12. While sex work is legal in Brazil, the government is clearly trying to discourage sex tourism. Before the games, Brazilian president Dilma Rouseff tweeted, “Brazil is happy to welcome tourists who arrive for the World Cup but also ready to combat sexual tourism.”

While the World Cup comes into an end and it is uncertain if Argentina, Germany, or the Netherlands will triumph, it’s a sure bet that Brazil’s sex workers will continue to exercise their legal rights and cash in on the games.

Andalusia Knoll is a freelance journalist originally hailing from New York City, currently based in Mexico City who travelled to Brazil to cover social issues surrounding the World Cup.  She is a regular contributor to VICE News, Free Speech Radio News, Truthout and Democracy Now! Manoella Barbosa assisted with translations for this article.