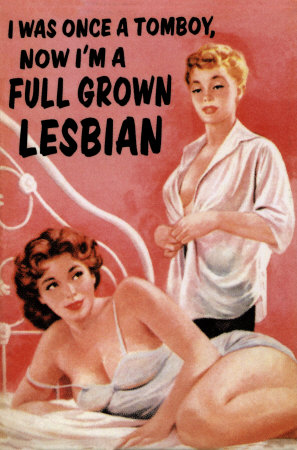 Along with hot pink and oversize handbags, women's magazines are pushing a new trend this season: lesbianism. At least, that is the impression given by this article in this month's O Magazine (featured also today on CNN.com).

The article, entitled "Why Women Are Leaving Men For Other Women," deals with well, exactly what it sounds like it would deal with. While it's a great thing that a mainstream magazine like O is apparently making an effort to normalize same-sex relationships, it's hard not to feel a little weird about the way the author (Mary A. Fischer) treats lesbianism and sexual fluidity as a fun, sexy, new trend that is all the rage this season. (What's next? Flashy new mood rings that change color based on your gender identity?)

To be fair, the O article does seem to have its heart in the right place. It features several different same-sex couples (complete with precious photos) and interviews them about how they got together. Of course, all of the couples include at least one woman who formerly identified as heterosexual (and may still), and these women explain why it was that they chose to start batting for the other team, so to speak. For the most part, their reasoning stems from emotional fulfillment, and the fact that they weren't getting it from their male partners. Could it be that the hypermasculinization of American males is rendering them unfit for heterosexual relationships? Has our culture become so gendered that our only chance at happiness lies in homosexuality?

These and many other questions arise when confronted with a so-called "phenomenon" like women leaving men to be with women, and the problem with the article is that it doesn't really ask them. For example, Fischer treats this as a new happening among women in the US, and doesn't touch on the fact that it is most likely that the desire among women to have homosexual relationships hasn't changed, the culture has. Being in a same-sex relationship is slightly less taboo now (for some people, in some areas of the country), so more people are doing it. It's not as though women who had never given a thought to homosexuality are suddenly changing their minds because Cynthia Nixon has a girlfriend, or because Katy Perry sang a song about kissing a girl. Why the shift in cultural acceptance?

A better question to ask might be, Has there even been a shift in cultural acceptance? Of the 24 comments left on the O website, many of them are hateful. Says memymine, "It's perversion to what God intended and I feel sorry for the children." Rossjw adds, "Ok Oprah, as a black man I am disgusted by this story. Our community is failing and fallen behind because of I don't need a man mentallity that you foster." Sure, television shows cited in the article like The L Word and Work Out put lesbians into the mainstream, but it doesn't sound like everyone is quite as psyched about it as Oprah.

To be fair, media exposure that normalizes homosexuality/bisexuality/polysexuality seems like a good thing, especially in the wake of Prop 8 and other such nonsense. Trivializing sexuality and suggesting that it is changing because of Lindsay Lohan's foray into the LGBTQA community, however, seems a bit silly. (This is not to say that this mass media coverage is a bad thing, just that it is not responsible for a perceived nationwide shift in female sexuality.)

The article does at least point out that we know very little about female sexuality as compared to male sexuality from a scientific standpoint, and that many of the commonly held beliefs surrounding sexual orientation stem from scientific research conducted on exclusively male subjects. The studies that have been done more recently on women's sexual responses do show evidence of what O is coining, "sexual fluidity." (They cite the 2003 Northwestern study on this, among others.) Because of this fluidity, some women feel quite comfortable dating partners of more than one gender, without giving it much of a second thought.

More than shine a light on a new "fashionable" sexuality, Fischer's piece shines a light on all of the problems we as a society are still struggling with when it comes to gender and sexuality issues. If we could back off a little bit from the gender norms and rigid classifications, it might not be such an issue that an 8-year old girl has a genderqueer stepparent (something touched upon in the article). If we didn't encourage men to be emotionally distant (and straight), we might see more of this sexual fluidity in men as well. And if we didn't insist upon everyone identifying as either a man or a woman to begin with (and saddling themselves with whatever that implies culturally), we might be able to get past all of this weird "trendiness" rhetoric and just see these same-sex couples as what they are: couples.

I agree that it seems that sexual fluidity is becoming a trend, but there's always the fact that people are people. It's human to want to do what others are doing, even subconsciously. But then there's also that part of society, however small, that says if you're not queer, you don't belong. One example would be the numerous arguments over the Twilight trilogy (which I, personally, dislike) at many feminist blogs. I found many comments that accused Twilight fans of only being fans because they were straight and couldn't understand anything else. That's discrimination, for sure. So what if someone's straight? That's like saying that I only like Janet Jackson because I'm black, and if I were white I'd understand why nobody likes her. (which is not true.)

Why it's ok in this society to be a lesbian, but not a gay male, or even bisexual. Why is being a lesbian ok, but not if you're a gay male? Is it the idea/fantasy that lesbian couples could potentially participate in a threesome? Why is it hot when two women make out, but disgusting when two men do the same? Being gay is not a trend and I suspect (being straight) it's not really a choice either, as these 'shifters' make it seem. Perhaps these women knew all along they were gay or bisexual, and realized that it was now ok to 'bat for the other team'. I'm glad homosexuality is beginning to be a bit more widely accepted, but we've still got a long, long way to go.

That said, I've noticed that America seems to only like one group of people at a time. At first, we kinda decided blacks were ok, then it was women. Now we're struggling with kinds of blacks and women. We're ok with Jews, but we don't like Mexicans. We like rich people, but we don't like working-class people, not so much. We like macho and uber-feminine, but not gay. I find that we're slowly learning to like/accept different groups of people, but not all at once. They've got to 'prove' that they're alright to us, and essentially, "American." Who's 'us' anyway?

The argument that it is important to give homosexuals equal rights because it is not "a choice" is ridiculous. People should have equal rights because they are people. As a queer transguy, I can tell you that sexuality is fluid. Sometimes so is gender. It doesn't mean that fluidity and choice are intertwined. I think you are confusing the two. I understand that you are not coming from a place of malice, nor are you intending to be offensive. However, you are. That a woman could go through life and date men and be happy in that and then find a woman that she falls in love with does NOT mean that she was "secretly gay". It could, but if she was truly happy dating male identified people for her whole life and suddenly falls in love with a woman it much more likely is simply a situation wherein she fell in love with the person.
You write about people hating groups and being divisive, but that is exactly what you are doing. Stop dividing and categorizing people. Sexuality can be fluid in some people and static in others. Some of us love based on the individual person, not because of body parts or gender roles. I spent a long time hiding who I was because nobody wants to accept me into their grouping because I continually defy categorization. At this point in my life, I really am not interested in being part of anyone's category.

Also, I don't hate any particular group. It was merely a sarcastic, not-very-well-articulated statement that I've half-assedly noticed throughout the years. I also do not want to be in anyone's category as I tend not to fit in any fully. Nor do I want to put people into categories. Unfortunately, that's the way I was taught growing up and it's a hard habit to break. I try to look at people as individuals and love/like them for their own specific traits, not because they are black or tall or Mexican or rich or poor. I was not meaning to divide people; it is merely something I've seen many in society (especially government) do. Perhaps my second paragraph was irrelevant and misplaced. My intentions for that statement really had nothing to do with gender, sexuality or fluidity. Perhaps I should have just stuck to the topic at hand.

I do apologize. Malice or divisiveness was not my intent at all.

You are seriously bringing the Twilight argument up? I read all of the Twilight books (pre movie, which was TERRIBLE) and enjoyed them as escapist fiction. The gender roles are disturbing, but that aside, I still enjoyed them. I'm not straight, but I also don't understand the argument that someone would make that only straight people would enjoy them... because straight people are stupid somehow? That seems to be the argument being made. Do you have any other examples of this? I don't really think that if you can't think of other examples that this is a good one.
Being insulted in an argument online about a book is not the same as being discriminated against. The insult (and logic behind it) is so idiotic that it makes no real sense to be so offended.