Sherman Alexie: Thanksgiving is a Story of Survival | Bitch Media

Sherman Alexie: Thanksgiving is a Story of Survival 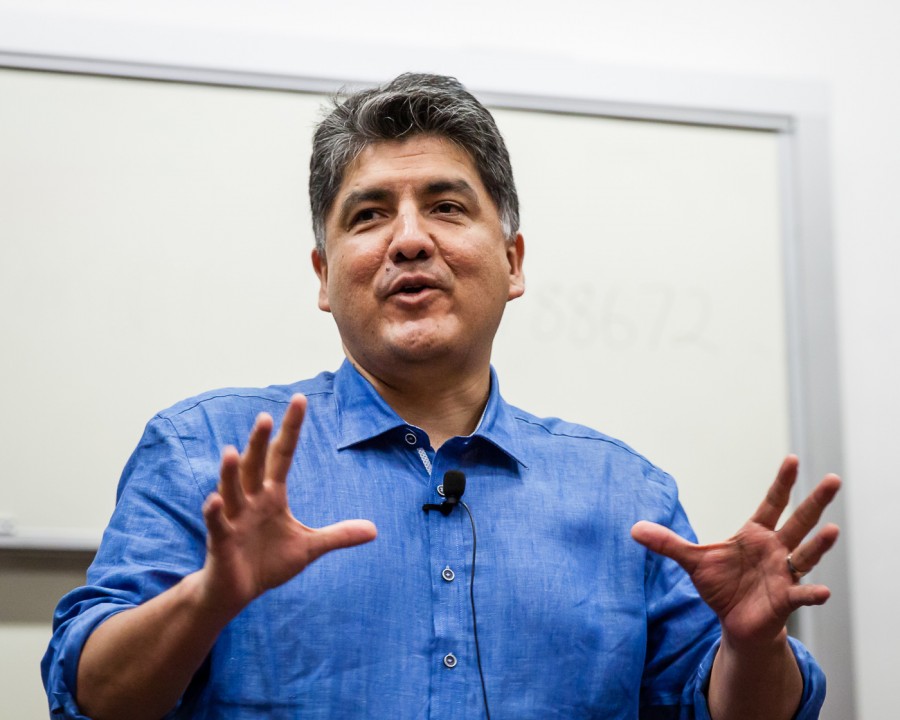 This interview was originally published on November 27, 2013.

How great would it be to share a dinner table with Sherman Alexie? The National Book Award winner, Spokane Coeur d’Alene Indian, and author of 24 books always has something smart to say, and his way of saying it is with a good-natured dark humor that illuminates the bad stuff of life with a warm and loving light.  A week before Thanksgiving, Sherman and I talked about the holiday and how he’s made it his own, imagining the traditional Thanksgiving feast as a celebration of survival.

This interview is part of our Subverting the Holidays podcast.

SARAH MIRK: Why don’t you like to go home for the holidays?

SHERMAN ALEXIE: Well, mine is fine, but I have so many friends who go home and then they’re just miserable until February, and I don’t understand why people want to go back into that.  Everybody knows our house is the place to go when you finally decide you don’t need to be miserable.

Are you personally miserable when you go back home to your family?

No, no, I just enjoyed having created a new holiday.

It’s random.  It’s random every year.  Generally speaking, it has been a brother-in-law or two in-between relationships.  It has been friends, recently divorced friends, friends on their way to divorce.  It’ has been abandoned Jesuits and abandoned lesbians.

Sounds like they’re maybe a tragic collection of people.

Yeah.  I remember one Thanksgiving with this very sad dude I never saw again.  He was a friend of a friend who picked up my kid’s xylophone and was playing it well and playing it sadly.

Ah, the sad xylophone of Thanksgiving.

Yeah, the sad xylophone of Thanksgiving.  He had a sad goatee, so if you looked at him, if you squinted your eyes, he looked like a pilgrim.

How do you think it changes Thanksgiving to having been with your friends rather than your family?

You choose.  It’s always better to choose.  I spoke at a college recently and I had talked about this, about not going home, about the difficulties of your birth families.  Very interesting, a young gay man said that he felt liberated as soon as he knew he didn’t have to go home, back to disapproving family members.  Another young woman cried because she said even though she felt like she didn’t belong or was accepted, she was going to still keep trying.  We’ve been told, it’s part of that family mythology.  We want to believe that myth of the American family.  The way in which we measure our love affair is by romantic comedy.  I think we measure our holidays by Christmas movies.

What do you remember about Thanksgiving growing up?

Pretty random.  We are poor, so we didn’t even always have food, feasting food.  Depending on my father’s … my father might not be either because he was an alcoholic binge.  Randomly we’d have various people show up.  We have our family house packed then too, so random Indians would show up.  I remember one year, a couple of political prisoners who were thrown into a Spokane jail for illegal salmon fishing, knocked on the door and said that the guards had let them out and said go to the residents, find someone you can have Thanksgiving with.  It was an awesome name for Thanksgiving.  It was David Sohappy, S-O-H-A-P-P-Y, Junior and Senior.

Wow.  What was it like eating dinner with them?

When you were growing up and now too, what did you think of a whole Thanksgiving story about Native people helping out Pilgrims?

I wish we had a tougher immigration policy.  It’s a love story, and it’s still a love story.  We still love you even, if we really are your battered spouse.

Do you still tell the story of Thanksgiving and think about the Pilgrims and the Indians having a meal together?  Or has it become else entirely for you?

I think it’s become that again for us in a lot of ways, the Indians helping out sad white people.

Because the sad white people are the ones who show up who are the brother-in-laws and the abandoned lesbians.

Yeah, and then the thing is, I have a lot of power and privilege in my life now, and the solid marriage and kids.  I am like the Indians living … I feel like I’ve been living well for 15,000 years now, and then all these poor explorers are showing up.

That’s a funny way to think of it.

My family, my wife and sons and I, we’ve made a very stable, safe home.

Do you feel like you’ve been able to make Thanksgiving your own?

Yeah.  It’s interesting.  I’m sitting here waiting for my son, on the bus.  He has his bus route.  He’s made the city’s smaller for himself. He has reinvented the city for his 16-year-old self that he didn’t do when he was 14, and much in the same way you take the holiday and make it yours.  That doesn’t strip it of its original meaning or its context.  There’s still the really sad holiday as well.  It is a holiday that commemorates the beginning of the end for us, the death of a culture.  I guess you could say Thanksgiving is also about survival, look how strong we are.

When I’m talking about it, during the day.  There’s a lot of jokes leading up to those days.  I’m sure I’ll invite white friends over and tell them that we randomly choose one white person to eat, the one with the best marbling, which is a good thing that we choose a white person because if it was everyone, it would probably be me.

You’ve gone soft.  Was Thanksgiving sad for you growing up, or was it a good time?

Really there was always a time for dark comedy.  Thanksgiving for Indians is like a Mel Brooks movie directed by David Lynch.

Maybe you should write that movie.  What do you think would happen in that movie?

What would happen if you and David Lynch and Mel Brooks all told the story of Thanksgiving?

[laughter] I think art would be done, it would be over.  There’ll be nowhere to go after that.  That’s an amazing … I can’t even begin to think about that.  It would star Isabella Rossellini as Sacagawea.

Ha! That would be really good.  What kind of jokes would you grow up telling about Thanksgiving?

How do you talk to your kids about the Thanksgiving story?

You just tell them the truth, the long historical nature of it.  They’re quite aware of what happened to us, the genocide and the way in which we survive and the way in which my wife and I have survived our individual Indian autobiographies.  I guess it’s trash talking, “Look, you tried to kill us all and you couldn’t.”  We’re still here, waving the turkey leg in the face of evil.

Thanks for sharing the Sherman Alexie interview :) Love his humor. He has a nice interview w/ Bill Moyers also --
http://billmoyers.com/segment/sherman-alexie-on-living-outside-borders/

I just fixed that error, thanks for pointing it out. I thought he was just being poetic.

LOL, he wasn't being poetic, he was being RIGHT. I make my own jellied cranberry sauce, but I always mold it in a can. It doesn't taste right otherwise. :)