On their 2006 release Zombie Terrorist, Partyline declared, “we’re scared of zombies, not terrorists” and “yeah I had a mother, she taught me to want more than that”. Yes please. Formed in Washington DC in 2004 by Allison Wolfe of the iconic Bratmobile, Angela Melkisethian and Crystal Bradley, Partyline has a sound reminiscent of riot-grrrl era call and response lady punk. Party, apparently, is tied to the actual act of partying and also to the political connotations of the word, which sums up the aesthetic of the music. You will dance while being educated, end of story. The ladies literally just finished up a tour with Portland, OR rockers Shebeast and just around the corner is an East Coast Tour with Noisy Pig.

Partyline’s sound is not the only thing reminiscent of the riot-grrrl era. Lyrics about the wage gap, ladies being treated like shit by their man friends, the fact that some among us are still “scared of everything they don’t seem to get” (those would be the terrorist zombies, btw), “fat” girls. While it made great strides, there is still work to do since the riot-grrrl movement. Partyline is still fighting the good fight, which is the good news. And with new songs on the way, it can only go up from here.

YESSSSSS!!!
I am so glad you wrote about this! I missed them when they came through Seattle, but, having seen Partyline before, I can safely say that everyone should try to make it to one of their shows. 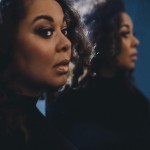 by Katie Presley
Edmonton singer-songwriter Nuela Charles hopes to one day fill the Amy Winehouse-shaped hole in our hearts.