I just happened to stumble upon this inspiring musical project spearheaded by singer, Deeyah (often referred to as the 'Muslim Madonna'), today. She describes it as this:

'Sisterhood' is the collective name for a mixtape project of previously unreleased songs written by young up and coming female Muslim rappers, singers and poetesses from the UK, Europe and US.

Their songs deal with a range of issues that each has been affected by on some level ranging from the war in Iraq to racism, love, romance, living in a post 9/11 world, to women's rights issues, faith and personal experiences of being young socially conscious Muslim women in the West.

Although some of the ladies on the project are at the very beginning of their musical journey and just starting to explore and discover their creative and artistic expression I hope that with this project they will find inspiration and encouragement from each other to further develop and hone their craft.

(Deeyah is a Pakistani-Norwegian singer, composer and human rights activist of Punjabi and Pashtun descent.

I had a listen to a number of the artists and while quite a lot of it is rough around the edges (as mentioned above, most of these women are at the start of their musical careers), it's a really great window to the lives of young Muslim women who are making music in the US, UK and elsehwere. Plus, I admit that I have a real soft spot in my heart for UK Garage (Also known as UKG—it refers to several different varieties of modern electronic dance music generally connected to the evolution of house in the UK in the mid 1990s) and Grime (Grime is a sub-genre of urban music which first emerged in London in the early 2000s, primarily a development of UK garage, dancehall, and hip hop), so it's great to hear some women's voices over these beats for once!

Not all the tracks here are feminist, nor do I doubt that not all of the artists identify as such... but in 'Breakin' Dha Silence', MC Suriya, laments about the struggles of a female rapper trying to get her work heard and Amreen takes inspriation from the honor killing of Zahida Parveen, a pregnant mother of two was mutilated by her husband in response to an alleged affair in her song 'Judge'.

To hear for yourself, check out more of the artists at the Sisterhood website. 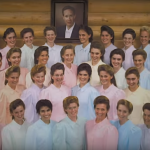 by Sarah Mirk
From Mad Max to Unbreakable Kimmy Schmidt, pop culture is full of stories about patriarchal cults.