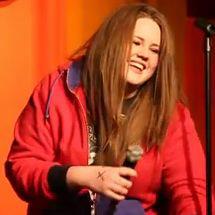 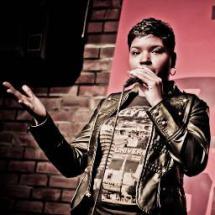 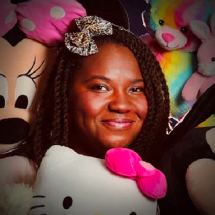 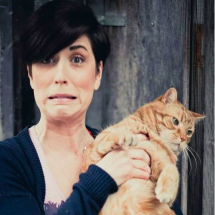 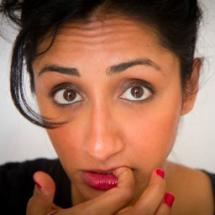 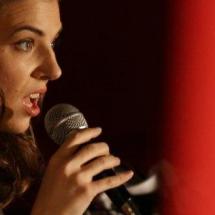 Give these women all of your ticket sales. From the top left: Caroline Bassett, Karinda Dobbins, Rebecca O’Neal, Rhiannon Archer, a cute cat, Kiran Deol, and Eliza Skinner. (Photos via Twitter and Facebook.)

This past weekend, Portland was overrun with an influx of comedians from around the country for the seventh annual Bridgetown Comedy Festival.

The performers at Bridgetown are as varied as the venues: headliners with their own TV shows share space on dive bar stages with comedians who are unknown outside the comedy world. Given that the lineup of most comedy shows is heavy on the dudes, it was exciting to catch the performances of several great female comedians I’d never heard of before. I whittled my list of favorite new comedians down to these six.

Tucked in the tiny tarp-coved back patio of Bar of the Gods, I caught the set of Caroline Bassett.  The 23-year-old delivered a short but sweet set about confusing catcalls, the LDS church, and navigating fat girl friendships in Mexico.  Unfortunately I was the lone audience member translating Bassett’s Spanish punch lines aloud, but even with the interruption, the jokes delivered to English speakers just fine.  This queer comic hails from Austin, Texas and last year was a finalist in her city’s 2013 Funniest Person contest. I bet she’ll be popular outside Austin soon enough.

Next, I took a trip over to a show called “The New Negroes” that featured all Black comedians—and took place on a stage decorated with an ape in hair curlers and sponsored by the company MailChimp.  Several comedians worked the extremely awkward branding into their sets, while MC Baron Vaughn kept the jokes flowing and comics ready to bat.  A seasoned comic himself, Vaughn has performed on the likes of Conan and Late Night with Jimmy Fallon, but the lineup featured a couple performers who have yet to break into those late-night comedy bastions.

From Oakland, California by way of Detroit, Karinda Dobbins seriously killed it.  Dobbins, who poked fun at white naming practices compared to “ghetto” names (if she was rich and white, she jokes her kid would definitely be named Yacht), Hallmark’s bogus Mahogany line of cards for Black folks, and workplace racism. She joined the ranks of stand-up comedians after giving in to her girlfriend’s repeated dares to perform at an open-mic and surprised herself with her talents.  Dobbins has since caused laughter at many Bay Area comedy clubs, headlined San Francisco’s notorious Purple Onion, and was on national television during an episode of NickMom Night Out.

During the same show, Rebecca O’Neal dropped lots of proud nerd knowledge, with some words and references even beyond my own brain.  Mentions of Kinsey, Star Trek, Reddit, and slut-shaming were central, as were her experiences as a “big, nerdy girl in the hood.”  Having been raised in the South Side of Chicago, O’Neal mentioned being confused by the opposite of gentrification happening in her new neighborhood.  The self-described “pansexual hedonist” has been gifting audiences with quips since 2012.  When not performing on stages all around Chicago, O’Neal can be found writing for Vanity Fair and The Rumpus and producing her free monthly BYOB comedy showcase, Congrats on Your Success.

Here’s an on-point video of Rebecca in Chicago doing a bit about how her personality is a mix of Kanye West and Eeyore the donkey:

Sunday evening brought the “All Jane No Dick” showcase with an all-female bill.  Hosted by Barbara Holm, who writes a column for the Portland Mercury called “Don’t Be a Dick”, the seven-performer lineup felt a bit rushed in the allotted time.  Rhiannon Archer brought out a very solid rapport with the audience.  The Toronto-native bragged about how knowing French has created the ability to cast gender upon inanimate objects and confessed how the word misogyny secretly sounds like it would be a sexy thing.  “Misogyny.” Think about it.

Kiran Deol is a British-Indian immigrant living in a Los Angeles, California.  When speaking of class issues, Deol cited across-the-street standoffs with the LAPD as a source of entertainment.  She joked that a groan and a fist pump into the air is her hopeless attempt at fighting the system and she’s seriously considering swapping her $45K Ivy League lifestyle for a $60K one in prison. Before doing comedy, Deol was a filmmaker whose short film, Woman Rebel, was broadcasted by HBO and nominated for an Emmy.  She has since acted in various TV shows and performs standup throughout LA.

Finally, Eliza Skinner finished out the night strong—twice. I first saw her on stage at the “All Jane No Dick” set, where she played up the crazy cat lady/bad at dating shtick. But just an hour later at the festival’s closing show at Alhambra Theater, her bit was completely different. Skinner flawlessly pumped energy through her set, tackling unrealistic gender expectations, sexism, and, my favorite: the shame and temptation of reading Cosmo magazine.  Her stage presence was warm and fully sucked you in. The LA-based comedian does standup in venues and on TV and produced a successful solo show called Eliza Skinner is: SHAMELESS.

My advice: Take the chance to see any of these six comedians before they get so astoundingly famous that they’ll be impossible to see.

Related Listening: Comedians Lizz Winstead and Aparna Nancherla talk with us on our Funny Business podcast.

Emilly Prado is a former Bitch editorial and new media intern who studied social work and education at Portland State and has since been juggling various child-related jobs and writing gigs.