Thousands rallied in protest of George Zimmerman’s “not guilty” verdict in New York, left, and San Francisco on Sunday.

It’s the day after a jury found George Zimmerman not guilty of murder or manslaughter for killing unarmed Florida teen Trayvon Martin and it feels like everyone is still a little in shock—shocked and angry, shocked and sad, shocked and cynical.

But some people have managed to sort their emotions into solid analysis of the verdict and trial. What is emerging is a narrative that this verdict is a high-profile example of flaws in our justice system that perpetuate racial bias on a daily basis. Thousands of people in New York, San Francisco, Denver, Portland, Washington DC, and cities in between are staging protests of the “not guilty” verdict today, but Trayvon Martin’s case is just one example of many problems that are built deeply into the infrastructure of our society and that we don’t talk about often.

As Roxane Gay at Salon says:

This verdict tells us everything we need to know about our laws, whom they are designed to protect, and why. It tells us about the power of the gun lobby, the power of stereotypes, and the value of a black person’s life.

Black men and women, black boys and girls, will continue to live in a world where they are guilty until proven innocent, and where their lives matter less in a justice system that is anything but blind to race…

We need to consider the bigger picture. What happened to Trayvon Martin is not a problem with Florida. We can joke about the Sunshine State and its supposed backwardness. We can pretend Zimmerman’s acquittal wouldn’t have happened elsewhere. That simply isn’t true. Though Florida’s “Stand Your Ground” law contributed significantly to Zimmerman’s acquittal, the root of the problem reaches far deeper and stretches all across these United States. We must forget the convenient narrative that racism only thrives in the South. Racism is an American problem.

Andrew Cohen at The Atlantic also notes that the verdict tells us sad facts that we already know:

To me, on its most basic level, the startling Zimmerman verdict – and the case and trial that preceded it – is above all a blunt reminder of the limitations of our justice system. Criminal trials are not searches for the truth, the whole truth, and nothing but the truth. They never have been. Our rules of evidence and the Bill of Rights preclude it. Our trials are instead tests of only that limited evidence a judge declares fit to be shared with jurors, who in turn are then admonished daily, hourly even, not to look beyond the corners of what they’ve seen or heard in court.

Trials like the one we’ve all just witnessed in Florida can therefore never fully answer the larger societal questions they pose. They can never act as moral surrogates to resolve the national debates they trigger. In the end, they teach only what each of us as students are predisposed to learn. They provide no closure, not to the families or anyone else, even as they represent the close of one phase of the rest of the lives of the people involved. They are tiny slivers of the truth of the matter, the perspective as narrow as if you were staring at the horizon with blinders on, capable only of seeing what was not intentionally blocked from view.

The bigger picture in this case is not whether George Zimmerman is racist or not, but how the justice system and our laws around guns allow for racial bias. Jelani Cobb at the New Yorker discusses the way written and unwritten rules around discussion of race affected the trial.

Before the trial began, Judge Deborah Nelson forbid use of the term “racial profiling” in the courtroom. At first, it seemed that the order would insure that throughout the trial race would be addressed the same way it was outside her courtroom—that is, by talking around it. Instead, it meant that by the closing arguments it was easier to recognize that race is just part of the problem. The logic of profiling itself is on trial.

Without a racial element the trial would never have happened. Not just because George Zimmerman, like so many others, probably wouldn’t have registered a white teen-ager as a criminal threat but also because a brew of vicarious grief, common experience, and the history of race in this country is what drove the crowds to don hoodies and gather around the country. It’s not simply that if President Obama had a son he’d look like Trayvon—it’s that millions of us have sons, brothers, and cousins who already do.

Looking at the problems with this case, trial, and verdict, means looking at the role race and monied interests play in the laws that protected George Zimmerman. Back in February, Colorlines made this chart of similar laws across the United States, noting that this is not just a problem with one “racist or not racist” guy in Florida. A key piece of their story:

The Tampa Bay Times did an analysis of 200 Stand Your Ground cases in Florida and found that it was inconsistently applied. The paper found that nearly 70 percent of those who invoke the statute go free. But—most importantly—the study found that an astonishing 73 percent of defendants whose victims were black faced no penalty, as opposed to 59 percent of those who killed a white person.

Sociological Images provides some more crucial data on the tragic reality that Stand Your Ground laws perpetuate the systemic racism of our courts. They quote the research of John Roman and Mitchell Downey, who dug into 4,650 FBI records of homicides in which a person killed a stranger with a handgun. The reseachers concluded that a Stand Your Ground law “tilts the odds in favor of the shooter.”  Here is professor Lisa Wade’s analysis:

It’s simple: We are already biased in favor of the white defendant and against the black victim. Stand your ground laws give jurors more leeway to give defendants the benefit of the doubt.  This increase even further the chances that a white-on-black homicide will be considered justifiable because jurors will likely give that benefit of the doubt to certain kinds of defendants and not others. Stand your ground may or may not be a good law in theory but, in practice, it increases racial bias in legal outcomes.

Finally, Florida resident Faiqa Khan of Native Born provides an answer to the big question everyone is thinking today:

Someone pleaded today, “What can I do?”

Hold yourself accountable for the tiny ways in which you might be making this problem bigger. You’re not a racist, of course. I’m not either. But that doesn’t mean that we don’t unconsciously harbor sentiments which are so deeply ingrained with racist ideology that it is no longer visible to us. I think, too, and this is going to be controversial… we have to let go of relativism when it comes to tolerance and acceptance. Be unrelenting. Be ever vigilant. But, of course, be kind.

Look at what you believe — observe yourself, your words and your ideas in the context of humankind’s very necessary journey to a peaceful existence. Our continued existence is fully determined by our ability to take a stand in the service of our preservation.

One remarkable acquittal is enough.

Let’s not acquit ourselves, too. 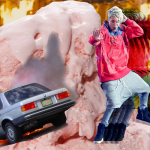 by Katie Presley
Stick to the questionable-but-danceable jams about failed communication with your romantic partners, Biebz. Sing what you know.