Six Questions for Jessica Hopper on Girls' Guide to Rocking

There may be no one better to teach girls how to rock than music and culture critic Jessica Hopper. She’s clocked massive amounts of hours as a tour manager, band publicist, DJ, touring bassist, Girls Rock Camp booster, and fanzine publisher. Her “music-is-my-life” credo and infectious passion for young women and feminism are evident from even a split-second glance at her work. Now she’s just released her first book, The Girls’ Guide to Rocking. Heard of it yet? Perhaps you’ve seen the kick-ass promo.

Page Turner interviewed Hopper recently about her life as a teenage feminist, how she gave herself over to punk rock, and why she wanted to reverse the thinking behind 50 years of boy-heavy rock ‘n’ roll. Page Turner: The Girls’ Guide to Rocking is a truly comprehensive how-to for teen girls that leaves no part of the music creation and promotion process out—not even the specs for John Bonham’s drum kit. Tell me what kind of void you wanted to fill with your book in the young adult nonfiction landscape?

Jessica Hopper: I wasn’t thinking so much about the lit landscape when I was writing, but rather the rock landscape, and that I wanted to make something that could help girls and young women turn their love of music into bandom. I think every girl should start a band, have music as a creative outlet, and get to go on tour at least—doing those things myself, those were some of the most freeing and fun experiences of my life. I just want to encourage other girls along that path.

PT: In some ways, you weren’t a so-called “typical teenager”: You started self-publishing an influential zine, “Hit It or Quit It,” at 15, you were part of the Riot Grrrl movement, and you played and toured with bands because you knew early on that you didn’t want to be part of any passive-girl-fawns-over-guy, rock-show scenery. As you write in the Girls’ Guide introduction, “When I fell in love with music…I soon fell in love with the idea of making it, too. I didn’t want to listen to songs; I wanted to participate.” Who or what were the biggest influences on your DIY ethos, and how did self-publishing, Riot Grrrl, and music-making change your life as a teen?

JH: Riot Grrrl gave a shape and name to my teen rage. I was raised by a feminist mom—my bedtime-stories book growing up was Stories For Free Children, which was published by Ms. magazine in the late seventies, and so I was indoctrinated from about three onwards.

I always had a real awareness and interest in feminism, and at 15, I found out about punk and gave my life over to it instantly. But I was angry and annoyed by how dude-dominated it was. Bikini Kill zine, seeing Fugazi, seeing Babes in Toyland—those were three biggies, music-wise, as a teenager. All three were YES YOU CAN writ large. Seeing Karen Finley perform, on a whim, when I was 16—like her post NEA-grant era when she was just pure fire—was like getting struck by lightning. I remember watching her perform and crying, because she was expressing these thoughts and feelings I had about being a woman in the world—SHE WAS PISSED!—that were, for me, inexpressible still.

That same year, at the museum by my parents’ house, the Walker Art Center, there was the first major Fluxus retrospective—heavy on the Yoko [Ono]. Those were the major influences and liberating works for me. I was lucky to be exposed to such powerful stuff.

Past that, getting into music and making a fanzine really just helped me escape teenagerhood. Contributing to the scene, rather than being a spectator or a passive consumer, made all the difference. Making a zine and having other people actually read my writing and opinions and being part of whatever minor cultural dialogue I was part of—other riot girls, other music geeks, other weird kids of the middle west—I felt like my voice mattered. Even though it was a Xeroxed, 300 circulation thing, I had a broadcast, and it was like…I never felt like I would or could be truly marginalized past that point.

PT:You wrote an influential essay, “Emo: Where the Girls Aren’t,” for Punk Planet, which went on to become an important and influential feminist statement about young women and the emo genre. What were you responding to in the music scene at the moment you wrote the essay, and what did you hope to achieve for young women by publishing it?

JH: I was aiming for a kind of Feminine Mystique for girls who went to hardcore shows (haha)…I don’t know if I had a really specific aim other to unpack this feeling I had. It was the first long essay I ever wrote—and it took 18 months to finish. I knew a lot of people would not get it, and so it needed to be solid. Rock ‘n’ roll is about loving and losing women—and has been for the last 50 to 60 years—and so calling that bluff meant I really had to think about how to go about it.

I just had this feeling of “something isn’t right,” and I was spending entire shows watching girls in the front row, rather than bands, and how they acted and reacted to emo bands. I wanted to save girl lives, enact some sort of paradigm shift in whatever way I could—get dudes in bands to think about what they were communicating.

PT: In a recent interview you said that after the essay was published, you got mail about it every day for three years—half of it from girls telling you their stories. I know we’re talking three years of mail here, but will you share some of the most compelling stories you heard from girls in response to the piece and how their stories affected you?

JH: The one I remember most was from a woman that managed a really popular band. She had an established and respected career in the music industry. She wrote to me, telling me about some of the daily struggle to be taken seriously—people making jokes about how she must be someone’s girlfriend in the band, that it was such an ordeal to get respect. I was kind of stunned, because here she was at the top rung and still getting hassled.

A lot of the e-mails and letters I got were from young women who were just starting bands, and so inspired and so in love with music, and were soldiering against the sexism they encountered in their scene, which made me sad, of course. But it was also so inspiring to hear about their lives and what they were getting out of playing music.

PT: You’re about to go on book tour for Girls’ Guide to Rocking. Tell me what’s planned for the tour and, literally, what you hope a teen girl coming into a reading not knowing anything about you or the book will take away from it.

JH: At a couple of the readings/book events on this first part of the tour, there are going to be young girl bands playing, which I hope is sort of the extra inspiration or motivating force. Me reading and sharing my experience is one thing, but seeing an example of “see, you can do this too!” will hopefully make something click for young girls.

PT: Your book has a wonderful respect for the beginner’s journey—in the chapter “Making the Band,” you write: “There is plenty of time ahead for you to be studied and serious; when you are a beginner, the main thing is to have a good time, all the time.” In a sense, the book is an invitation for young women to gain freedom and self-confidence through exploring music. Why do you think this an important message for young women in our culture right now?

JH: Right now in pop music and mainstream rock, we’re finally seeing teenage girls—Taylor Swift being the prime example—and their reality reflected in songs on the radio. Rock ‘n’ roll for the last 50 years has mostly been men singing about loving and losing women. I think we’re finally starting to see a shift that lets girls know that rock ‘n’ roll belongs as much to them as it does any dude.

For more on Girls’ Guide to Rocking, check out the book site.

OH!!! Very coool.....Girl Riot!!! YES! I remember......What a Great Post!! I totally identify with this in so many ways! I too, used to question, Why is music so male dominant...It made No sense to me...MUSIC is and has been a huge part of "Therapy" for me. From being the listener,relating to, giving a voice, validation and confirmation to how and what i was feeling/thinking.....From the Angriest of melodies to the Tranquil.... Playing music is another Awesome RELEASE......We still do drum circles, just to let "IT" out...Feeling,Flowing,meditating....Music is life...and Our Heart beat the Drum : ) Thank You For This article : ) 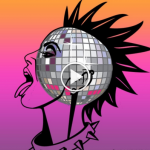