Happy Monday! I wanted to offer something a little light-hearted to start off the week, so I decided to dedicate this post to a few fierce fat female recording artists that have rocked my world and provided a counterpoint to how fat women are viewed in society. These women are all in control of their own image, their own unique styles, and have managed to find success in an industry that isn’t all that friendly to non-Katy Perry looking women.

Martha Wash is a big reason why vocal credits are listed on albums now. Back in the ’90s, she did the vocals for C+C Music Factory’s “Gonna Make You Sweat” but in the music video, a thin woman was featured lip syncing to Wash’s vocals. She sued for royalties and won. Wash is actually a favorite among gay men and regularly performs at LGBT events. Her story illustrates the prejudice displayed by the music industry against fat women—they didn’t want Wash to appear in the video due to her size.

Jill Scott also appears on TV in The No. 1 Ladies Detective Agency on HBO. She’s one of my favorite singers and has always represented fierce fat women to the fullest as well as holding it down for the natural sisters out there. Jill has made forays onto the big screen as well, appearing in Why Did I Get Married? and Why Did I Get Married Too? This video is my favorite of hers, if only for the wig yanking.

Although she’s smaller than when she first came out, Missy Elliott is still larger than your average pop starlet. And when she first came out, she ignored pretty much every fashion “rule” for fat chicks—her first video, “The Rain (Supa Dupa Fly)” featured her dressed in an inflated garbage bag of a jumpsuit. Repping for the smaller fats now, her style hasn’t changed. She’s still as unique (and multitalented) as ever.

When she was nominated for an Oscar back in 2002 (for Chicago), Queen Latifah caused a fashion uproar by simply being fatter than the average screen siren. Designers lined up to dress her for the Oscars, the coming of the plus size revolution was trumpeted, and she got contracts for various cosmetic and fashion companies. It wasn’t until Mo’Nique and Gabourey Sidibe were nominated that another fat actress received the amount of fashion designers fawning over them that Latifah did. Back in the 00s, she was our fat icon.

Fashion’s current fat darling, Beth Ditto, has contributed a great deal artistically to getting representations of fat bodies out there with no holds barred. Frequently appearing naked in magazines, Ditto wears tight, revealing clothing on the regular and has no qualms with showing her body in what many would consider “unflattering” ways. She’s teamed up with UK fat fashion retailer Evans to create two collections of clothes reflecting her personal style. Even noted fatphobe Karl Lagerfeld had to act like he could stand being next to a fat person for a while to take pictures with her at Fashion Week—and she played a private Fendi party.

Adele is a Grammy award-winning fat UK soul singer with an amazingly evocative voice and a quirky personal style. Have you noticed the best soul singers are usually fat? It’s our superpower. Like so many other fat women in the music industry, she’s been thrown shade by the fashion powers-that-be, namely Vogue magazine, but Anna Wintour’s fear of fat has been documented for ages now.

An honorary mention goes to two former fats, Jennifer Hudson and Jennifer Holliday (from the Broadway production of Dreamgirls. Here they are belting out the signature song from the movie/musical that made them both famous–when they were fat. Although I think this was shot pre-Weight Watchers for J.Hud. It’s sad to lose them, but odds are they’ll be back. We’ll save seats for you, divas.

I was so sad when I caught the first Jennifer WeightWatchers commercial. I know we've all gotta do what we gotta do, and JH never claimed to represent fat chicks but I felt like she sold us all out.

thats terrible of you. She shouldn't be scrutinized for wanting to be healthier and live longer. I'm sorry you feel like she 'sold you out'. Shes busy showing women its possible to live life better and longer even if you're jennifer hudson.

There are plenty of chubby and fat folks out there living fabulous, long lives that completely contradict whatever point you were trying to make. There's more than one way to be healthy, and many of those ways do not involve Weight Watchers.

While WW's model of weight loss is somewhat healthier than many of the weight-loss regimes out there, let's not forget that they are a giant corporation who actually really don't care about women's health. They are in business to exploit and make money off of our culture's anxiety over bodies and body size - they made about 1.4 BILLION USD in 2009 alone.

Erin is right; just because someone is fat doesn't mean s/he won't live as long as a thin person, or that s/he is living life better in some way. And while you're correct, Anonymous, that Hudson has a right to do whatever she wishes with her body, her ads for Weight Watchers frame her weight loss in a problematic way (equating weight loss with self-empowerment).

Thanks Erin also for pointing out that WW isn't exactly a nonprofit organization out to better humanity.

It's really almost impressive how when it comes to fat and body size/shape/health, everyone seems to keep missing the point. I really recommend re-reading Tasha's Size Matters posts from the beginning, and also this:
http://www.feministe.us/blog/archives/2010/09/07/fat-and-health-a-response/

And then maybe stop, breathe and think long and hard before you type.

Hahaha I love Lagerfeld's face in the picture you linked to, he's all "ew I just pooped my $6000 pants out of fear of this fat lady"

check out mexico's paquita la del barrio with 'las mujeres mandan' (roughly translated as 'the women are in control.')

Ugh, there's a similar discussion going on Jezebel. Just because they are no longer fat doesn't mean you 'lost' them. They didn't die you know. How about respecting what people who do don't know do with their bodies. Why is it that when fat icons lose weight they somehow commit a Jedas like crime against their fans.

AND you forgot Faith Evans!

If I understood Tasha correctly, she meant no disrespect to the formerly fat divas she mentioned. She only meant to point out that they are no longer fat, thus they have been "lost" to the fat diva canon (because now they are nonfat divas).
____________
<b>Kelsey Wallace, web editor</b>

Relevant: “To The Bone” Relies On An Old AF Male Savior Narrative 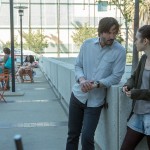 by JoAnna Novak
There’s nothing new about the wise male savior rescuing the troubled girl.