Slaves to the Lifestyle: The Bling Ring, Kanye West, and Celebrity Consumption With the leak of Kanye West’s latest album, Yeezus, we finally got to hear the latest from the polarizing and brilliant rapper. There are many reasons to critique Kanye’s work—his misogyny, his ego, his absurd New York Times profile—but his new songs are part of the emerging canon of consumption-based, celebrity-fueled lifestyle that is dangled constantly in front of us.

This is precisely the world Sofia Coppola’s new film The Bling Ring explores. The Bling Ring, based on a true story reported in 2010, tells the tale of of a group of upper-class Calabasas teens who rob celebrity homes.

The song on Kanye’s new album pairs well with The Bling Ring is “New Slaves.” The song is a complex commentary on race and slavery: West tells us that historical oppression, the prison system, consumerism, and corporations have created a new kind of slavery.  West raps about “spending everything on Alexander Wang” and “I throw these Maybach keys,” critiquing our dependence and desire of name brand goods. He also targets the paparazzi, saying:

I’ll move my family out the country/So you can’t see where I stay/So go and grab the reporters/So I can smash their recorders.

Within the song, West rejects both consumer and celebrity culture, illuminating how being chained to objects creates toxicity within our culture. However, the contradiction here is that West, of course, is no stranger to the celebrity lifestyle. Unlike many of us, West has the ability to both have Maybach keys and to casually toss them away.

While Coppola’s film holds no racial commentary—except inadvertently through its “whitewashed” casting—The Bling Ring explores the same message as “New Slaves”: We are slaves to celebrity and consumer culture, and try desperately to create the idea of “fame” through carefully cultivated online personas. Coppola’s film simultaneously glamorizes and critiques this group of teens—and pinpoints the contradictory nature of our relationships to celebrity and consumer culture.

Sofia Coppola is arguably one of the best filmmakers to capture the achingly annoying experience of being stuck in an arrested state (especially as a teenager) as showcased in The Virgin Suicides, Lost in Translation, and Marie Antoinette. She takes these talents to tell the story of Marc (Israel Broussard), a shy teen who has just transferred schools and who falls hard for resident glamorous mean girl Rebecca (Katie Chang). Rebecca immediately takes Marc under her wing, and they bond over their love of celebrities and fashion.

Rebecca has more than a small problem with stealing. During a weed-fueled celebrity-gossip session, the pair discovers that Paris Hilton is out of town. Rebecca suggests that they break into her home, having deduced that Hilton seems like the type to leave her key under the mat.

The exhilaration of “shopping” at Hilton’s sets in motion a brief spell of invincibility of these teens. They’re joined by friends Chloe (a hilarious Claire Julien), wannabe model/actresses Sam (Taissa Farmiga), and Nicki (a pitch-perfect Emma Watson) in ransacking celebrity homes and seemingly attaining the lifestyle they so desperately needed to acquire. In real life, the fashionable squad robbed Rachel Bilson, Audrina Patridge, Lindsay Lohan, and Orlando Bloom, in addition to Hilton, and ended up with more than $3 million dollars in stolen loot. But inevitably, everything falls apart.

Coppola is a master of the montage, and in The Bling Ring she excels. She fills the film with close-ups of designer shoes, bags, and clothes interspersed with paparazzi and red-carpet footage of the burgled stars. The result is a frantic oversaturation of (as Marc would say) “beautiful gorgeous things.” Coppola contrasts these scenes with the gang’s Facebook photos: Swathed in their celebrity clothes at the hottest clubs, they pose artfully with fans of cash and Grey Goose bottles. Their perfectly studied expressions match the ones of their favorite celebrities.

Coppola shows the contradictions present among upper-middle-class kids who seemingly have everything, but still want more. Beyond the material things, what the teens want is recognition. When Rebecca is eventually interrogated by the police, the detective mentions speaking to the celebrities the group robbed. Rebecca can’t stop herself. “Did you talk to Lindsay?” she asks. “Well, what did she say?”

This extreme grasping for attention is a distillation of the generally torturous experience of being a teenager. The film’s small, quiet moments speak volumes: When Marc dresses for school, he hesitates, glancing in the mirror and questioning whether to button his shirt to cover his t-shirt-clad midsection. While much of the film feels like an intimate critique, Coppola sometimes slips into glamorizing the lifestyle the teens desire. In a slo-mo coke fueled night at a club before they’re busted, the group jubilantly dances to pulsing music and indulges in bottle service while wearing their stolen goods. While such scenes serve as a last hurrah of sorts, there’s no question thar they paint this lifestyle as dersirablet, as do similar moments where the camera lingers on closets full of designer goods. It’s critique that also drools desire.

Every member of the group was eventually caught and put on trial, but the motivation for the crimes remained murky. When asked why he stole celebrity’s clothes, so-called Bling Ring ringleader Nick Prugo responded that they “wanted to be part of the lifestyle, the lifestyle we all sort of want.”

Prugo’s statement reflects that, with the explosion of reality TV and social media, there’s a feeling that everyone can be a bit of a celebrity. Living in Los Angeles, the self-conscious hallmarks of “making it” are everywhere. The glitzy world of celebrities all feels very close: One tweet, one crucial connection, one credit-card bill could win you the perception (at least) of being one of the beautiful people.

This lifestyle is, ironically, something the Bling Ring members actually attained thanks to their crimes. Their trial coverage became famous on TMZ footage, their photos were in Vanity Fair, and Bling Ring member Alexis Neiers starred in her family’s own reality-TV show, Pretty Wild.

In New York Times film critic A.O. Scott’s excellent article “Gatsby, and Other Luxury Consumers,” Scott looks at the recent trend in films like The Bling Ring, The Great Gatsby, and Spring Breakers and how they take a fetishized look at consumerism. Instead of providing any sort of cultural commentary, these films end up reinforcing the mainstream desire for what we can’t have:

One of the great paradoxes of modern consumerism is that these goods are mass-market signifiers of exclusivity, tokens of aristocratic populism. We may not be able to afford them, but we are invited to believe that we still deserve them, and that their acquisition will be the fulfillment of a dream.

While Scott primarily focuses on material goods, his argument can also be made for the idea of celebrity. These days, regular Americans desire recognition on an extreme level. We feel that we deserve some sort of attention for whatever it is we’re doing and, through technology, are often granted an instant and potentially vast audience. With the rise of reality television and social media, the lines of celebrity are further blurred. Teen Moms grace the covers of People. We can acquire the same dress that Lindsay Lohan wore to court, we can count our self-worth in likes on Instagram. We are in a constant state of consuming or being consumed.

But the idea of celebrity is a temporary and tenuous concept: Someone who has been deemed the “next big thing” may have a long and fruitful career or instantly disappear. Pretty Wild blipped out of existence after only one season, serving only to rake Neiers publicly over the coals.

After seeing The Bling Ring, I gathered with friends to talk about the film over drinks at a West Hollywood bar. Kanye West thumped on the bar speakers. Across the room, we spotted none other than real-life Bling Ring victim Audrina Patridge. She was doing exactly what we were: drinking and dancing with her group of friends.  In the meta swirl of Hollywood, I questioned if Patridge was living our “lifestyle” or we hers. Was she trying to blend in with the regular crowd? Were we trying to live like celebrities? I had no answers, the lines are too blurry. Instead, I found an excuse to tell Patridge that I liked her hat.

It's very contradicting for Kanye singing this and then have his own designer shop/label and be in a personal relationship to someone that is a slave to fashion, consumerism and celebrity culture/ endorsements. As for the movie, this is not the first attempt to put this story on a film and I think the message will get lost due to so many contradictions as of anything in this culture. 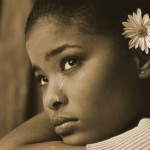 by Jenn Jackson
These instances are about our collective avoidance of consent and the rape culture.